"Passive" labor market policies involve paying money to the unemployed, like with unemployment insurance. "Active" labor market policies involve a range of programs to assist the unemployed with finding jobs. In both categories, the US has long lagged well behind other high-income countries. Chad P. Bown and Caroline Freund review the evidence in "Active Labor Market Policies: Lessonsfrom Other Countries for the United States" (Peterson Institute for International Economics, January 2019. 19-2).

Here's the difference in spending on passive and active labor market policies across countries. Notice that the US is second from the left, above only Mexico in this comparison group of OECD countries. 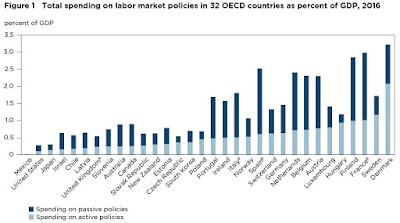 Not all active labor market policies are created equal. As different policies have been used and then studied in different countries, a body of evidence has built up that is overviewed by Bown and Freund. They write:


"The evidence documented in this paper shows that many other countries deploy “active” labor market policies (ALMPs) that have been more effective than those in the United States. Programs in other countries under review have improved the possibilities of workers and firms matching up with each other’s needs, and when these efforts have fallen short, governments have sometimes created jobs in the face of intractable local conditions. The research demonstrates that job placement services, training and education, wage subsidies, and other adjustment policies have been proven effective in helping workers find employment and stay in the job pool. Although public works programs and direct job creation have also been tried to address the problem, these programs tend to be ineffective in helping workers over the long run. ...

Here's a table from the authors summarizing the state of knowledge about active labor market policies. 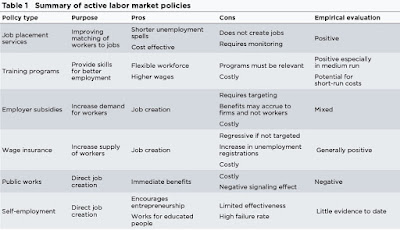 There's a lot of talk in the US about problems faced by workers who have a hard time finding jobs, or who are displaced from their jobs. The menu of policy responses at this point seems to involve either: blame it all on the Chinese and impose tariffs, or have the government guarantee everyone a job. I view both of these options as posturing. Active labor market policies certainly aren't the only step toward building connections between US workers and potential employers, but they could be a useful step. While I don't think such programs would pay for themselves, a substantial part of the cost could be covered by the lower need for other government payments like unemployment insurance, disability, Medicaid, and other programs. Bown and Freund write:


The United States currently spends about 0.1 percent of GDP on active labor market policies, compared with an average of 0.5 percent of GDP in 31 other OECD countries. Bringing the United States to the average could help stem the decline in labor force participation, return millions of working-age Americans to employment, supporting their well-being and US economic growth.

I try to beat the drum for active labor market policies every now and then. Some previous posts include: