A lot of people have heard, one way or another, that the country of Bhutan decided back in the early 1970s to pursue Gross National Happiness. The King at that time is supposed to have said:  “Gross National Happiness is more important than Gross Domestic Product.” But in practical terms, what does that actually mean?  Sriram Balasubramanian and Paul Cashin describe "Gross National Happiness and Macroeconomic Indicators in the Kingdom of Bhutan" in IMF Working Paper WP/19/15 (January 2019). They write:


"In this context, this paper will look at the relationship between the evolution of GNH and the evolution of GDP and other macroeconomic indicators. ... Using the case of Bhutan, this paper will examine the relationship between GDP growth and happiness (or well-being), using subjective well-being measures such as surveys of nationally-representative samples of the population (such as the GNH Surveys). That is, we will examine whether GDP growth is a useful proxy for and conduit to happiness, and whether happiness-driven policies can help raise economic growth rates."

At present, the working definition of Gross National Happiness in Bhutan involves four "pillars:" Sustainable and Equitable Social and Economic Development, Preservation and Promotion of Culture Conservation of the Environment, and Good Governance. These  in turn divided into nine "domains," which are then divided into 33 "indicators," which are measured by 124 variables, each with their own weights.  For a rough sense, here are the nine "domains" and what they are meant to cover. 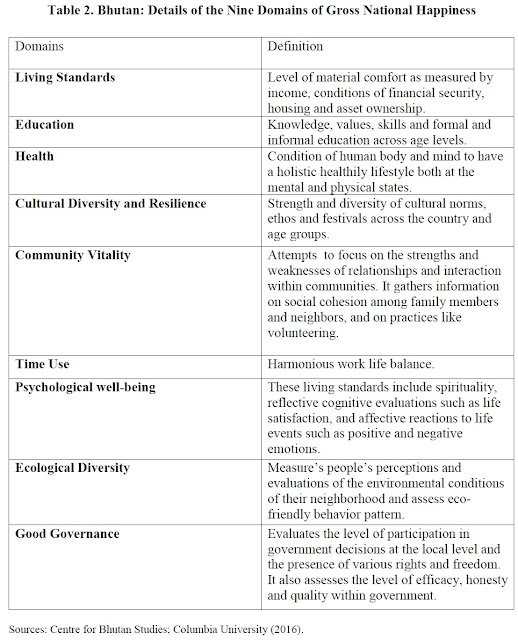 Although the idea of Gross National Happiness has often been invoked in Bhutan since the 1970s, attempts to measure it with 124 indicators are more recent, and in fact have only been done in
directly are in 2008, 2010, and 2015. The authors explain: "To measure GNH, a profile is created for each person showing in which of 33 grouped indicators (formed from the abovementioned 124 indicator variables) the person has achieved sufficiency. As noted by the Gross National Happiness Commission (2015), not all people need to be sufficient in each of the 124 variables to be happy. Accordingly, in tabulating the Survey results the Commission divides Bhutanese into four groups depending on their degree of happiness, using three cutoffs: 50%, 66% and 77%."

Thus, a comparison between growth of per capita GDP in Bhutan and the Gross National Happiness Index for these three years looks like this. 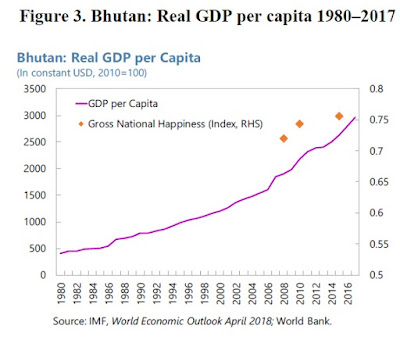 From 1980 to 2017,  Bhutan's per capita GDP rose by a factor of 6, thanks in part to the development of its energy sector and to expanding trade ties with India. But given the data, it doesn't seem possible to say if Gross National Happiness has also risen sixfold.

So what are we to make of Bhutan's Gross National Happiness?

1) It is bog standard economics that GDP was never intended to measure happiness, nor to measure broader social welfare. Any intro econ textbook makes the point.  A well-known comment from "Robert Kennedy on Shortcomings of GDP in 1968" (January 30, 2012) make the point more poetically. But for those who need a reminder that social welfare is based on a wide variety of outcomes, not just GDP, I suppose a reminder about Gross National Happiness might be useful.

2) Bhutan's measurement of 124 weighted indicator variables, and their distribution through the population,  is probably about as good a way of measuring Gross National Happiness as any other, and better than some. But it's also pretty arbitrary in its own way.

3) The interesting question about GDP and social welfare isn't whether they are identical, but whether they tend to rise together in a broad sense. For example, countries with higher per capita income also tend to have more education and health care, better housing and nutrition, more participatory governance, and a variety of other good things. .A few years ago I wrote about "GDP and Social Welfare in the Long Run" (April 6, 2015), or see "Why GDP Growth is Good" (October 11, 2012).

4) "Happiness" is of course a tricky subject, which is why it's the stuff of literature and love.  After a lot of consideration, Daniel Kahneman has argued that "people don't want to be happy."  Instead, they want to have a satisfactory narrative that they can tell themselves about how their life is unfolding. If incomes, education, and life expectancy rise over, say, 40-50 years but on a scale of 1-10 people don't express greater "happiness" with their live, does that really mean they would be equally happy with lower incomes, education and life expectancy--especially if other countries in the world were continuing to make gains on these dimensions? There is an ongoing argument over whether those who have higher income express more happiness because they get to consume more, or because they feel good about comparing themselves who are worse off. It's easy to say that "money doesn't bring happiness," and there's some truth in the claim. But for most of us, if we lived in a country with lower income levels and could watch the rest of the world through the internet and television, it would bug us at least a little, now and then.

It seems to me easy enough to make the case that looking at Gross National Happiness as is better than an exclusive focus on doing nothing but boosting short-term GDP. But outside the fictional mustachio-twirling econo-villains of anti-capitalist comic books, no one actually believes in an exclusive focus on GDP. For me as an outsider, it's hard to see how Gross National Happiness has made Bhutan's development strategy different. After all, lots of countries at all income levels emphasize lots of goals other than short-term GDP. And the government of Bhutan pays considerable attention to GDP, as the authors note, "While there is importance given to GNH in Bhutan, governmental organizations (especially commerce related ones) focus keen attention on GDP and how it measures trade, commerce and the economic prosperity of the country. In addition, the IMF has provided a great deal of technical assistance to Bhutan to help improve its national accounts ..."

My own favorite comment on the connection from GDP to social welfare is from a 1986 essay by Robert Solow ("James Meade at Eighty," Economic Journal, December 1986, pp. 986-988), where he wrote: "If you have to be obsessed by something, maximizing real National Income is not a bad choice." At least to me, the clear implication is that it's perhaps better not to be obsessed by one number, and instead to cultivate a broader and multidimensional perspective. If you want to refer to that mix of statistics as Gross National Happiness, no harm is done. But yes, if you need to pick one number out of all the rest (and again, you don't!), real per capita GDP isn't a bad choice. To put it another way, a high or rising GDP certainly doesn't assure a high level of social welfare, but it makes it easier to accomplish those goals than a low and falling GDP.