As Thanksgiving preparations arrive, I naturally find my thoughts veering to the evolution of demand for turkey, technological change in turkey production, market concentration in the turkey industry, and price indexes for a classic Thanksgiving dinner. Not that there's anything wrong with that. [This is an updated, amended, elongated, and cobbled-together version of a post that was first published on Thanksgiving Day 2011.]

The last time the U.S. Department of Agriculture did a detailed "Overview of the U.S. Turkey Industry" appears to be back in 2007, although an update was published in April 2014  Some themes about the turkey market waddle out from those reports on both the demand and supply sides. The production of turkey remains an industry that is not very concentrated, with three relatively large producers and then more than a dozen mid-sized producers. Here's a list of top turkey producers in 2017  from the National Turkey Federation, as measured by millions of pounds of liveweight processed. 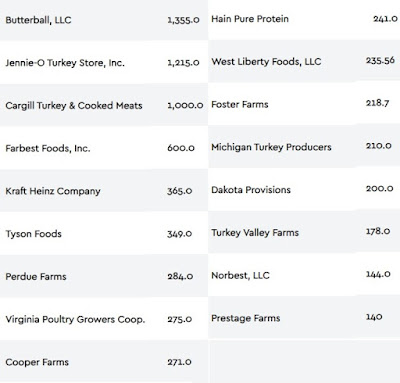 Given this reasonably competitive environment, it's interesting to note that the price markups for turkey--that is, the margin between the wholesale and the retail price--have in the past tended to decline around Thanksgiving, which obviously helps to keep the price lower for consumers. However, this pattern may be weakening over time, as margins have been higher in the last couple of Thanksgivings  Kim Ha of the US Department of Agriculture spells this out in the "Livestock, Dairy, and Poultry Outlook" report of November 2018. The vertical lines in the figure show Thanksgiving. She writes: "In the past, Thanksgiving holiday season retail turkey prices were commonly near annual low points, while wholesale prices rose. ... The data indicate that the past Thanksgiving season relationship between retail and wholesale turkey prices may be lessening." 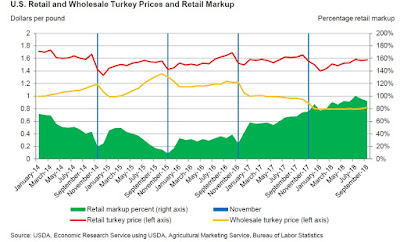 In the past, the US turkey industry has at some times suffers from outbreaks of HPAI
(Highly Pathogenic Avian Influenza): for discussion of the 2015 outbreak, see the November 17, 2015 issue of the "Livestock, Dairy, and Poultry Outlook" from the US Department of Agriculture, where Kenneth Mathews and Mildred Haley offer some details. But for Thanksgiving 2019, supply seems to have remained strong and wholesale turkey prices have stayed low. 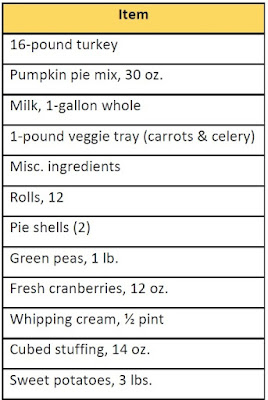 Thanksgiving is a distinctively American holiday, and it's my favorite. Good food, good company, no presents--and all these good topics for conversation. What's not to like?
Posted by Timothy Taylor at 9:00 AM