Production, Use and Fate of All Plastics Ever Made

Back in 2005, the American Film Institute released a list of the 100 most memorable and lasting bits of film dialogue of all time. The first two, for example, were ""Frankly, my dear, I don't give a damn"
and "I'm gonna make him an offer he can't refuse." Number 41 on the list was "Plastics." from the 1967  film The Graduate, which won Oscars for Best Picture, Best Director, Best Actor (Dustin Hoffman) and Best Actress (Anne Bancroft).

In that movie, the dazed-and-confused soon-to-be college graduate Benjamin Braddock, played by Dustin Hoffman, is drifting through a dinner party full of his parents' friends. One of his father's well-meaning and clueless friends named Mr. Maguire, played by Walter Brooke, traps Benjamin into this conversation:


Although the first synthetic plastics, such as Bakelite, appeared in the early 20th century, widespread use of plastics outside of the military did not occur until after World War II. ... plastics’ largest market is packaging, an application whose growth was accelerated by a global shift from reusable to single-use containers. As a result, the share of plastics in municipal solid waste (by mass) increased from less than 1% in 1960 to more than 10% by 2005 in middle- and high-income countries. ... By identifying and synthesizing dispersed data on production, use, and end-of-life management of polymer resins, synthetic fibers, and additives, we present the first global analysis of all mass-produced plastics ever manufactured.

They look at all the purposes for which plastic is used, and then the periods of time these products are in use, from short-term uses like packaging to long-term uses like construction. They write:

Global production of resins and fibers increased from 2 Mt in 1950 to 380 Mt in 2015, a compound annual growth rate (CAGR) of 8.4% (table S1), roughly 2.5 times the CAGR [compound annual growth rate] of the global gross domestic product during that period. The total amount of resins and fibers manufactured from 1950 through 2015 is 7800 Mt. Half of this—3900 Mt—was produced in just the past 13 years. Today, China alone accounts for 28% of global resin and 68% of global PP&A [polyester, polyamide, and acrylic] fiber production ...

We estimate that 2500 Mt of plastics—or 30% of all plastics ever produced—are currently in use. Between 1950 and 2015, cumulative waste generation of primary and secondary (recycled) plastic waste amounted to 6300 Mt. Of this, approximately 800 Mt (12%) of plastics have been incinerated and 600 Mt (9%) have been recycled, only 10% of which have been recycled more than once. Around 4900 Mt—60% of all plastics ever produced—were discarded and are accumulating in landfills or in the natural environment

Here's a figure showing some their estimates of plastic waste generation and disposal since 1950 and projected up through 2050. The calculations suggest that even with a substantial rise in incineration and recycling of plastic, the cumulative amount of plastic discarded will rise substantially in the next few decades, 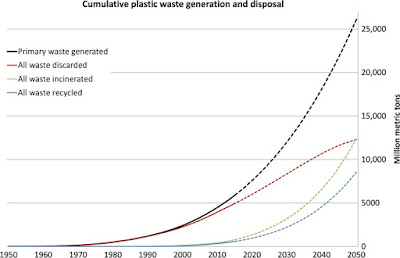 As the authors note, we are essentially carrying out an uncontrolled global experiment on how plastic waste may affect the environment:

Plastic waste is now so ubiquitous in the environment that it has been suggested as a geological indicator of the proposed Anthropocene era ... None of the mass-produced plastics biodegrade in any meaningful way; however, sunlight weakens the materials, causing fragmentation into particles known to reach millimeters or micrometers in size. Research into the environmental impacts of these “microplastics” in marine and freshwater environments has accelerated in recent years, but little is known about the impacts of plastic waste in land-based ecosystems. ...

The growth of plastics production in the past 65 years has substantially outpaced any other manufactured material. The same properties that make plastics so versatile in innumerable applications—durability and resistance to degradation—make these materials difficult or impossible for nature to assimilate. Thus, without a well-designed and tailor-made management strategy for end-of-life plastics, humans are conducting a singular uncontrolled experiment on a global scale, in which billions of metric tons of material will accumulate across all major terrestrial and aquatic ecosystems on the planet. The relative advantages and disadvantages of dematerialization, substitution, reuse, material recycling, waste-to-energy, and conversion technologies must be carefully considered to design the best solutions to the environmental challenges posed by the enormous and sustained global growth in plastics production and use.