Maybe instead of arguing over whether or how much to raise tax rates on those with high incomes, we could start by making more of an effort to enforce the actual existing tax laws? Natasha Sarin and Lawrence H. Summers explore what's possible in  "Shrinking the Tax Gap: Approaches and Revenue Potential" (Tax Notes, November 18, 2019).

In the lingo, the "tax gap" is the amount of tax that is owed under existing law, but that for one reason or another goes uncollected. Sarin and Summer estimate that "in 2020 the IRS will fail to collect more than $630 billion, or nearly 15 percent of total tax liabilities. ... Our estimates suggest that it’s reasonable to anticipate that with feasible changes in policy, the IRS could aspire to shrink the tax gap by around 15 percent." 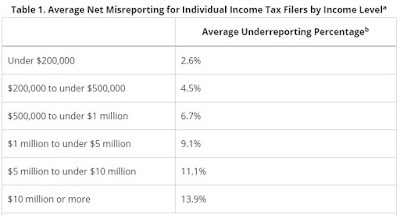 Sarin and Summers point out that IRS enforcement efforts have been declining. "[T]oday the IRS has fewer auditors than it had at any point since World War II. ... [S]ince 2011 the share of returns audited (across all filing categories) fell by 45 percent, and the additional taxes collected from audits fell by nearly 50 percent. The same is true for audits of high-income individual returns ... Audit rates for individuals making $1 million or more annually peaked in 2011 at 12.5 percent. Since then, they have fallen: In 2018 only 3.2 percent of returns of these high-income individuals were audited. Consequently, the additional revenue generated from examination of millionaires’ individual income tax filings declined by a similar amount (70 percent) over that period. These patterns suggest that it is unlikely that there would be diminishing returns to a substantial increase in IRS examination resources."

They suggest returning to the audit rates that were common all the way back in  2011, with a particular focus on those with more than $1 million in annual income and on corporations. The fact that the decline in audits has been tracked pretty much 1:1 with a corresponding fall in the taxes collected from audits strongly suggests that more audit would be matched with as similar rise in taxes collected.

Sarin and Summers note that the IRS not only underinvests in human auditors, but also in technology. "Indeed, in 2018 the IRS spent only $2.5 billion on IT investments. By comparison, Bank of America spent around $16 billion but serves only a quarter of Americans. ... By the end of 2017, nearly 60 percent of IRS hardware was past its useable life, and 26 percent of software was two or more releases behind the most up-to-date version. According to the GAO, the IRS Individual Master File and Business Master File systems date back to 1960 and are the two oldest IT systems in the federal government. The national taxpayer advocate has warned that outdated technology is a threat to the stability of the tax system: `By analogy, the IRS has erected a 50-story office building on top of a creaky, 60-year-old foundation, and it is adding a few more floors each year. There are inherent limitations on the functionality of a 60-year-old infrastructure, and at some point, the entire edifice is likely to collapse.”

They write: "Extrapolating from the CBO and Treasury data suggest that $1 of investment in the IRS leads to $11 of additional revenue ..." In other words, their proposed increase in IRS enforcement spending of about $10 billion per year would plausibly bring in about $100 billion per year.  As Sarin and Summers readily admit, their calculations about increase revenue should be regarded as rough and back-of-the-envelope approximations. But the totals also seem to me well within the plausible range. And again, this additional revenue isn't from changing any part of the US tax code, but just from enforcement of what is already written into law.
Posted by Timothy Taylor at 9:00 AM