The Return of the Patent Thicket

Back in the early 1970s, Xerox had figured out a strategy to block competitors in the photocopying business. It took out lots of patents, more than 1,000 of them, on every aspect of the photocopy machine. As old patents expired, new ones kicked in at a rate of several hundred new patents each year. Some of the patents were actually used by Xerox in producing the photocopy machine; some were not. There was no serious complaint about the validity of any individual patent. But taken as a whole, Xerox seemed to be using the patent system to lock up its monopoly position in perpetuity.  Under antitrust pressure from the Federal Trade Commission, Xerox in 1975 signed a consent decree which, along with a number of other steps, required  licensing its 1,700 photocopier patents to other firms.  (Here's a later retrospective on the case, including some of the other issues, the 1975 FTC consent decree, and what happened with follow-up litigation.)

The long-ago Xerox strategy for blocking competition has become known as the "patent thicket." Any patent blocks competition for a time, of course; the whole idea of a patent it to reward inventors with a temporary monopoly. But patent thicket arises when one or a few companies have a large cluster of closely related patents, which are continually expiring and being replaced in overlapping ways. Big companies cut deals with each other, so that they have access to each other's patents. Small But smaller entrepreneurs are shut out.

Ufuk Akcigit and Sina T. Ates offer some exploratory evidence that a modern version of the patent thicket may be at the root of some interlocking problems of the US economy in "What Happened to U.S. Business Dynamism?" (University of Chicago Becker Friedman Institute, working paper 2019-56, April 2019).

As a starting point, they show that the share of patents going to the top 1% of firm ranked by how many patents they already have is rising: "While in the early 1980s about 35 percent of patents were registered by the top 1 percent of firms sitting on the largest patent stocks, this ratio reached almost 50 percent in three decades.In addition, the share of patents registered by new entrants (firms that patent for the first time) exhibits the opposite trend: Notwithstanding the small pickup in the early 1980s, there has been a dramatic secular decline in the entrants’ share since then, with the ratio falling more than 50 percent in 25 years..." 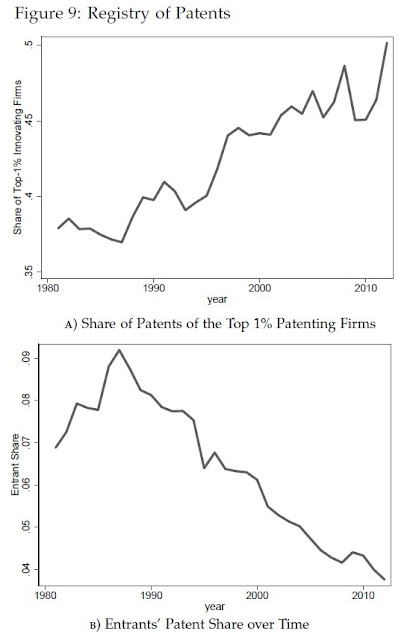 Next, look at who is buying and selling patents. They find "that while 30 percent of the transacted patents were reassigned to the firms with the largest patent stocks in the 1980s, the share went up to 55 percent by 2010. This drastic increase has crowded out small players in the market ... In the past two decades, the fraction of transacted patents that are reassigned to small firms has dropped dramatically from 75 percent to almost 50 percent, implying a shift of ownership from the hands of small firms to large ones." (For a discussion of how batches of patents are bought and sold, see Andrei Hagiu and David B. Yoffie. 2013. "The New Patent Intermediaries: Platforms, Defensive Aggregators, and Super-Aggregators." Journal of Economic Perspectives, 27 (1): 45-66.) 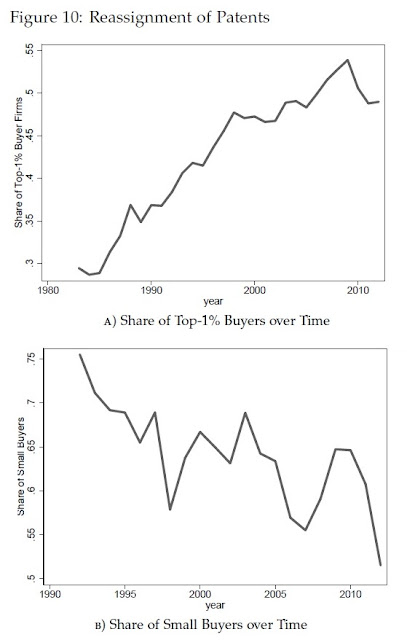 Is there some additional evidence to suggest that this greater concentration of patents among firms that already have the greatest share of patents is being used strategically to block competition, in true "patent thicket" style? They write:


In this part, we investigate whether firms produce strategic patents, which help the firm build thickets around its core business to ensure that technologies are not easily copied and challenged by others. ... If a firm’s aim is mostly protecting its core technology, the new internal patent will cite many patents from the firm’s existing portfolio. In contrast, if a firm’s aim is expanding into new fields, more citations will be made in that case to patents that are not in the firm’s portfolio. In this regard, the fraction of self-citations is informative about how internal a patent is and how likely it is that a patent serves to build a thicket. ... The striking observation is that while until 2000 patents were becoming more explorative in nature based on our earlier interpretation, this trend reverses completely around 2000, and patents become more exploitative and internal since then. 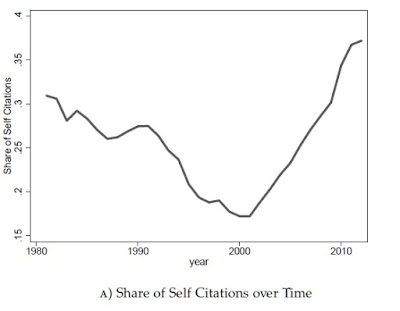 The main focus of the Akcigit and Ates paper is to present an economic model suggesting that many of the problems of the US economy can be explained by a fall in the diffusion of knowledge across firms--which is what one would expect if firms that already have the largest share of patents are steadily increasing their share. They write:


With knowledge diffusion slowing down, the direct effect is that market leaders are protected from being imitated. As a result, the technology gaps start widening, presenting market leaders a stronger market power. Market concentration and markups rise on average. Profit share of GDP increases, and labor share decreases. Larger gaps also discourage the followers, causing the productivity gap between them and the leaders to open up. The strengthening of leaders also discourages forward-looking entrants; hence, firm entry and the employment share of young firms go down. Discouraged followers and entrants exert smaller competitive pressure on market leaders; as a result, market leaders relax, and they experiment less. Hence, overall dynamism and experimentation decrease in the economy. To sum up, our quantitative investigation in this section underscores the importance of potential distortions in knowledge diffusion in explaining the declining U.S. business dynamism.

I've written from time to time about other pieces of evidence along these lines, like this study from the OECD which argues that the gap between market leaders and other firms is rising around the world; or this study from the US Bureau of Labor Statistics about how the productivity gap between firms is rising in US industries; or this description of how US antitrust authorities used to much more commonly order compulsory licensing of patents to improve competition; or this essay about how the greater separation between market-leading firms and the rest across many industries is driving inequality of wages. Thinking about how to facilitate a faster and broader dispersion of knowledge and productivity gains seems like a potentially important part of explaining the current economic picture and suggesting a policy agenda.
Posted by Timothy Taylor at 9:00 AM