Whose Charitable Giving (And for What Purposes) Gets a Tax Break?

When people who itemize deductions on their taxes donate to charity, they can take a tax deduction. When people who don't itemize deductions donate to charity, they don't get a tax deduction. Only about 11% of taxpayers itemize deductions, usually those with higher income levels. So the charitable priorities of this group gets a tax break, while others don't. Robert Bellafiore lays out these facts and offers some possible policy suggestions in "Reforming the Charitable Deduction," written for the Social Capital Project of the Joint Economic Commitee (SCP REPORT NO. 5-19, November 2019). Here are some background facts:

Overall charitable giving as a share of GDP (including both those who itemize deductions and those who don't) had a step-increase in the 1990s, and has stayed at that higher level since then.

However, the share of Americans giving to charity has been declining in the last couple of decades. The bright blue line shows the overall decline, while the rest of the lines show that the decline cuts across income groups. 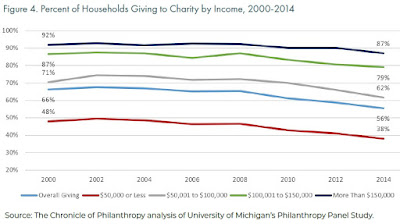 These patterns have a strong effect on what kind of charitable giving gets a tax break. The figure below shows the total amount given by those in four big income groups. For example, the total amount given by households with under $100,000 in income is considerably more than the total amount given by households with incomes of over $1 million. However, about two-thirds of the giving of those with under $100,000 goes to religious charities, while only about one-sixth of the giving  of those with over $1 million in income goes to religious charities. Those in the lower income group give much more to "helping meet basic needs," while the higher income group gives more to arts, education, and health care nonprofits. Because those in the $1 million and more income category are far more likely to itemize deductions, their charitable priorities get a tax break. 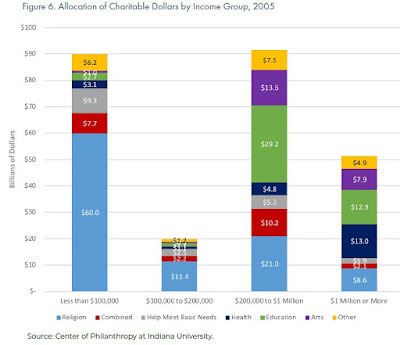 In addition, the share of charitable giving that comes from individuals has been gradually falling, while the share coming from foundations has been rising. 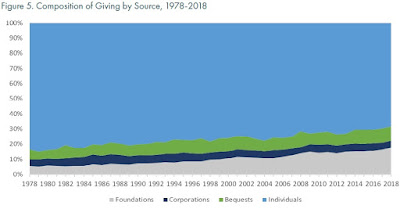 The report quotes a 2013 article in the Atlantic on the very largest individual gifts given by those with the highest incomes:


Of the 50 largest individual gifts to public charities in 2012, 34 went to educational institutions, the vast majority of them colleges and universities, like Harvard, Columbia, and Berkeley, that cater to the nation’s and the world’s elite. Museums and arts organizations such as the Metropolitan Museum of Art received nine of these major gifts, with the remaining donations spread among medical facilities and fashionable charities like the Central Park Conservancy. Not a single one of them went to a social-service organization or to a charity that principally serves the poor and the dispossessed. More gifts in this group went to elite prep schools (one, to the Hackley School in Tarrytown, New York) than to any of our nation’s largest social-service organizations, including United Way, the Salvation Army, and Feeding America (which got, among them, zero).

The tax deduction for charitable giving reduced federal tax revenues by $56 billion in 2018. Because more than 90% of those with over $200,000 in annual income itemize deductions, the overwhelming share of this tax break goes to those with higher income levels. 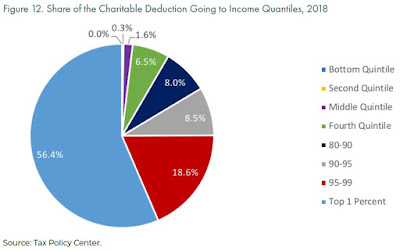 For example, one possible is to allow everyone to deduct their charitable contributions from their income before paying taxes, whether you itemize or not. Another option would be to create a tax credit, which might let everyone take 25% off their income taxes of any amount given to charity. Both of these proposals would expand the tax break for charitable giving, probably resulting in a reduction of $20-$30 billion per year in total federal tax revenues.  They would also probably increase the amount of charitable giving and perhaps also the share of people making charitable contributions.

The other way to go would be to reduce the existing tax break for charitable giving. For example, the Congressional Budget Office estimates revenue gains from two change to the charitable contributions deduction. One would allow donors to deduct only the amount that is greater than 2% of their adjusted gross income.  Another approach would require that only cash donations to charity would be eligible for a deduction. This change would be aimed at the common practice where someone owns an asset--say, a share of stock--which was bought for a lower price in the past, and then is donated to charity for its higher current value. If that asset first had to be sold and then converted into cash, capital gains taxes would need to be  paid before the charitable donation is made. CBO estimates that either change would increase revenue by about $15 billion per year in a few years.


I'm not wedded to any particular change, but a situation where the charitable giving of the top 1% gets a tax break for contributions that disproportionately goes to education, arts, and health institutions heavily used by that same 1% doesn't seem equitable.

For a brief history of the deduction for charitable contributions, see "The Charitable Contributions Deduction and Its Historical Evolution" (September 26, 2019).