The Story of Viner's Draftsman

The story of Viner's draftsman was fairly well-known to economists in the generation before me, and passed on by word-of-mouth to some of my generation, but my sense is that is barely known at all to more recent cohorts. For the sake of keeping the story alive, it goes like this:

Here's a figure from Viner's paper. There are series of U-shaped short-run cost curves. They are tangent to the long-run average cost curve, labeled with AC and a darker line in the figure. The idea is to show that the difference between the choices firms face in the short-run, when they are locked into a certain level of plant and equipment, and the choices available to firms in the long run as plant and equipment adjust. The downward slope of what is labelled as the AC curve in the figure shows economies of scale--that is, as the quantity produced by the firm expands (horizontal axis), and firms invest in large amounts of plant and equipment, the average cost of production (on the vertical axis) will decline. 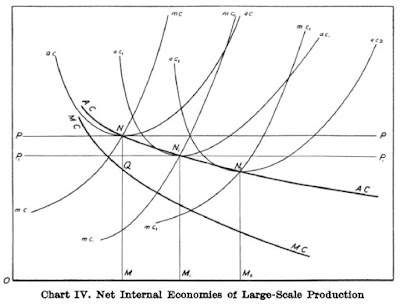 But there's a problem with the figure, which Viner discusses in a footnote. To understand the problem, 21st-century economists need to know that there was once a time before computerized graphics. In those long-ago days, researchers who wanted a graph turned to a skilled draftsman, who tried to combine instructions of the author with personal judgement and a French curve to produce the desired result.

Viner's draftsman was a mathematician named Y.K. Wong. Viner gave Wong the instructions to draw the figure show that the U-shaped short-run average curves should be tangent to the downward sloping long-run average cost curve (in the figure, AC). Moreover, Viner said that he wanted the point of tangency to happen at the bottom of each individual short-run AC curve.

These instructions were impossible for Wang to follow. For any U-shaped curve, the point at the bottom of the curve is tangent to a horizontal line. It's not geometrically possible for the point at the bottom of a U-shaped curve to be tangent to a downward-sloping line. However, Viner insisted that Wong draw the lines so that the very bottom of the U-shaped short-run average costs curves touched the long run AC curve.  This caused a problem, which Viner described in a footnote to his 1931 article (p. 36):


It may be noticed that at certain points the short-run ac curves are drawn so as to sink below the long-run AC curve. If the AC curve is interpreted as having significance only at the N points, this is of no consequence. But if the AC curve is interpreted as a continuous curve, this is an error. My instructions to the draftsman were to draw the AC curve so as never to be above any portion of any ac curve. He is a mathematician, however, not an economist, and he saw some mathematical objection to this procedure which I could not succeed in understanding. I could not persuade him to disregard his scruples as a craftsman and to follow my instructions, absurd though they might be.

Paul Samuelson adds a grace note to this story in his essay, "Schumpeter as an Economic Theorist" (reprinted in Paul Samuelson on the History of Economic Analysis: Selected Essays, edited by Steven G. Medema, Anthony M. C. Waterman, 2015):

I may retell the story that, as late as 1935, Viner insisted to his Chicago class: ‘Although Wong is mathematically right, I can draw the envelope curve through the bottoms of the U’s.’ My cheeky rebuke as a nineteen year old was, ‘Yes Professor Viner, you can, with a thick pencil!’ As a twenty-five year old, I realized that I might better have added: ‘Or, of course, if your U-shaped short-run curves are V-shaped, with cornered minima, and provided the economies of plant enlargement aren’t too rapid.’

There are both economic and cultural lessons here. A subtle economic lesson is about what kinds of cost efficiency are possible in the short-run and the long-run, and I'll leave that lesson for the classroom. A broader economic lesson is how expositions that use algebraic or graphical mathematics can force you to sharpen your insights. A cultural lesson for economists is that when someone with another area of expertise tells you that your insight is impossible, even when that person knows no economics at all, perhaps you should pay attention.
Posted by Timothy Taylor at 9:00 AM