"[W]e conclude that the Bureau of Labor Statistics’ (BLS) CPI Prescription Drug Index (CPI-Rx) is the best available summary measure of the price changes of prescription drugs. According to this measure, not only are drug prices increasing more slowly than general price inflation; in the most recent period, drug prices have been decreasing. From the peak in June 2018 through August 2019, the CPI-Rx has declined by 1.9 percent. Figure 1 plots the year-over-year percentage change in the CPI-Rx. Through August 2019, the year-over-year change in the index has now been negative for 8 of the previous 9 months."

As a starter, here's the Consumer Price Index for Prescription Drugs as calculated by the US Bureau of Labor Statistics: 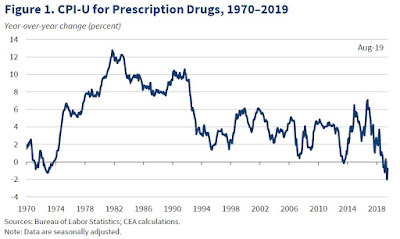 A price index is of course an average over all prices. In addition, it's a weighted average, where those items on which many people spend a lot get more weight than those items where only a few people spend.

In addition, prescription drugs often have both a "list price" and an actual "transaction price," which results from a negotiation between drug manufacturers, health insurance companies, pharmaceutical benefit managers, as well as in some cases direct rebates to consumers. The BLS price index is based on the transaction price, not the list price. As the CEA report notes: "Express Scripts, one of the largest pharmacy benefit managers, reported that even though list prices increased in 2018, the prices paid by their clients fell. Some drug companies have themselves warned investors that increased discounts and rebates would offset any list price increases and that net prices would either be flat or fall in 2019 ..."

In addition, there is reason to believe that the prescription drug price index calculated by the BLS overstates the actual rise in prices because of a standard problem sometimes called the "quality" or "new goods" bias. Say that an old drug is replaced by a new drug, which works better and has fewer side effects, but sells for the same price. In this hypothetical, you are getting more for your money with the new drug; in fact, even if you paid a little more for the new drug, you might be better off. But while a perfect price index would presumably hold constant the quality and variety of drugs available, the practical reals-world price index doesn't do this, and for that reason will tend to estimate a higher rise in prices.

Of course, the CPI measure of changes in prescription drug prices has practical problems, as do all price indexes. It's based on a sample of prescription drugs, not all of them, and less-prescribed drugs are more likely to be left out. It is based retail prescription drugs, and so it doesn't include prices for hospital- and doctor-administered drugs. Figuring out transaction prices and gathering information on rebates to consumers is imperfect. If you personally need a certain drug, where they aren't good substitutes, and the price of that drug goes up, it's perhaps not very comforting to read about what is happening with an overall price index of drugs that includes all the ones you are not taking.

But if our society is going to address issues like the out-of-pocket cost of many prescription drugs, it's important to see the overall issue clearly. And the overall evidence is that the price index for prescription drugs has fallen in the last year or so.
Posted by Timothy Taylor at 1:10 PM