The "Millennials" are commonly defined as the generation that grew up and came of age in the opening decades of the 21st century: that is, those born from approximately 1981 to 1996.
Every generation finds itself caught in the twists and pressures of a different set of social and economic challenges, and the Millennials are no exception. For example, those who were struggling to enter the labor market as young adults during the Great Recession of 2007-2009 and the sluggish recovery in its aftermath were Millennials. Those who were trying to buy houses and and attend college in the 2000s, after the prices of those goods had been climbing in recent decades, were Millennials. Some long-run trends, like diminished labor market opportunities for low-skilled workers, continued for Millennials as well.

The most recent issue of Pathways magazine from the Stanford Center on Poverty and Inequality has a collection of short fact-based essays about Millenials, who are now adults in the age bracket from 23 to 38. Here are a few findings that jumped out at me.

It's perhaps no surprise that Millennials are more likely to identify as multiracial or to adopt unconventional gender identities. However, according to Sasha Shen Johfre and Aliya Saperstein,  "they are not outpacing previous generations in rejecting race and gender stereotypes. Their attitudes toward women’s roles and perceptions of black Americans are quite similar to those of baby boomers or Gen Xers." 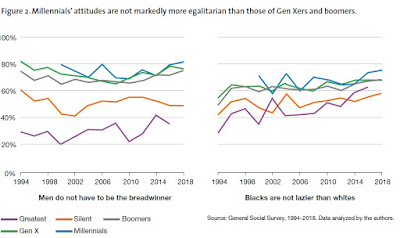 Labor force activity has declined for all prime-age workers, but the decline among young workers has been especially rapid. This means that millennials. who are currently 25–34 years old are working less than Gen Xers at the same age. Declines are most evident among men, though women’s labor force activity is also lower. Large gaps by education remain, with the highest labor force participation among college graduates.

Florencia Torche and Amy L. Johnson write: "The payoff to a college degree—in terms of earnings and full-time work—is as high for millennials as it’s ever been. But there is a substantial earnings gap between those who are and aren’t college educated. Millennials with no more than a high school diploma have much lower earnings in early adulthood than prior generations."

Michael Hout writes: "American men and women born since 1980—the millennials—have been less upwardly mobile than previous generations of Americans. The growth of white-collar and professional employment resulted in relatively high occupational status for the parents of millennials. Because that transition raised parents’ status, it set a higher target for millennials to hit." As Hout points out, a trend toward less social mobility was already apparent for those born in the 1960s and 1970s, but it has become stronger since then. 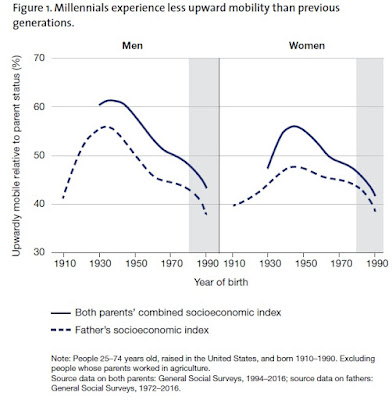 
Over the last several decades, more students have taken on debt to pay for school, and the size of their debt has grown. According to the National Center for Education Statistics, 46 percent of students enrolled in all degree-granting schools had student loans in 2016, a percentage that pertains to the tail end of the millennial generation. This is up from 40 percent in 2000, when Generation X represented much of the college population. Over the same period, the average loan amount increased by nearly $2,000, from $5,300 in 2000 to $7,200 in 2016. ... As shown in Figure 1, the default rate has increased among all types of borrowers, although the increase is far less pronounced among borrowers for selective schools and graduate schools.2 The simple conclusion: Relative to Generation
X, millennials indeed took out more student loans, took out larger student loans, and defaulted more frequently. 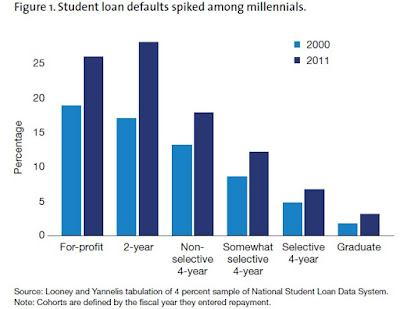 Darrick Hamilton and Christopher Famighetti discuss housing: "Young millennials have lower rates of homeownership than Generation X, baby boomers, and the Silent Generation at comparable ages. We have to reach back to a generation born nearly a century ago—the Greatest Generation—to find homeownership rates lower than those found today among millennials. The racial gap in young-adult homeownership is larger for millennials than for any generation in the past century. Although the housing reforms after the civil rights era reduced the racial homeownership gap, all those gains have now been lost."


Bruce Western and Jessica Simes point out: "The recent reversal in overall incarceration rates takes the form of an especially prominent decline in rates of imprisonment for black millennial men in their late 20s. The decline is far less dramatic for other population groups—such as white and Hispanic men—that never experienced the extremely high rates that black men experienced. The imprisonment rate for black millennial men—approximately 4.7 percent—nonetheless remains extremely high."