For some decades now, it has been widely accepted that it is appropriate to make some adjustments to this outcome. The general sense is that if two districts impose the same level of tax effort, as measured by the tax rate, then the per student funding in those districts should also be the same. In that spirit, many states now provide the same basic per-student funding for all schools, which involves some redistribution away from school districts with higher property values and higher incomes to others. Yes, school funding inequalities persist, as parents in higher-income districts find ways to offer additional support to schools, either by imposing higher property taxes on themselves or through other methods.  But the inequality that would have existed if every school district was funded only by local tax revenues from that district is diminished.

A similar argument applies at the level of states and the federal government. Joshua T. McCabe makes the case in "Rich State, Poor State: The Case For Reforming Federal Grants"  (Niskanen Center, December 2019). 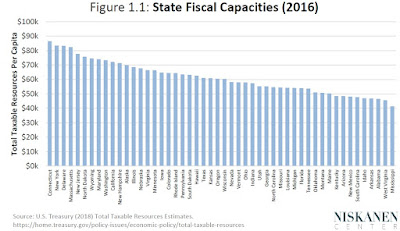 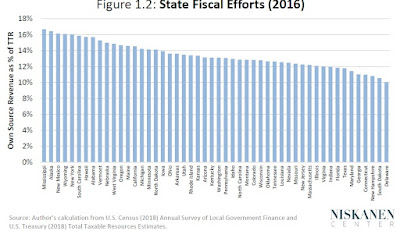 The US economy has been experiencing a rising level of regional disparities. Moreover, governments of other countries do considerably more than the US. to equalize revenues across state- or provincial-level government. McCabe writes:

Political scientist Jonathan Rodden has done the most comprehensive analysis of fiscal federalism around the world. In contrast to the rhetoric of pundits who claim there is a massive redistribution from rich (often blue) to poor (often red) states, Rodden finds that the U.S is the worst among rich democracies in terms of progressively allocating more federal grant funding to states with limited fiscal capacity.

What might such changes look like in a US context? McCabe points out that for some major federal programs, the federal government makes little nor no effort to help states with lower Total Taxable Resources. For example, here's federal Medicaid funding to states on a per-capita basis: notice that there is no particular pattern where states with less per capita Total Taxable Revenue get more federal Medicaid support. 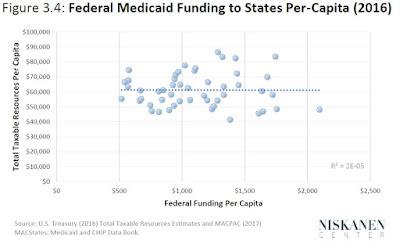 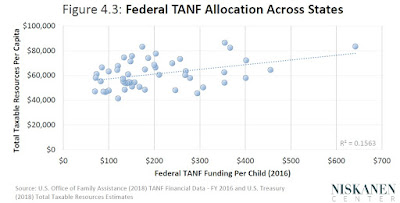 The politics of this proposal are interesting to contemplate. For example, it's common to note that lower-income Republican-leaning states often have been hesitant to expand Medicaid, as they are allowed to do under the 2010 Patient Protection and Affordable Care Act. McCabe agrees that Republican intransigence toward the proposal is part of the issue, but also points out that lower-income states with lower levels of Total Taxable Revenue have been hesitant to commit to making matching-grant payments for Medicaid for several decades now.

Those who would like redistribution programs like Medicaid and TANF which have shared federal-state funding to become more popular might do well to consider the possibility that if they were designed to be friendlier to states with low levels of Total Taxable Revenue, they might spread more easily.
Posted by Timothy Taylor at 12:16 PM