With the Rise of Index Funds, Who Watches the Companies?

A standard argument for the social usefulness of the stock market is that shareholders have an incentive to monitor and to scrutinize the companies in which they have invested. When this incentive is combined with requirements for firms to disclose information, to be audited, and to answer questions from shareholders--along with the ultimate power of shareholders to replace top executives--publicly-owned corporations must live an examined life. One can have honest arguments over how well this shareholder monitoring works. But the rise of index funds is a direct challenge to these arguments.

Index funds, for the uninitiated, seek only to mirror the performance of the overall stock market (as measured, for example, by an index like the S&P 500 or the Russell 3000). Three big companies dominate the market for index funds: Vanguard, Black Rock, and State Street Global Advisors (commonly called SSGA). An index fund is a passive investor, and it can be set up as an automated investor. Indeed, one main reason why an index fund can charge such low fees is that it does very little monitoring of companies, because it doesn't pick and choose between companies.

The combination of very low fees and a return which matches the overall stock market can be an excellent deal for everyday investor deciding on how to invest money in their retirement account, like me. Indeed, the legendary investor Warren Buffett has recommended low-cost index funds to everyday investors, and in his will instructs that his legacy to his wife be managed as a low-cost index fund. John Bogle, who created the first prominent index fund at Vanguard, became a folk hero to many investors.  But while investors have been moving in the direction of index funds, the issue of what happens to a stock market with substantially less monitoring has received less attention.

Lucian Bebchuk and Scott Hirsi have been writing a series of essays on this topic. In "The Specter of the Giant Three," published earlier this year in the  Boston University Law Review (2019, 99:3, pp. 721-742), they lay out some facts and estimates about the growth of the Big Three. They write:


This Article analyzes the steady rise of the “Big Three” index fund managers—Blackrock, Vanguard, and State Street Global Advisors (“SSGA”). Based our analysis of recent trends, we conclude that the Big Three will likely continue to grow into a “Giant Three,” and that the Giant Three will likely come to dominate voting in public companies. ...
Assuming that past trends continue, we estimate that the share of votes that the Big Three would cast at S&P 500 companies could well reach about 34% of votes in the next decade, and about 41% of votes in two decades. Thus, if recent trends continue, the Big Three could be expected to become the “Giant Three.” In this Giant Three scenario, three investment managers would largely dominate shareholder voting in practically all significant U.S. companies that do not have a controlling shareholder. 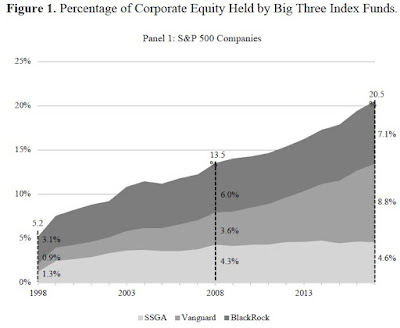 What are the possible risks? Bebchuk and Hirst address the question in "Index Funds and the Future of Corporate Governance: Theory, Evidence, and Policy." The paper is forthcoming in the Columbia Law Review in December 2019, but what looks like a final version is also available as a working paper from the European Corporate Governance Institute. As they note early in this essay, the analytical framework for this paper is based on an essay by Bebchuk, Hirst, and Alma Cohen, "The Agency Problems of Institutional Investors," which appeared in the Summer 2017 issue of the Journal of Economic Perspectives.

Here's a taste of the Bebchuk and Hirst argument:

[I]ndex fund investors could benefit if index fund managers communicated with the boards of underperforming companies about replacing or adding certain directors. However, our examination of director nominations and Schedule 13D filings over the past decade indicates that the Big Three have refrained from such communications. ...

Index fund investors would benefit from involvement by index fund managers in corporate governance reforms—such as supporting desirable proposed changes and opposing undesirable changes—that could materially affect the value of many portfolio companies. ...  We find that the Big Three have contributed very few such comments and no amicus briefs during the periods we examine, and were much less involved in such reforms than asset owners with much smaller portfolios. ...

Legal rules encourage institutional investors with “skin in the game” to take on lead plaintiff positions in securities class actions; this serves the interests of their investors by monitoring class counsel, settlement agreements and recoveries, and the terms of governance reforms incorporated in such settlements. ... Although the Big Three’s investors often have significant skin in the game, we find that the Big Three refrained from taking on lead plaintiff positions in any of these cases.


Interestingly, Bebchuk and Hirst do not find evidence in support of one concern sometimes raised: that because the big index funds want  high returns for investors, they will tend to favor less competition between firms as a way of generating higher profits for firms. The authors clearly believe that a reduction in firm monitoring by the growing Big Three index funds poses real problems, but this doesn't seem to be one of them.

In response to the growth of the Big Three index funds, Bebchuk and Hirst have some concrete suggestions. Various changes in accounting and other rules might encourage the index firms to spend more on interacting with companies in their portfolio. There are concerns that some index companies may have a conflict of interest: if an index company also runs the retirement fund for a given company, it may become reluctant to chastise management of that company. Such conflicts could be prohibited. There is also an issue that under Section 13(d) of the Securities and Exchange Act, an investor who holds more than 5% of a company's stock with the purpose of influencing control of the company faces a number of additional disclosure rules, and so the Big Three index funds demonstrate their lack of interest in influencing control by remaining largely uninvolved with specific companies.

These kinds of issue are likely to heat up in the next decade or two, as the share of stock markets held by the Big Three index funds continues to rise. In my own mind, I sometimes separate those corporate governance issues related to the strategy and leadership of a single company from those more general issues that may affect a broad range of companies. The Big Three index finds are in an interesting and potentially powerful position to take stances on that second group of more general issues.
Posted by Timothy Taylor at 11:52 AM