About 80% of all the commercially produced processed pumpkin in the US happens within a 90-mile radius of Peoria, Illinois.  About half of all US mushroom production happens in Chester County in southeastern Pennsylvania. And as I recently learned, about 95 percent of the commercially produced ginseng in the United States comes from Marathon County, which is a few hours drive north of Madison, Wisconsin.

I ran across this fact as a throwaway line in a National Geographic article, "Demand for ginseng is creating a ‘wild west’ in Appalachia: With poachers cashing in on the Chinese appetite for American ginseng, growers are arming up" (by Rene  Ebersole, January 2020). As the title implies, the focus of the article is on those who hunt in forests for ginseng roots and sell them to dealers. Some of this hunting happens on public lands, but the price has risen enough that some owners of private forest-land have started seeding their woods to grow "wild-simulated" ginseng, which attracts ginseng poachers. Of course, the National Geographic article is laced with fun history and facts. Ebersole writes:


Asian ginseng has been consumed in the Far East since ancient times. It became scarce there as far back as a thousand years ago, spurring a cultivation industry in China, Korea, and Japan. After wild American ginseng was discovered near Montreal in the 1700s by a French Jesuit priest, Canada began exporting it to China. Within decades, the plant became scarce in Canada, and traders looked to the United States for other sources of wild ginseng. They gravitated to Appalachia, where the Cherokee were using the root as a tonic for colic, colds, and other ailments. The legendary frontiersman Daniel Boone made much of his fortune from the ginseng trade in the late 1780s, hiring sang collectors, or “sangers,” to mine for golden root and shipping barge loads to a market in Philadelphia.

During the late 1800s, as prices for wild ginseng soared and supplies diminished, Wisconsin farmers began cultivating it in fields. Farmed ginseng has a smooth, parsnip-like appearance and is considered far less potent than its wild counterpart. Wisconsin’s ginseng board reports that one county in the state now exports more than a million pounds of the cultivated root each year—95 percent of U.S. production. Used in commercial goods, from face and body products to sports drinks and even cigarettes, cultivated ginseng sells for about $250 a pound in Asia, according to the latest market analysis by the International Ginseng Institute in Murfreesboro, Tennessee. More than 45 percent of wild American ginseng, gnarly and twisted from growing between rocks and thick tree roots, goes to Hong Kong, where the roots are sorted, graded, and shipped to China or other parts of Asia, retailing for an average of $8,000 a pound. Only connoisseurs can tell the difference between wild ginseng and the [wild-simulated] ginseng that farmers such as Harding produce.

While the National Geographic article focuses on giving a blow-by-blow account of conflict over wild and wild-simulated ginseng in Appalachia, I wanted to know more about the concentration cultivated ginseng market in Marathon County. At the website of the Marathon County Historical Society, Ben Clark offers a capsule portrait of "Wausau's Ginseng King," John H. Koehler, who gets a lot of the credit for learning how to cultivate ginseng (September 14, 2018). Clark writes:


The valuable ginseng root had been gathered from the [Wisconsin] woods where it grew wild for generations, and there had long been interest in growing it on farm. After a number of disastrous attempts to transplant the crop onto a farm in the 1870s, almost everyone had come to believe it was simply impossible to grow ginseng outside its natural environment or in larger quantities.

But in the 1890s, advances that led to ginseng being cultivated in small batches out East, and when Koehler heard about a successful farm in Missouri, he decided to try ginseng farming for himself. He resigned his position [as a land agent] and convinced his family to let him try raising some of the crop on the farm. In those early years Koehler was derided as crazy and he was close to financial ruin before he found success.

And find success as a ginseng farmer he did. In 1901, Koehler established the Wisconsin Ginseng Garden, the first of its kind in Marathon County. While his first garden was modest, it proved he could successfully grow ginsing, and he would go on to found the larger Wausau Ginseng Company in 1908 and the Badger Ginseng Gardens in 1910.
Because the ginseng farm was a very new thing, and because of the many difficulties in growing ginseng, Koehler recognized that the would-be ginseng farmers needed to work together. He was a founding member of both the Wisconsin and American Ginseng Growers Associations. These associations helped farmers compare experiences to learn what worked and what did not when figuring out how to grow ginseng, as well as functioning as a cooperative to provide resources for farmers to market and sell their crops in international markets.

Koehler became such an expert in the field of ginseng farming, that he literally wrote the book on how to do it. In 1912, he published the Ginseng and Goldenseal Growers’ Handbook. The book outlined everything a potential ginseng farmer needed to know about the crop, from the basic history and uses to detailed steps that took the process from planting seeds to shipping the cleaned and dry roots to market.

Here's a picture of Koehler at his Badger Ginseng Garden circa 1910: 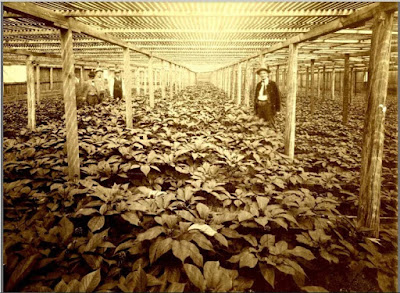 For economists and entrepreneurs, this history strikes a number of resonant themes. It illustrates the importance of international demand, not just now but for several centuries. Indeed, international demand can even lead to almost wiping out a product in a certain area, like wild ginseng in 18th century Canada (or the buffalo in the 19th century United States). New technologies, like how to cultivate ginseng, often flourish with a cluster of producers in a certain area. As the producers share ideas and knowledge, they also create a local workforce with special skills, as well as often sharing connections to transportation and customers. I've read that there are ginseng farms in northern Wisconsin where phone calls are answered with a greeting in Mandarin.

Wisconsin ginseng also illustrates how small industries and producers can get caught in the gears of larger trade conflicts. The Winconsin producers have for a long time relied on China's market. In an article written for the Wisconsin Ginseng Board, Naomi Xu Elegant describes how "Wisconsin Ginseng Farmers Had Been Exporting to China for a Century. ThenCame the Trade War" (August 31, 2019). She writes:


The first ever trade ship from the U.S. to China, in 1784, set sail with 30 tons of ginseng in its cargo—a strategic decision by the U.S., which needed new markets and knew there was high demand for ginseng in China. The Revolutionary War had only just ended and Britain had placed a trade blockade on the U.S. American ginseng became favored in China for its yin, or "cooling" effects, while Asian ginseng, the species indigenous to China, is thought to have yang, or "heaty" effects, meaning the two are complementary.

Chinese demand for American ginseng was so high that the U.S. had to switch from wild harvests to farm cultivation of the slow-growing root in the late nineteenth century. ...

U.S. exports of ginseng account for less than 10% of the global supply, according to the Ginseng Board of Wisconsin. Canada produces three times as much and charges a lower price, but Wisconsin-grown ginseng is considered a luxury product, coveted by consumers for its superior taste and quality, thanks to the area's "ideal growing conditions." ...

The [Wisconsin ginseng] farmers send about 65% of their crop to mainland China and another 20% to Hong Kong, a major trading point for mainland distributors, meaning Chinese consumers effectively set the market. As a new harvest season looms, almost half of last year's Wisconsin ginseng crop remains unsold. In 2018, the previous year's supply sold out by March. ...

Wisconsin's small market share means the farmers have little leverage in negotiations with their Chinese buyers, who want them to absorb the cost of the tariffs. A 2018 news release from the Ginseng Board of Wisconsin said that "many Chinese distributors have expressed concern that they may have to shift purchases to Canadian ginseng." Another side effect of the trade war is that direct sales of ginseng to Chinese customers visiting the U.S. have stalled over fears that customs officers will confiscate or tax travelers' purchases when they return to China.

One a location has established a strong presence--in ginseng, pumpkin, mushrooms, or other products--that expertise and economic strength can be persistent. But if the market conditions for that product are severely disrupted, and it loses that strong presence, the loss of economic strength can be persistent, too.
Posted by Timothy Taylor at 9:29 AM