Does the Fed Have Ammunition to Fight the Next Recession?

Ben S. Bernanke delivered his Presidential Address to the American Economic Association last weekend on the topic, "The New Tools of Monetary Policy" (January 4, 2020, here's a weblink to watch the lecture, and here's a written-out version of the paper on which the lecture was based). To set the stage, he started the talk with a figure similar to this one showing the "federal funds" interest rate--the key interest rate on which Fed policy focuses. 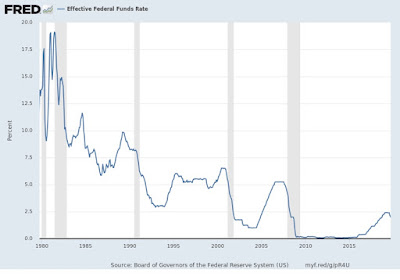 Bernanke makes a case that the Fed will be able to compensate with a combination of two nontraditional monetary policies: quantitative easing and forward guidance. "Quantitative easing" is also commonly called "large-scale asset purchases." For example, the Fed purchased US government bonds and also mortgage-backed securities from banks. From 2009-2014, Bernanke reports: "Total net asset purchases by that point were about $3.8 trillion, approximately 22 percent of 2014 GDP." Banks hold reserves at the Fed, and so the Fed paid for these purchases by crediting the banks with a correspondingly higher level of reserves--which the banks could then lend out if they wished.

"Forward guidance" refers to an announcement that the central bank intends to continue a certain policy into the future. For example, consider the situation circa 2010, when the federal funds interest rate had already fallen to near-zero and large-scale asset purchases were underway. Financial markets are always looking to the future, and so a natural concern would be whether these policies were likely to be reversed. When a central bank promises that certain policies will be sustained for a certain amount of time, or until certain economic objectives are achieved, it should dramatically reduce any concerns over a near-term policy reversal.

Bernanke argues that in a US context, the combination of large-scale asset purchases and forward guidance can have an economic effect similar to cutting the federal funds rate by about 3 percentage points. Thus, when (not if) the next recession hits, a combination of these tools and cutting the federal funds rate back to a near-zero rate should provide a sufficient stimulus--but just barely.

However, estimating the effect of policies like quantitative easing and forward guidance is an inexact science. As Bernanke writes: "[T]he uncertainty surrounding the reported estimates is high. Reasonable people can disagree about the precise effects of asset purchases on financial conditions, the credibility of forward guidance, or the effects of changes in financial conditions on growth and inflation."

Kenneth Kuttner reviewed the US evidence in the Fall 2018 issue of the Journal of Economic Perspectives, and argued that the Fed's previous round of quantitative easing had a similar effect to reducing interest rates by 1.5% ("Outside the Box: Unconventional Monetary Policy in the Great Recession and Beyond," 32:4, 121-46). But when the Federal Reserve started using such policies starting in 2008, no one could be sure how they would work or how long they would last.  If such policies were implemented again, one can make a case that their effects would be greater (because the policies would be better-coordinated and understood) or smaller (because they would no longer have the shock value of being new and different).

What if the Fed were to find that quantitative easing and forward guidance were not enough to boost the US economy in a recession? There are basically three other sets of options that Bernanke mentions.

First, central banks in other countries have experimented with other types of monetary policy tools.
For example, central banks in other countries didn't just purchase government debt and government-backed debt (like US mortgage backed securities), but also in some cases bought corporate debt, commercial paper, corporate stocks, and shares in real estate investment trusts. But Bernanke notes:
"Other than GSE-backed mortgages, the Fed does not have the authority to buy private assets, except under limited emergency conditions, and—in light of the political risks and philosophical objections by some FOMC participants—seems unlikely to request the authority."

The Bank of England and the European Central Bank have in some cases offered direct loans to the private sector, rather than working though banks. Bernanke reports that the Fed considered this option, but decided that in the context of the US economy, borrowers had reasonable access to credit through bank loans and corporate bond markets, and so the Fed did not go down this road. But he adds: " Still, one can imagine circumstances—for example, if constraints on bank lending are interfering with the transmission of monetary policy—in which this option might resurface in the United States."

A number of other countries have pushed their policy interest rate into negative territory. Bernanke comments: "Federal Reserve officials believe that they have the authority to impose negative short-term rates (by charging a fee on bank reserves) but have shown little appetite for negative rates

thus far because of the practical limits on how negative rates can go and because of possible financial side effects. That said, categorically ruling out negative rates is probably unwise, as future situations in which the extra policy space provided by negative rates could be useful are certainly possible." In addition, other countries have pushed the policy  interest rate into slightly negative territory, but by much less than 1 percent.

Thus, Bernanke suggests that to address concerns about whether monetary policy will have enough ammunition to address the next recession, a reasonable step would be to rely more on fiscal policy. In particular, budget rules could be written so that when unemployment (or some other signal of recession) rises by a certain amount, it triggers an automatic and immediate payment to US citizens--a payment that could be repeated a year later if still needed. Such immediate payments could then complement monetary policy in warding off the worst effects when (not if) the next recession arrives. For a discussion of such policies, see "Strengthening Automatic Stabilizers" (May 21, 2019).

For those interested in the experience of other countries in using unconventional monetary policy tools (including negative interest rates and direct central bank loans as well as large-scale asset purchases), here are a couple of useful overviews.

Posted by Timothy Taylor at 3:03 PM