Worries about Automation and Manufacturing Job Loss from 1940

Concern over how robots and automation can lead to loss of jobs are not new. For example, here's a cartoon used to illustrate a New York Times article by Louis Stark back in 1940. 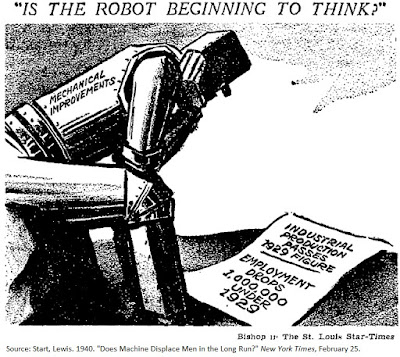 Stark's article was called "Does Machine Displace Men in the Long Run? New Studies Cited as Old Argument is Renewed over Significance of Technological Unemployment" (February 25, 1940). Here are a few thoughts stimulated by the article.

1) It's interesting to note that 80 years ago, the controversy about how thinking robots as show in the cartoon might lead to long-term job loss was described in the headline as an "old argument."

2) The article describes studies about jobs lost to automation in the preceding decades. Here's one example from Stark:


The cigar industry is a striking example of mechanization on productivity and employment, for the four-operator cigar machine reduced the amount of labor by 62 per cent as compared with the hand process. In terms of production costs, the reduction in labor time represented a difference in favor of the machine process of at least $3 per thousand of cigars. In 1921 the industry employed 112,000 wage earners ... By 1935 it was estimated that 44,000 hand workers had been severed from the industry due to use of the long-filler cigar machines alone and that concurrently jobs had been provided on the machine for 17,000 new workers, mostly unskilled.

3) These shifts were widespread enough that article quotes someone named Corrington Gill. an assistant at the Works Project Administration, to the effect that "there is little likelihood that more jobs will be available in manufacturing unless there was a substantial gain in production or a further decrease in working hours. Stark added: "Therefore, he [Gill] felt, manufacturing industries were unlikely to serve as a reservoir of jobs for the growing labor supply."

In the short-term, Gill was incorrect, because wartime production boosted the number of manufacturing jobs substantially. But in the long run, he was more correct than perhaps he could have imagined. The blue line in the figure shows the total number of US manufacturing jobs since 1940. The red line shows total US employment. In short, Covington Gill was quite correct in his supposition back in 1940 that manufacturing jobs were not going to absorb future growth of the labor supply over time. 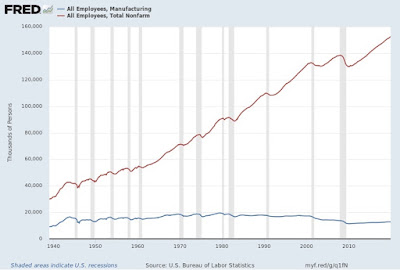 4) The preceding figure is perhaps unfair. The scale needed on the vertical axis to show total jobs over time tends to minimize the rise and fall of manufacturing jobs more specifically. Here's a figure just showing total manufacturing jobs. 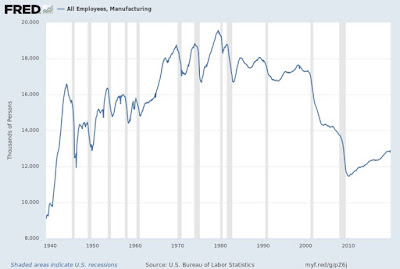 You can see the sharp rise in manufacturing jobs during World War II, and some additional rise in the 1960s and 1970s. But in a big picture sense, the total number of manufacturing jobs doesn't change much from the 1950s up through about 2000, despite all the other dramatic shifts in the US economy during those five decades.

The recent sharp drop in US manufacturing jobs starting around 2000 is also more visible in this figure, which result from a hard-to-decompose mixture of technology and trade, varying across industry. In addition, many US manufacturing firms have an increasing share of non-manufacturing employment. For a more detailed discussion of these shifts, one useful starting point is Teresa C. Fort, Justin R. Pierce, and Peter K. Schott. 2018. "New Perspectives on the Decline of US Manufacturing Employment." Journal of Economic Perspectives, 32 (2): 47-72.

5) At the end of Stark's article, he discusses the short-run stresses of long-run changes: "Those who maintain that there is a real `technological unemployment' may agree that there is re-employment `in the long run,' but that the displaced wage-earners must eat and care for their families `in the short run.'" Writing in 1940, Stark describes a list of policies aimed at smoothing the transition:

Suggested remedies revolve around the problem of how to provide steady income for displaced wage-earners, rather than steady work. Among these proposed remedies are unemployment insurance, old-age pensions, public works programs, minimum-wage and maximum-hour laws, dismissal compensation and proper timing of technological improvements. A number of these are already in effect.

My sense is that no plausible safety net will eliminate the trauma of how technological change can affect workers, jobs, and labor markets.  On the other side, technological change is also what makes leads to higher wages, new products, and a higher standard of living. We are further along in trying to spread the benefits and cushion the costs of technological change in 2020 than in 1940, but we remain bedeviled by the same basic trade-offs.