The Inflation Puzzle: Why Has it Moved So Little for 25 Years?

Sometimes the mystery is why something did not happen. The classic statement of this description is in the Arthur Conan Doyle story "Silver Blaze," in which Inspector Gregory asks Sherlock Holmes:

When it comes to the US inflation rate, the mystery is that it has moved so little for the last 25 years. The blue line shows the US inflation rate as measured by the Personal Consumption Expenditure price index, leaving out energy and food prices on the ground that they can add short-term volatility that obscures the underlying pattern. If this seems like an odd measure of price inflation--perhaps because the Consumer Price Index is a better-known measure of inflation--I'll just say that it's measure on which the Federal Reserve focuses (for reasons explained here). The red line shows the unemployment rate. 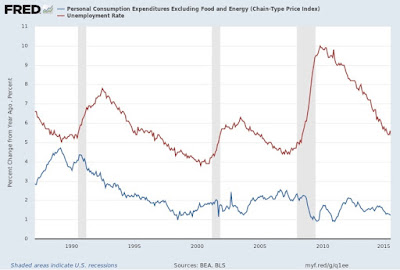 Back in the late 1980s and early 1990s, the inflation rate reached the range of 4-5%. There was a recession (shaded bar) in 1990-91, and you can see the unemployment rate rise while the inflation rate falls. This pattern is standard intro econ wisdom, going under the name of the "Phillips curve:" a tradeoff is expected, at least over the short-run of a few years, because a slowed down recessionary economy will tend to have more unemployment but less inflationary pressure, while an economy in an upswing of economic growth will tend to have lower unemployment but greater inflationary pressures.

For a readable quick overview of the issues, the Hutchins Center at Brookings has published "What’s (Not) Up With Inflation? (January 2020). The report starts with a short essay by Janet Yellen laying out the issues, and then is followed with an essay by Sage Belz and David Wessel listing possible explanations why inflation has seemed stuck in place (with references and links to recent supporting literature). Here are some possibilities for why inflation is stuck:

Inflation expectations. "Professional forecasters and financial market analysts today generally believe price inflation will run at the Fed’s 2 percent target over the medium run. As a result, businesses may not respond as much as in the past to changes in economic conditions, anticipating whatever movements in inflation that might occur will dissipate quickly."

Monetary policy. The Federal Reserve has targeted an inflation rate of 2%, so inflation staying near that range just shows that monetary policy is working.

Changes in the labor market. Workers may be less likely to receive able wage increases when economic conditions are good. Some possible reasons are that the "weakening power of unions in the private sector" or that "and increased global competition may have suppressed wage growth, reducing workers’ abilities to negotiate for higher wages."

Trade and global value chains. "[D]omestic producers may be keeping prices low because they compete with foreign firms."

Technology and online competition. There is discussion sometimes of an "Amazon effect," where increased online purchasing puts pressure on all sellers to keep prices low.

The inflation puzzle raises other questions, too.
Inflation is one of the basic outcomes of macroeconomic models, along with economic growth and labor market outcomes like unemployment rates. It is thus a little jarring to watch a recent Fed chair like Janet Yellen forthrightly accept that we don't really understand what has been driving inflation these last 25 years. But the admission is an honest one, and an invitation to consider the puzzle further.
Posted by Timothy Taylor at 12:33 PM