Reconsidering the "Washington Consensus" in the 21st Century

The "Washington consensus" has become a hissing and a buzzword over time. The usual implication is that free-market zealots in Washington, DC, told developing countries around the world that they would thrive if they followed free-market policies, but when developing countries tried out these policies, they were proven not to work. William Easterly, who has been a critic of the "Washington consensus" in the past, offers an update and some new thinking in "In Search of Reforms for Growth New Stylized Facts on Policy and Growth Outcomes" (Cato Institute, Research Briefs #215, May 20, 2020). He summarizes some ideas from his NBER working paper of the same title (NBER Working Paper 26318, September 2019)/

Before discussing what Easterly has to say, it's perhaps useful to review how the "Washington consensus" terminology emerged. The name traces back to a 1989 seminar in which John Williamson tried to write down what he saw as the main steps that policy-makers in Washington, DC, thought were appropriate for countries in Latin America facing a debt crisis. As Williamson wrote in the resulting essay published in 1990:


No statement about how to deal with the debt crisis in Latin America would be complete without a call for the debtors to fulfill their part of the proposed bargain by "setting their houses in order," "undertaking policy reforms," or "submitting to strong conditionality."
The question posed in this paper is what such phrases mean, and especially what they are generally interpreted as meaning in Washington. Thus the paper aims to set out what would be regarded in Washington as constituting a desirable set of economic policy reforms. ... The Washington of this paper is both the political Washington of Congress and senior members of the administration and the technocratic Washington of the international financial institutions, the economic agencies of the US government, the Federal Reserve Board, and the think tanks. ... Washington does not, of course, always practice what it preaches to foreigners.

Here's how Williamson summed up the 10 reforms he listed in a follow-up essay in 2004:

There are really two main sets of complaints about the "Washington consensus" recommendations. One set of complaints is that a united DC-centered policy establishment was telling countries around the world what to do in an overly detailed and intrusive way. The other complaint was that the recommendations weren't showing meaningful results for improved economic growth in countries of Latin America, Africa, or elsewhere. As Easterly points out, these complaints were being voiced by the mid-1990s.

Conversely, standard responses were that many of these countries had not actually adopted the list of 10 policy reforms. Moreover, the responses went, there is no instant-fix set of policies for raising economic growth, and these policies need to be maintained in place for years (or decades?) before their effects will be meaningful.  And there the controversy (mostly) rested.

Easterly is (wisely) not seeking to refight the specific proposals of the Washington consensus. Instead,  he is just pointing out some basic facts. The share of countries with extremely negative macroeconomic outcomes--like very high inflation, or very high black market premiums on the exchange rate for currency--diminished sharply in the 21st century, as compared to the 1980s and 1990s. Here are a couple of figures from Easterly's NBER working paper: 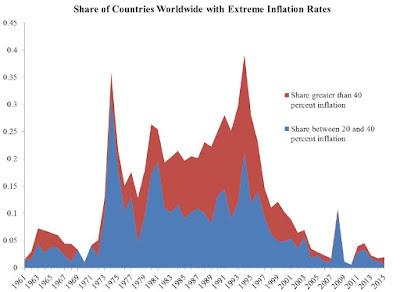 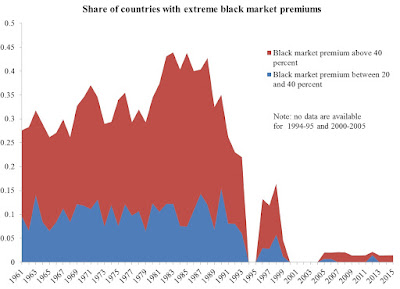 These kinds of figures provide a context for the 1990 Washington consensus: for example, in the late 1980s and early 1990s when between 25-40% of all countries in the world had inflation rates greater than 40%, getting that wildfire under control had a high level of importance.

Easterly also points out that when these extremely undesirable outcomes diminished in the 1990s, growth across countries of Latin America and Africa has done better in the 21st century. Easterly thus offers this gentle reconsideration of the Washington consensus policies:

Despite these caveats, the new stylized facts are consistent with a more positive view of reform, compared to the previous consensus on doubting reform. The reform critics (including me) failed to emphasize the dangers of extreme policies in the previous reform literature or to note how common extreme policies were. Even if the reform movement was far from a complete shift to “free market policies,” it at least seems to have accomplished the elimination of the most extreme policy distortions of markets, which is associated with the revival of growth in African, Latin American, and other countries that had extreme policies.