A Hard-Eyed Look at Mass Transit

Mass transit, as the name suggests, was fundamentally designed on the idea of NOT social distancing, but instead waiting in groups, walking in groups, and sitting and standing in groups. Thus, it's taking a severe hit in the age of COVID-19. There's even a working paper from an MIT economist suggesting that "The Subways Seeded the Massive Coronavirus Epidemic in New York City," although like all working papers, it's subject to criticism and revision.

But even before the pandemic hit, mass transit was struggling in many US cities: subsidies up, ridership down, low-income riders shifting to cars, and environmental question marks. Randal O’Toole provides a hard-eyed overview of the concerns in "Transit: The Urban Parasite" (Cato Institute, Policy Analysis #889, April 20, 2020). He begins:


Data recently released by the Federal Transit Administration (FTA) reveal that taxpayer subsidies to transit grew by more than $3.7 billion, or 7.4 percent, between 2017 and 2018. Despite this increase, ridership fell by 215 million transit trips, or 2.1 percent. The massive increase in spending didn’t even result in an increase in transit service, as measured in vehicle‐​revenue miles, which declined by 0.9 percent.

Preliminary data from the FTA also indicate that 2019 will be the fifth straight year of declining transit ridership, with ridership falling 7.8 percent since 2014 and, in many urban areas, falling by 20 to 30 percent. After adjusting for inflation, annual taxpayer subsidies to transit grew by 15 percent between 2014 and 2018, yet that increase did not prevent the decline in transit ridership. Fares are covering an ever‐​diminishing share of the costs of transit: just 23 percent in 2018. ... A recent Department of Transportation report indicated that the transit industry has a $100 billion maintenance backlog, mostly for its rail lines, and expenditures will have to increase by at least another $6 billion a year to fix this backlog within 20 years.

When confronted by this data, it's important to remember that in economic terms, mass transit is not a "public good":


In fact, transit is not a public good, at least in the economic sense of the term. A public good is one that is nonrivalrous (i.e., one person’s consumption of the good doesn’t reduce another’s consumption of it) and nonexcludable (i.e., no one can be physically denied use of the good). Government often provides public goods because, given those two characteristics, private providers would be hard‐​pressed to have enough paying customers. However, transit does not suffer from either of those characteristics. If I sit in a transit seat, you can’t sit there, too; thus it is rivalrous. Putting gates on the entrances to transit stations and doors on the entrances to buses and other transit vehicles makes transit excludable. Hence, private providers can provide transit services (and in some cases do so)—if there is sufficient demand.

For example, consider the claim that those with lower incomes are more likely to rely on mass transit; O'Toole writes:


The American Community Survey confirms that transit use among low‐​income workers is declining, while transit’s major growth market is among high‐​income workers. The 2017 survey was the first to find that the median income of transit riders was higher than the national median of all workers. This was true in urban areas all over the country, including Boston, Chicago, San Francisco–Oakland, Seattle, and Washington.

In 2018, the median income of transit commuters rose to be higher than people who commute by any other method, including driving, walking, and cycling. Only people who worked at home had higher median incomes. ... The survey further revealed that people in every income class below $25,000 a year are decreasing their use of transit for getting to work and were 6 percent less likely to commute by transit in 2018 than they were in 2010. Meanwhile, people earning more than $65,000 a year were 7 percent more likely to commute by transit in 2018 than in 2010. ...

What about the claim that mass transit is more energy-efficient? O'Toole:

Or the claim that mass transit encourages urban economic vitality?

But comparing transit capital spending with urban‐​area growth rates reveals that such stimulants are, at best, a zero‐​sum game. At most, all transit does is influence the location of new development, not the amount. Moreover, recent data indicate that urban areas that spend the most on transit improvements grow slower than ones that spend less.

Here are three big themes that seem to me to come repeatedly.

First, when it comes to mass transit, New York City is an extreme outlier, although maybe a half-dozen other US cities have a meaningfully large share of people who ride mass transit. O'Toole writes:


[W]hat happens in New York, at least from a transportation view, has almost no applicability anywhere else. With almost 28,000 people per square mile, New York has, by far, the highest population density of any major city in the country, and with more than 71,000 people per square mile, Manhattan is the highest‐​density part of a city. Lower Manhattan has two million jobs, which is 4 times that of any other job concentration in the United States and more than 10 times the number of downtown jobs in all but six other cities. 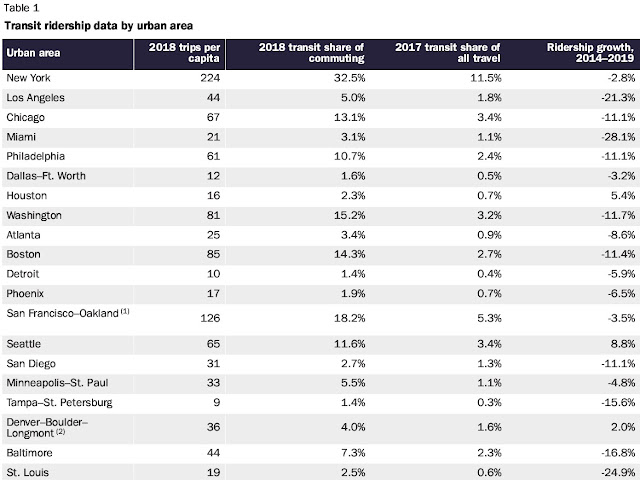 Second, the fundamental problem that mass transit faces around the country is that jobs are no longer as concentrated in a downtown areas. When lots of jobs are in a central area (like Lower Manhattan), then a hub-and-spoke mass transit system can move people between jobs and housing. But if jobs are more dispersed--say, many of them are spread out around the beltway area surrounding the urban core--it's much harder for mass transit to operate cost-effectively without that core of everyday urban commuters.

Finally, as I've written before, if mass transit is to be a public priority, most transit economists tend to see buses as a far more cost-effective and flexible option than mass transit by rail. O'Toole writes:


Outside of New York, buses can replace most rail lines in the country and actually move more people per hour in the same amount of real estate. This is because, for safety reasons, rail lines can typically move no more than 20 railcars or trains per hour in mixed traffic (such as streetcars or light rail) and no more than 30 per hour in dedicated rights of way (such as subways), while a single bus lane can easily move hundreds of buses per hour. ... [B]uses can move more people per hour than most trains, at a far lower cost, and no city outside of New York has the job concentrations that would require a subway system. ... [A]s existing rail lines wear out, transit agencies should replace them with buses. This would save billions of dollars in capital replacement costs.