When it comes to urban mass transit, economists often find themselves arguing that,  the ratio of benefits to costs in most is far better for buses than for rail-based system--unless there is a densely populated urban core where nearly-full trains can run a very frequent intervals. Matthew Turner explains why in "Local Transportation Policy and Economic Opportunity," written for the Hamilton Project  at the Brookings Institution (January 31, 2019).

The main theme of the paper is to think about the current status of U.S. highways, public transit buses, and urban rail cars, and offer some policy suggestions. I'll mention a few of those thoughts in a moment, but here's what Turner has to say about the opinions of economists on light rail and subways (citations omitted):

Economists have long argued against subways and light rail except as a last resort. This argument follows from the high cost of building fixed-rail urban transport. The following example will illustrate this logic. In 2015 the city of Providence, Rhode Island, considered a short, light rail line. Construction of the track and purchase of the rail cars was forecast at about $100 million in all. The system was projected to carry about 2,600 riders per day. The city intended to finance the project with bonds that would pay 3.5 percent interest.

For the sake of illustration, suppose the city only paid interest on the cost of the system, and never paid down the principal. In this case, interest on the bonds would be $3.5 million per year. Now suppose that the system achieved its projected ridership and carried 2,600 riders per day for each of the approximately 250 workdays each year. In that case the system would carry about 650,000 people per year. Dividing the annual bond payments by the number of annual riders works out to about $5.40 per rider in interest—and this is before paying to operate the train or maintain the system. If the operating and maintenance costs of this system were the same as for Rhode Island’s bus system, then those costs would be about $5 per rider. (The annual budget of Rhode Island’s bus network is about $100 million and it carries about 20 million passengers per year.) Thus, the proposed system would likely have cost about $10 per rider. With a fare of $2 or $3, most of this cost would have come out of general revenue.

These calculations make clear why economists so often argue against light rail and subway construction projects. They are so expensive that ridership can only begin to cover construction and maintenance costs if the systems operate at close to their physical capacity most of the time; that is, if there are enough riders to fill up the cars when they run on two- to three-minute headways for many hours per day. Since most proposed projects do not meet this standard, economists generally argue against them. Buses can usually move the projected numbers of riders at a fraction of the cost.

My metro area of Minneapolis/St. Paul has been slowly building some light rail lines. When I drive by them, I do a mental comparison to the costs of building dedicated lanes for buses, and shudder a bit. But as Turner points out, the general pattern of urban mass transit in recent decades has tended to be away from buses and in the direction of rail. 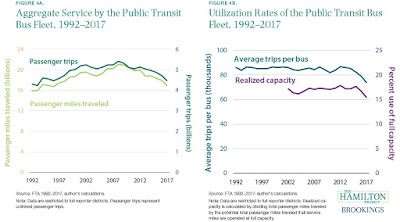 The story for urban rail looks different. The size of the urban rail fleet has been rising. The left-hand figure shows the rise in trips taken by passenger rail. The right-hand side shows that average trips per rail car has been rising, but also that urban rail transit on average runs at less than 20% of capacity. 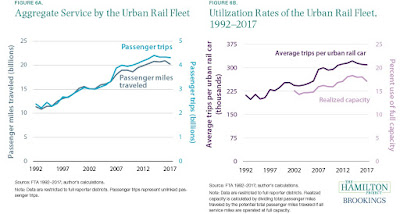 There are different ways to look at these patterns. One is to just accept that urban mass transit will typically run at 20% of capacity, which means it will run at a financial loss, and provide subsidies as needed. Another approach, which works better with buses, is to review the routes every few years, and do some combination of cutting less-used routes, boosting more-used routes, and experimenting with some altered routes. Personally, I sometimes imagine an alternative future where the money that has gone into light rail systems instead went into better bus stops, including networks networks of small bus terminals where people can easily switch between buses, as well as to subsidizing more frequent bus service, but I fear that ship has sailed in many cities.

What about the urban roads? Turner focuses on US highways, not on all roads and bridges, but offers a couple of thoughts that caught my eye. One is that the quality of urban highways--basically, the number of potholes--seems to be improving over time. 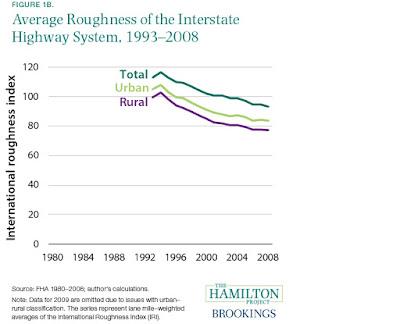 The other thought is to emphasize an old lesson about urban traffic congestion, which is that most congestion is limited to specific time windows. When new road construction untangles a "hot spot" where intertwining lanes of traffic get tangled ever day, it can be useful in reducing congestion. But in general, building more lanes for auto traffic tends to bring more people to the highways during those time windows, with little effect on congestion. It doesn't pass a cost-benefit economic sense to (say) double the number of highway lanes, but then to make full use of those lanes only a few hours a day for five days out of the week. So the question becomes how to spread out the flow of traffic over more hours. Turner writes (citations omitted)::


At its maximum capacity, an interstate highway lane can carry about 2,200 vehicles per hour. Even if we restrict attention to the period from 5:00 am to midnight, this means that each interstate ighway lane can carry about 37,000 vehicles per day. By comparison, urban interstates near the end of our sample period reach AADT [average annual daily travel] levels of about 13,000. Even this high level is less than 40 percent of the daily maximum capacity of these lanes during waking hours. ...

One possible answer for spreading out the traffic to off-peak times is a congestion charge (discussed here and here. for example). Another might be to encourage a number of employers to vary their regular hours, sliding them forward or back in the day. Another might be to enact rules that keep most big trucks off the urban roads during the most congested crunch time.
Posted by Timothy Taylor at 9:51 AM