Oregon has just become the first to enact a statewide rent control law. Governor Kate Brown said: "This legislation will provide some immediate relief to Oregonians struggling to keep up with rising rents and a tight rental market." That statement is of course literally incorrect, because the Oregonians struggling with rising rents are in exactly the same position now as they were before the passage of the law. The new bill limits future increases in rents for existing renters to 7%, plus inflation, so it is clearly not a rigid limit. It will be interesting to see of that limit on future increases gets ratcheted back in the future.

Oregon's proposal is in this way an example of what rent control has evolved to become--not a pure price control, but a more flexible set of rules. Brian J. Asquith provides an overview of the newfangled version of rent control and its effects in "Rent Control—Is the Cure WorseThan the Disease?" written for the W.E. Upjohn Institute in its Employment Research newsletter for January 2019. As Asquith describes it, the rent control rules in New York, San Franciso, Los Angeles, Oakland, and Washington, DC, have four common features:

Here's a table from Asquith showing how cities compare on these dimensions. As far as I can tell on first acquaintance, Oregon's new rent control plan fits right into this general model: 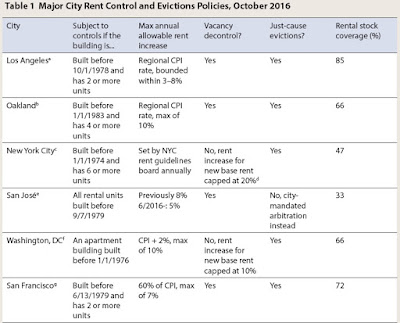 The effects of this kind of moderately flexible rent control are surely less disruptive to housing markets than it would be to have a pure cap on existing rents, the government setting rents for new tenants and new construction, and so on. But supporters of rent control often seem to imply that the such programs are nothing but a way of stopping landlords from exploiting renters. It's of course more complex.

Asquith offers a review of some recent research on the subject, some of which has been discussed on this blog before: for example, see "Rent Control Returns: Thoughts and Evidence" (October 26, 2018), "When Rent Control Ended in Cambridge, Mass." (October 24, 2012), and Asquith's own recent working paper on "Do Rent Increases Reduce the Housing Supply Under
Rent Control? Evidence from Evictions in San Francisco."

The bottom lines from such research are what you might expect. Those who have rent-controlled apartments are more likely to remain there, even when they get jobs that require a longer commute. Landlords try to evade rent control rules, which some success, through methods like converting rental properties to condo ownership and being aggressive about evictions wherever possible. When rent control is in place, both the quantity and quality of rental housing tends to be lower than it would otherwise be. Current renters pay less out of pocket, but future renters have a harder time finding a place and neighborhoods with a higher proportion of renters tend to become run-down. As Asquith writes:

"These measures were largely intended to be temporary, but like many so-called temporary regimes, rent control is the answer to an emergency situation that never seems to end. One reason for rent control’s persistence is that it redistributes benefits from future tenants to present ones. ... rent control is here to stay. The current beneficiaries are well-organized, numerous, and know what they stand to lose from its repeal. The return of rent control to the scholarly agenda is thus propitiously timed to caution policymakers and a frustrated public that while soaring rent burdens are indeed approaching crisis levels in some places, rent control is a policy that has yet to deliver on its promise: affordable rents for all, not just for the few lucky enough to score a controlled apartment."