Reentry from Out of the Labor Market

Each year, the White House Council of Economic Advisers published the Economic Report of the President, which can be thought of as a loyalist's view of the current economic situation. For example, if you are interested in a rock-ribbed defense of the Tax Cuts and Jobs Act passed in December 2017 or of the deregulatory policies of the Trump administration looks like, then Chapters 1 and 2 of the 2019 report are for you. Of course, some people will read these chapters with the intention of citing the evidence in support of the Trump administration, while others will be planning to use the chapters for intellectual target practice. The report will prove useful for both purposes.

Here, I'll focus on some pieces of the 2019 Economic Report of the President that focus more on underlying economic patterns, rather than on policy advocacy.  For example, some interesting patterns have emerged in what it means to be "out of the labor market."

This issue came up a lot in the years after the Great Recession. The official unemployment rate topped out in October 2009 at 10%. But as the unemployment rate gradually declined, the "labor force participation" rate also fell--which means that the share of Americans who were out of the labor force and not looking for a job was rising.You can see this pattern in the blue line below. 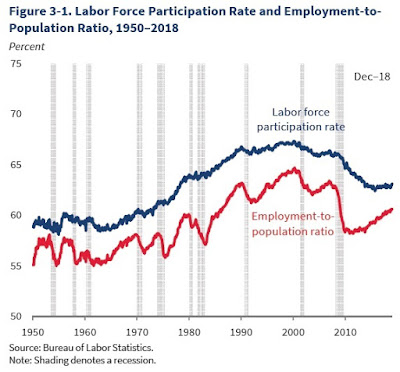 What especially interesting is that many of those taking jobs in the last few years were not being counted as among the "unemployed." Instead, they were in that category of "out of the labor force"--that is, without a job but not looking for work. However, as jobs became more available, they have proved willing to take jobs. Here's a graph showing the share of adults starting work who were previously "out of the labor force" rather than officially "unemployed." 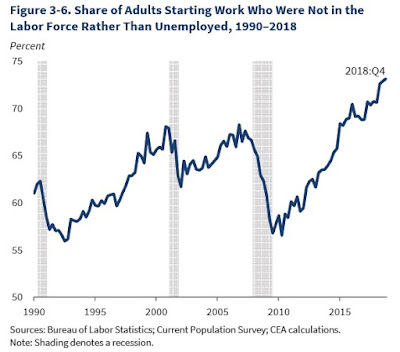 A couple of things are striking about this figure.

1) Going back more than 25 years, it's consistently true that more than half of those starting work were not counted as "unemployed," but instead were "out of the labor force." In other words, the number of officially "unemployed" is not a great measure of the number of people actually willing to work, if a suitable job is available.

2) The ratio is at its  highest level since the start of this data in 1990. Presumably this is because when the official unemployment rate is so low (4% or less since March 2018), firms that want to hire are needing to go after those who the official labor market statistics treated as "not in the labor force."
Posted by Timothy Taylor at 10:35 AM