Work is What Funds Retirement

As as society ages, it needs to redraw the common expectations of when work will end and retirement will begin. Of course, from an individual perspective, retirement age isn't a one-size-fits-all choice. But from an overall social perspective,  Robert L. Clark and John B. Shoven write:


The retirement crisis is in no small measure caused by trying to do the impossible. What we mean by this is that it is nearly impossible to finance 30-year retirements with 40-year careers. Yet with today’s average retirement ages (62 for women and 64 for men), we are trying to do just that. If a 64-/62-year-old couple retired today, the survivor of the couple would have about a 40 percent chance of living an additional 30 years. This division of adult life between work and retirement is at the heart of the financial problems of Social Security and state and local pension plans, and it threatens the adequacy of retirement resources for millions of Americans.

The Brookings Institution and the Kellogg School of Business hosted a conference on these issues in late January. Here, I'll draw on three discussion papers written for that conference:
Some of the adjustment in which longer life expectancies are accompanied by rising labor force participation is already underway. For example, the graph shows the share of those 55 and older who remain in the workforce. Back in the 1950s, about 42-43% of over-55s were in the labor force. By the early 1990s, the proportion had dipped below 30%. It then started rising again--although the upward momentum stalled, at least for now, around the Great Recession. 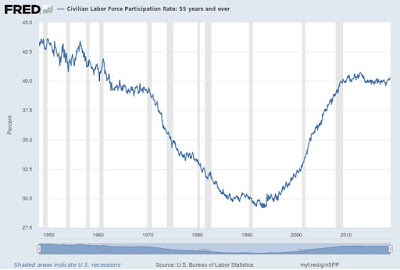 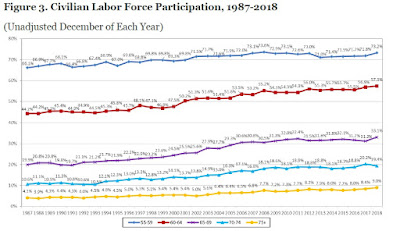 Indeed, many people continue to work after starting to claim Social Security. Here's a figure from the Baily-Harris paper: 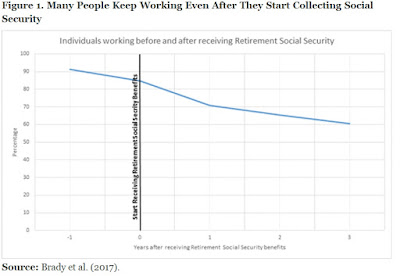 Again, a later retirement age isn't for everyone, of course. But it's worth reconsidering the economic incentives that affect people's decision to keep working, and whether a few more years of accumulating assets and postponing Social Security payments, might be a good choice. After all, as Baily and Harris note: "In July 2018, the Social Security Administration reported that the average monthly benefit paid to retired workers was $1,415 per recipient, a rate of $16,980 a year. This is often insufficient to allow a worker to maintain in retirement the same standard of standard of living enjoyed during their working years. Even if there are two people in a household collecting benefits at this rate, $2,830 a month amounts to a still-modest $33,960 a year. Payments for Medicare coverage and out-of-pocket health costs must be paid for out of this total."

The three papers between them have several suggestions that would tend to have the effect of encouraging those who are on the margin to push back retirement a little, while still leaving open the option of earlier retirement.


When a worker first signs on at the Social Security Administration and discusses their choices for collecting benefits, the framing they are given is about their “full retirement” age. This is 66, rising to 67. Many people take away from this conversation the fact that they should start collecting benefits at the full retirement age, even though they may be much better off to wait until age 70. Waiting increases the level of benefits by about 8 percent for each year until age 70. The message given to older people should be that their maximum benefit comes at age 70 and, though they can collect earlier, this comes at a price in lower benefits for life, and perhaps lower benefits for their spouse.

Munnell and Walters push this theme a little harder by arguing that from a practical and  historical perspective: "A strong case can be made that age 70 is the nation’s real retirement age.18 It is the age that maintains the same ratio of retirement to working years as in 1940, the age at which Social Security provides solid replacement rates, and the age at which most people are assured of retirement security ..." 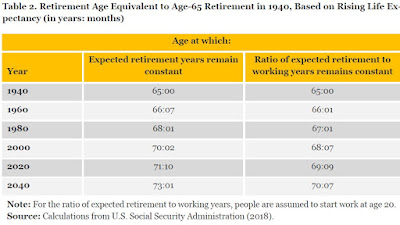 Notice that this particular proposal is all about making public announcements and managing expectations. It's just letting people know, in a clear way, that the current retirement system is set up for them to retire at 70, and that retiring earlier comes with costs in terms of Social Security benefits and long-term financial security.

With this in mind, we advocate three policies that could be adopted to make working longer more financially attractive. They are (1) eliminating the Social Security earnings test, (2) establishing a paid-up category for the Social Security payroll tax, and (3) also establishing a paid-up category for the Medicare payroll tax and simultaneously switching Medicare from secondary to primary payer status. We think the most obvious of our policy proposals is eliminating the earnings test. It is widely misunderstood and produces no long-run revenue for Social Security. It discourages work, not because of what it actually is but because it appears to be a major tax on work for those between the ERA [Early Retirement Age] and the FRA [Full Retirement Age]. Both the paid-up idea and the MPP [Medicare as a primary payer] idea have major appeal.

We estimate if both our second and third proposals were adopted, the net wage would go up by about 40 percent for workers over age 65. This is exactly the age group that is most responsive to wages. In fact, with the higher wages and the resulting additional labor supply, IRS revenues would increase to substantially offset the cost of these programs to Social Security and Medicare. We think the reasonable range for the IRS offset is between 44 and 116 percent of the cost of these new policies. This means, at a minimum, that the offset is significant. With two reasonable assumptions—a labor supply elasticity of 3.0, and a tax rate of 22 percent—the IRS would collect more than enough revenue to completely offset the cost of the initiatives to Social Security and Medicare. Some of these policies, such as the earnings test, were initially implemented during the Great Depression with the explicit goal of encouraging people to retire. We think it is time to turn this thinking on its head and come up with policies to encourage people to work longer.

3) Training older workers to update their digital skills. The symposium authors disagree on whether this kind training is likely to pay off. Baily and Harris describe the mildly optimistic view for at least trying some pilot programs in this way:


Munnell and Walters are skeptical of the potential value of training for older workers, and they are not alone in their skepticism. They point out that the United States spends almost nothing on worker training and that evaluations of worker training programs are often negative. In what may be a triumph of hope over experience, we respectfully disagree, and we think it is worth trying to provide greater training opportunities for older workers using new teaching technologies. One of the reasons companies give for choosing younger workers is that older workers lack proficiency with digital technologies. This is an area where online instruction can make a difference. With guidance from instructors, older workers can improve their capabilities with the programs necessary for both white- and blue-collar jobs. Given what is at stake, it would be worthwhile to establish pilot programs to test whether older workers are willing to take courses and to see whether their employment outcomes are improved as a result.

4) Re-create a Mandatory Retirement Age at 70.  The argument against a mandatory retirement age is that it is a form of age discrimination, and was outlawed (although with a number of exceptions) by amendments passed in 1986 to the Age Discrimination in Employment Act of 1967. But there are also arguments for a mandatory retirement age at age 70: mainly, if employers thinking about hiring someone who is 60 or 65 need to worry that it will be very hard to fire this person without a lawsuite, and in addition that they may be responsible for high health care costs, employers will lean against hiring such workers. Munnell and Walters write:


One tool could be the restoration of some form of mandatory retirement at age 70 (which is substantially higher than mandatory retirement ages in the past), indexed to the age at which Social Security provides the maximum benefit. While employers can dismiss older workers who can no longer do their job, the process is unpleasant and employers worry about age discrimination lawsuits. But employers cannot legally dismiss older workers whose health insurance premiums have risen too high or who have come down with very expensive medical problems. Mandatory retirement would limit the employer’s exposure to the problem of compensation outpacing productivity that typically emerges as workers age. This limit could be key as, given the decline in career employment, hiring decisions have become more important. Putting a lid on tenure could make hiring workers in their 50s and early 60s more attractive, especially for low- and averagewage workers with employers that offer health insurance. ...

5) Provide information to employers and the public about the benefits of older workers.  Munnell and Walters write:


Older workers today are healthier, better educated, and more computer savvy than in the past and, in terms of these basic characteristics, look very much like younger workers. In addition, they bring more to the job in terms of skills, experience, and professional contacts. Finally, they are more likely to remain with their employer longer, and longer tenure enhances productivity and increases profitability for the employer. All of these benefits more than offset any remaining cost differentials between older and younger workers.

They offer a number of interesting details and figures along these lines. This figure offers some comparisons between those in the 30-35 and 55-60 age group. If you are an employer hoping to hire someone who will contribute immediately and reliably, and then stay with your company for the long run, the differences between these groups in health, college degree, and use of a computer at home are not large. Of course, job experience is likely to be much greater for the older group. 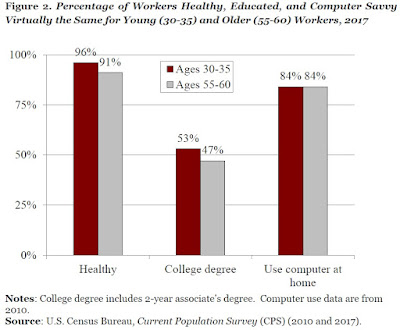 As another example, here's a study of the number of severe errors  (measured by the cost) made on a Mercedes-Benz assembly line. At least in this study, older workers were much less likely to have severe screw-ups. 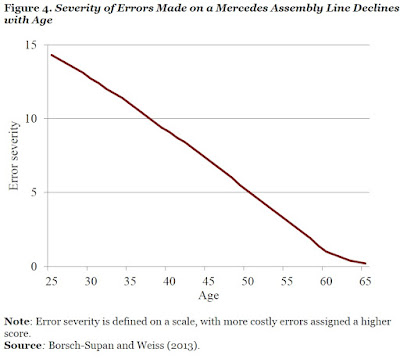 Some economic choices can be made frequently, for small stakes, like where to order a pizza. There are plenty of chances for consumers to learn from experience and for producers to have incentives for for efficiency and experimentation. But other economic choices get made only once in a lifetime. The chance to learn from personal experience is close-to-nonexistent. The transition from work to retirement is that kind of choice. It will be heavily shaped by the design of retirement programs, as well as by the norms and common beliefs of employers and workers. But in a time period when life expectancies are rising, then the design of those retirement programs, as well as the common beliefs of employers and the public about retirement, can become out of synch with reality. Time to consider how some adjustments might happen.
Posted by Timothy Taylor at 9:44 AM