Sources of US Greenhouse Gas Emissions

Each year the Environmental Protection Agency produces an Inventory of U.S. Greenhouse Gas Emissions and Sinks. The draft version of the report for 1990-2017 was published in February 2019.

Here's a figure showing gross emissions of greenhouse gases in the US. Emissions that are not carbon dioxide have been converted to its "equivalent." 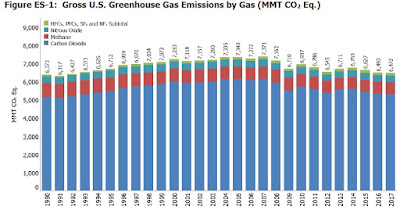 Several themes jump out from the figure. One is that the overwhelming share of emissions are plain old carbon dioxide, rather than methane or other gases. Another is that the total emissions have been dropping in the last few years, and are more-or-less back to 1990 levels, which one can interpret either through the lens of "could be worse" or "should be better," as you are so inclined. 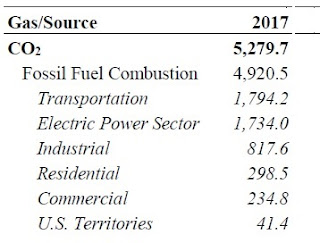 Total US emissions of greenhouse gases in 2017 were 6472 million metric tons of carbon dioxide-equivalent.  Thus, transportation and the electric power sector combined account for more than half of all emissions. It seems to me both appropriate to focus on reducing emissions in those sectors, but also to remember that, combined, they are only about half of the problem. Emissions from industrial, residential, and commercial activities are also pretty significant.


This EPA report is a tabulation of greenhouse gas emissions. It isn't about questions of how emissions of greenhouse gases might affect climate, or estimating economics costs from changes in climate, or about what methods of addressing greenhouse gas emissions are likely to be more or less cost-effective. For discussions of these points, I recommend a three-paper "Symposium on Climate Change" in the Fall 2018 issue of the Journal of Economic Perspectives. (Full disclosure: My actual paid job, as opposed to my blogging avocation, is Managing Editor of the JEP.) The papers are: