The Bad News about the Big Jump in Average Hourly Wages

Average hourly wages in April 2020 were 7.9% higher than a year earlier, a very high jump. And as a moment's reflection will suggest, this is actually part of the terrible news for the US labor market. Of course, it's not true that the average hourly worker is getting a raise of 7.9%. Instead, the issue is that only workers who have jobs are included in the average. So the big jump in average hourly wages is actually telling us that a much higher proportion of workers with below-average wages have lost their jobs, so that the average wage of the hourly workers who still have jobs has risen.

Here's are a couple of illustrative figures, taken from the always-useful US Economy in a Snapshot published monthly by the Federal Reserve Bank of New York. The blue line in this figure shows the rise in average hourly wages over the previous 12 months. The red line shows a measure of inflation, the Employment Cost Index. There has been lots of concern in the last few years about why wages were not rising more quickly, and as you can see, the increase in average earnings had pulled ahead of inflation rates in 2019. 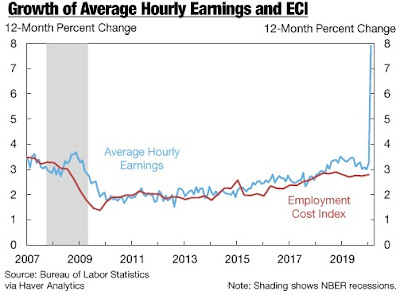 However, the US economy is of course now experiencing a sharp fall in the number of hours worked. As the NY Fed notes, nonfarm payrolls fell by 20 million jobs in April, the largest fall in the history of this data series. Total weekly hours worked in the private sector fell by 14.9% in April compared with 12 months earlier. No matter how many checks and loans are handed out, the US economy will not have recovered until hours worked returns to normal levels. 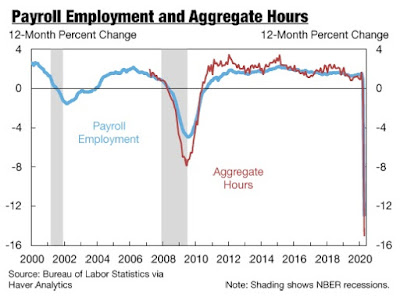 There's nothing nefarious about these statistics. The average hourly wage is standard statistic published every month. The government statisticians just publish the numbers, as they should. It's up to citizens to understand what they mean.

Posted by Timothy Taylor at 1:14 PM