I am now in my 34th year as Managing Editor of the Journal of Economic Perspectives. The JEP is published by the American Economic Association, which decided about a decade ago--to my delight--that the journal would be freely available on-line, from the current issue all the way back to the first issue. You can download it various e-reader formats, too. Here, I'll start with the Table of Contents for the just-released Spring 2020 issue, which in the Taylor household is known as issue #132. Below that are abstracts and direct links for all of the papers. I will probably blog more specifically about some of the papers in the next week or two, as well. 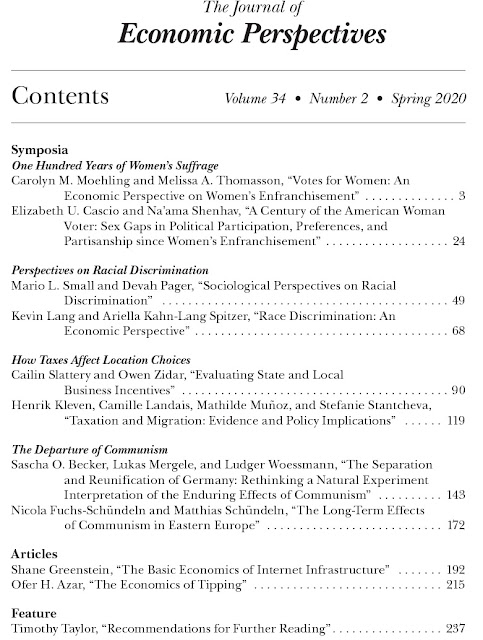 "Votes for Women: An Economic Perspective on Women's Enfranchisement," by Carolyn M. Moehling and Melissa A. Thomasson
The ratification of the Nineteenth Amendment in 1920 officially granted voting rights to women across the United States. However, many states extended full or partial suffrage to women before the federal amendment. In this paper, we discuss the history of women's enfranchisement using an economic lens. We examine the demand side, discussing the rise of the women's movement and its alliances with other social movements, and describe how suffragists put pressure on legislators. On the supply side, we draw from theoretical models of suffrage extension to explain why men shared the right to vote with women. Finally, we review empirical studies that attempt to distinguish between competing explanations. We find that no single theory can explain women's suffrage in the United States and note that while the Nineteenth Amendment extended the franchise to women, state-level barriers to voting limited the ability of black women to exercise that right until the Voting Rights Act of 1965.
Full-Text Access | Supplementary Materials


"A Century of the American Woman Voter: Sex Gaps in Political Participation, Preferences, and Partisanship since Women's Enfranchisement," by Elizabeth U. Cascio and Na'ama Shenhav
This year marks the centennial of the Nineteenth Amendment, which provided American women a constitutional guarantee to the franchise. We assemble data from a variety of sources to document and explore trends in women's political participation, issue preferences, and partisanship since that time. We show that in the early years following enfranchisement, women voted at much lower rates than men and held distinct issue preferences, despite splitting their votes across parties similarly to men. But by the dawn of the twenty-first century, women not only voted more than men, but also voted differently, systematically favoring the Democratic party. We find that the rise in women's relative voter turnout largely reflects cross-cohort changes in voter participation and coincided with increasing rates of high school completion. By contrast, women's relative shift toward the Democratic party permeates all cohorts and appears to owe more to changes in how parties have defined themselves than to changes in issue preferences. The findings suggest that a confluence of factors have led to the unique place women currently occupy in the American electorate, one where they are arguably capable of exerting more political influence than ever before.
Full-Text Access | Supplementary Materials

"Evaluating State and Local Business Incentives,"by Cailin Slattery and Owen Zidar
This essay describes and evaluates state and local business tax incentives in the United States. In 2014, states spent between 5 USD and 216 USD per capita on incentives for firms in the form of firm-specific subsidies and general tax credits, which mostly target investment, job creation, and research and development. States with higher per capita incentives tend to have higher state corporate tax rates. Recipients of firm-specific incentives are usually large establishments in manufacturing, technology, and high-skilled service industries, and the average discretionary subsidy is 178M USD for 1,500 promised jobs. Firms tend to accept subsidy deals from places that are richer, larger, and more urban than the average county, and poor places provide larger incentives and spend more per job. Comparing winning and runner-up locations for each deal, we find that average employment within the three-digit industry of the deal increases by roughly 1,500 jobs. While we find some evidence of direct employment gains from attracting a firm, we do not find strong evidence that firm-specific tax incentives increase broader economic growth at the state and local level.
Full-Text Access | Supplementary Materials

"Taxation and Migration: Evidence and Policy Implications," by Henrik Kleven, Camille Landais, Mathilde Muñoz, and Stefanie Stantcheva
In this article, we review a growing empirical literature on the effects of personal taxation on the geographic mobility of people and discuss its policy implications. We start by laying out the empirical challenges that prevented progress in this area and then discuss how recent work has made use of new data sources and quasi-experimental approaches to credibly estimate migration responses. This body of work has shown that certain segments of the labor market, especially high-income workers and professions with little location-specific human capital, may be quite responsive to taxes in their location decisions. When considering the implications for tax policy design, we distinguish between uncoordinated and coordinated tax policy. We highlight the importance of recognizing that mobility elasticities are not exogenous, structural parameters. They can vary greatly depending on the population being analyzed, the size of the tax jurisdiction, the extent of tax policy coordination, and a range of non-tax policies. While migration responses add to the efficiency costs of redistributing income, we caution against over-using the recent evidence of (sizeable) mobility responses to taxes as an argument for less redistribution in a globalized world.
Full-Text Access | Supplementary Materials

Symposium: The Departure of Communism

"The Separation and Reunification of Germany: Rethinking a Natural Experiment Interpretation of the Enduring Effects of Communism," by Sascha O. Becker, Lukas Mergele and Ludger Woessmann
German separation in 1949 into a communist East and a capitalist West and their reunification in 1990 are commonly described as a natural experiment to study the enduring effects of communism. We show in three steps that the populations in East and West Germany were far from being randomly selected treatment and control groups. First, the later border is already visible in many socio-economic characteristics in pre-World War II data. Second, World War II and the subsequent occupying forces affected East and West differently. Third, a selective fifth of the population fled from East to West Germany before the building of the Wall in 1961. In light of our findings, we propose a more cautious interpretation of the extensive literature on the enduring effects of communist systems on economic outcomes, political preferences, cultural traits, and gender roles.
Full-Text Access | Supplementary Materials

"The Long-Term Effects of Communism in Eastern Europe," by Nicola Fuchs-Schündeln and Matthias Schündeln
We analyze the long-term effects of communism on both policies and preferences in Eastern Europe in four areas in which the communist and capitalist doctrines fundamentally differ: government intervention in markets, political freedom, and inequality in incomes and across genders. Macroeconomic indicators related to these areas show convergence of the East to the West. However, residents in the East express less support for democracy and a stronger desire for redistribution, in line with the communist doctrine. Their preferences for the market economy are on average similar to the ones in the West, and their support of female labor force participation is even lower. To establish an effect of communism on preferences, we recur to cohort differences. In all four areas, older cohorts in the East who have lived under communism for a longer time show preferences more in line with communism than younger cohorts, compared to the same cohort gradient in the West.
Full-Text Access | Supplementary Materials

"The Basic Economics of Internet Infrastructure," by Shane Greenstein
The internet's structure and operations remain invisible to most economists. What determines the economic value of internet infrastructure and the incentives to improve it? What are the open research questions for the most salient policy issues? This article reviews the basic economics of internet infrastructure, focusing attention on the economic questions motivated by public aspirations for ubiquitous availability and widespread adoption of internet protocols.
Full-Text Access | Supplementary Materials

"The Economics of Tipping," by Ofer H. Azar
Tipping involves dozens of billions of dollars annually in the US alone and is a major income source for millions of workers. But beyond its economic importance and various economic implications, tipping is also a unique economic phenomenon in that people pay tips voluntarily without any legal obligation. Tipping demonstrates that psychological and social motivations can be a substantial reason for economic behavior, and that economic models should go beyond a selfish economic agent who has no feelings in order to capture the full range of economic activities. This article discusses some aspects of tipping, with an emphasis on economic issues: the history of tipping, the main reasons for tipping, why tipping could be a welfare-increasing and sustainable social norm, the relationship between tipping and service quality, how tipping represents a struggle over rents, and issues of discrimination and sexual harassment related to tipping.
Full-Text Access | Supplementary Materials
"Recommendations for Further Reading," Timothy Taylor
Full-Text Access | Supplementary Materials
Posted by Timothy Taylor at 9:53 AM