Kekst CNC is a "communications strategy" firm that has been doing a series of public opinion polls about COVID-19. Their "COVID-19 Opinion Tracker: Fourth Edition" report surveyed 1,000 adults in different countries, during the time period from July 10-15, 2020. The report includes questions about beliefs on how long the virus will last, how local and national government is performing, how business is performing, feelings about returning to work and wearing masks, and other topics.

One result that caught my eye was that they asked people to estimate the number of people in their country who had contracted COVID-19 and the number who had died from it. Here are the results for the UK (blue) the US (yellow), Germany (pink), Sweden (green) and France (purple). 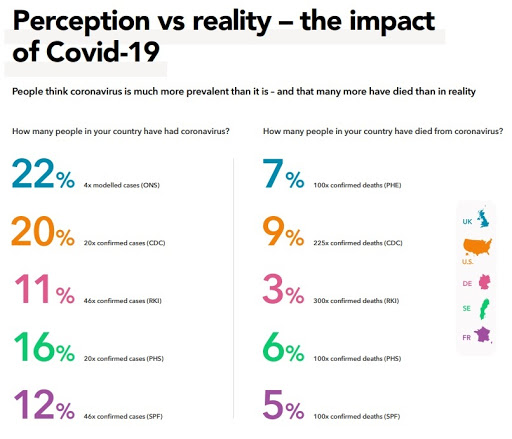 When you point out that people are wildly wrong in their numerical estimates of cases and especially deaths from COVID-19, a  common answer is something like "you are just trying to minimize the problem." Look, I understand that in this 21st-century, social-media world, there is a widespread view that if you aren't exaggerating, you aren't serious. I hope you will forgive me for being lousy at that form of "persuasion." (Also, if people estimated that half or two-thirds of the total population had already died, would that make them even more "serious"?)

My own belief is that this poll confirms that many people are innumerate about basic percentages. In the US, for example, saying that 9% of the existing population has already died of COVID-19 would imply roughly 29 million deaths so far. It would imply that one out of every eleven people in the country had already died from COVID-19 in mid-July. Given that in a big country, some places will inevitably have more severe outbreaks than others, there would need to be news stories where, say, half the people in certain neighborhood or small towns had died of COVID-19.

It's hard to get revved up about innumeracy. But if you have little feel for what kinds of numbers are even plausible in a given situation, you are more likely to end up as a sucker for a glib talker with a scenario to sell.