The Rise of the US Social Insurance State

One sometimes hears a reference to "the rise of the welfare state," but for the US in the 20th century, the pattern is more accurately described as a "rise of the social insurance state"--which isn't quite the same thing. Price V. Fishback uses this insight as a stepping-stone in "Social Insurance and Public Assistance in the Twentieth-Century United States," which he delivered as the Presidential Address to the Economic History Association last year, and now has been published in the Journal of Economic History (June 2020,  80:2, pp. 311-350).  Fishback's argument unfolds in three parts:

First, what many people call the rise in the welfare state in the United States might better be described as the “Rise of the Social Insurance State.”  “Rise of the Welfare State” could be seen as a rise in public assistance  transfers to the poor. Yet, such transfers have not been very large relative to gross domestic product (GDP). A very large share of the expansion in social welfare spending has come from social insurance that covers people throughout the income distribution. The social insurance programs were much easier to sell politically and carried much less social stigma because participants felt that they or their employers had paid for their benefits up front.

Here's an illustrative figure. Social insurance spending in the 20th century goes from 1% of GDP to 10%. If one includes the rise in private health insurance and private pensions--both encouraged by the government through favorable tax treatment and friendly regulations--the rise of the social insurance state would look even bigger.  In contrast, work relief (during the Great Depression) and public assistance programs or the poor (in the later 20th century) are much smaller. 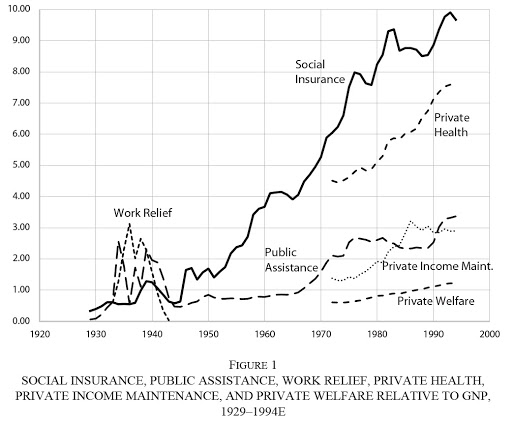 Fishback's second point suggests that total US spending on "social welfare" categories is similar to that of European countries--the US just has more of this spending happening in the private sector. He writes:

Second, America is commonly perceived to spend much less on social welfare than many European countries. This perception arises because most comparisons focus on gross public social welfare spending. In fact, after taking into account taxation, public mandates, and private spending, the United States in the late twentieth century spent a higher share on combined private and net public social welfare relative to GDP than did most advanced economies. Americans just did it differently because the governments operated a safety net system that relied to a much greater extent on private insurance and pensions and taxed lower income people less heavily.

Fishback points out in in OECD statistics, "government social welfare expenditures include old-age pensions, survivor benefits (not from private life insurance), incapacity-related aid, health expenditures, aid to families, unemployment benefits, income maintenance, government job training, and housing subsidies." But in the US, of course, a large share of health expenditures and old-age pensions happens through the private sector. When you include both public and private spending in these areas, total US spending looks much more similar to countries like Germany, Sweden, and France.

This point is well-taken. But of course, it's also true that if total US spending on these social welfare categories is close to these other countries, if lagging a bit behind, and it's also true that US spending on health care as share of GDP is much bigger than these other countries, then it follows that US social welfare spending in the non-health categories must be lagging well behind.

Finally, Fishback sets out to disentangle some of the complexity that arises because many US social welfare programs are run through the states, which can have different rule. Fishback writes:

Third, the United States has 51 or more social welfare systems that set target minimum benefits for public assistance for the elderly and families in poverty and maximum benefits for social insurance programs. ... [T]he spending is designed to fill the gap between a target level of living and the household’s resources. ... I develop estimates of these target benefits for each state for several years in the twentieth century and compare them to several measures of economic well-being: the national poverty line before and after adjusting for cross-sectional differences in cost of living, state  manufacturing earnings and benefits, state per capita incomes, and per capita GDPs in countries around the world. The comparisons show that the public assistance targets have been more generous to the elderly poor than to poor families.

In broad terms, Social Security and Medicare--both of which can be categorized as "social insurance" programs--have been a substantial boost for the elderly poor. However, the social insurance and public assistance programs aimed at families--for example, cash welfare payments, unemployment insurance,  and workman's compensation--pay much less in the United States than in many other countries.