I am now in my 34th year as Managing Editor of the Journal of Economic Perspectives. The JEP is published by the American Economic Association, which decided about a decade ago--to my delight--that the journal would be freely available on-line, from the current issue all the way back to the first issue. You can download it various e-reader formats, too. Here, I'll start with the Table of Contents for the just-released Summer 2020 issue, which in the Taylor household is known as issue #133. Below that are abstracts and direct links for all of the papers. I will probably blog more specifically about some of the papers in the next week or two, as well. 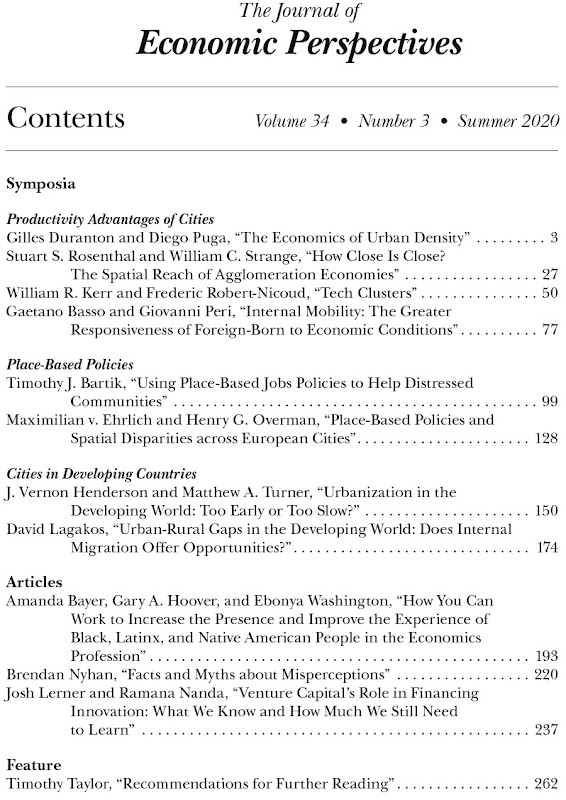 ______________________________
Symposium: Productivity Advantages of Cities
"The Economics of Urban Density," by Gilles Duranton and Diego Puga
Density boosts productivity and innovation, improves access to goods and services, reduces typical travel distances, encourages energy efficient construction and transport, and allows broader sharing of scarce urban amenities. However, density is also synonymous with crowding and makes living and moving in cities more costly. We explore the appropriate measurement of density and describe how it is both a cause and a consequence of the evolution of cities. We then discuss whether and how policy should target density and why, in practice, the tradeoff between its pros and cons is unhappily resolved by both market and political forces.
Full-Text Access | Supplementary Materials

"Tech Clusters," by William R. Kerr and Frederic Robert-Nicoud
Tech clusters like Silicon Valley play a central role for modern innovation, business competitiveness, and economic performance. This paper reviews what constitutes a tech cluster, how they function internally, and the degree to which policy makers can purposefully foster them. We describe the growing influence of advanced technologies for businesses outside of traditional tech fields, the strains and backlash that tech clusters are experiencing, and emerging research questions for theory and empirical work.
Full-Text Access | Supplementary Materials

"Internal Mobility: The Greater Responsiveness of Foreign-Born to Economic Conditions," by Gaetano Basso and Giovanni Peri
In this article, we review the internal geographic mobility of immigrants and natives in the United States in the recent decades, with a focus on the period since 2000. We confirm a continuing secular decline in mobility already pointed out by the existing literature, and we show that it persisted in the post great recession period. We then focus on foreign-born and establish that, on average, they did not have total mobility rates higher than that of natives. However, their mobility response to local economic conditions was stronger than the response of natives in the period from 1980 to 2017. A review of recent research reveals that the higher elasticity of mobility of immigrants to economic conditions is a combination of lower sensitivity to local prices, higher propensity to move in the early years after immigration, and strong economic success of cities that were immigrant enclaves in the 1980s.
Full-Text Access | Supplementary Materials

"Using Place-Based Jobs Policies to Help Distressed Communities," by Timothy J. Bartik
Place-based jobs policies seek to create jobs in particular local labor markets. Such policies include business incentives provided by state and local governments, which cost almost 50 billion USD annually. The most persuasive rationale for these policies is that they can advance equity and efficiency by increasing long-term employment rates in distressed local labor markets. However, current incentives are not targeted at distressed areas. Furthermore, incentives have high costs per job created. Lower costs can be achieved by public services to business, such as manufacturing extension, customized job training, and infrastructure. Reforms to place-based jobs policies should focus on greater targeting of distressed areas and using more cost-effective policies. Such reforms could be achieved by state and local governments acting in their residents' interests or could be encouraged by federal interventions to cap incentives and provide aid to distressed areas.
Full-Text Access | Supplementary Materials


"Place-Based Policies and Spatial Disparities across European Cities," by Maximilian v. Ehrlich and Henry G. Overman
Spatial disparities in income levels and worklessness in the European Union are profound, persistent and may be widening. We describe disparities across metropolitan regions and discuss theories and empirical evidence that help us understand what causes these disparities. Increases in the productivity benefits of cities, the clustering of highly educated workers and increases in their wage premium all play a role. Europe has a long-standing tradition of using capital subsidies, enterprise zones, transport investments and other place-based policies to address these disparities. The evidence suggests these policies may have partially offset increasing disparities but are not sufficient to fully offset the economic forces at work.
Full-Text Access | Supplementary Materials

Symposium on Cities in Developing Countries


"Urban-Rural Gaps in the Developing World: Does Internal Migration Offer Opportunities?" by David Lagakos
This article provides an overview of the growing literature on urban-rural gaps in the developing world. I begin with recent evidence on the size of the gaps as measured by consumption, income, and wages, and argue that the gaps are real rather than just nominal. I then discuss the role of sorting more able workers into urban areas and review an array of recent evidence on outcomes from rural-urban migration. Overall, migrants do experience substantial gains on average, though smaller than suggested by the cross-sectional gaps. I conclude that future work should help further explore the frictions—in particular, information, financial, and in land markets—that hold back rural-urban migration and may help explain the persistence of urban-rural gaps.
Full-Text Access | Supplementary Materials

"How You Can Work to Increase the Presence and Improve the Experience of Black, Latinx, and Native American People in the Economics Profession," by Amanda Bayer, Gary A. Hoover and Ebonya Washington
Recently in economics there has been discussion of how to increase diversity in the profession and how to improve the work life of diverse peoples. We conducted surveys and interviews with Black, Latinx and Native American people. These groups have long been underrepresented in the economics profession. Participants were at various stages along the economics career trajectory, or on the trajectory no longer, and used their lived experience to reflect on what helps and hurts underrepresented minorities in economics. We heard a few consistent themes: bias, hostile climate, and the lack of information and good mentoring among them. Respondents' insights and experience point toward action steps that you can take today to increase the presence and improve the work life of underrepresented minorities in the economics profession.
Full-Text Access | Supplementary Materials


"Facts and Myths about Misperceptions," by Brendan Nyhan
Misperceptions threaten to warp mass opinion and public policy on controversial issues in politics, science, and health. What explains the prevalence and persistence of these false and unsupported beliefs, which seem to be genuinely held by many people? Though limits on cognitive resources and attention play an important role, many of the most destructive misperceptions arise in domains where individuals have weak incentives to hold accurate beliefs and strong directional motivations to endorse beliefs that are consistent with a group identity such as partisanship. These tendencies are often exploited by elites who frequently create and amplify misperceptions to influence elections and public policy. Though evidence is lacking for claims of a "post-truth" era, changes in the speed with which false information travels and the extent to which it can find receptive audiences require new approaches to counter misinformation. Reducing the propagation and influence of false claims will require further efforts to inoculate people in advance of exposure (for example, media literacy), debunk false claims that are already salient or widespread (for example, fact-checking), reduce the prevalence of low-quality information (for example, changing social media algorithms), and discourage elites from promoting false information (for example, strengthening reputational sanctions).
Full-Text Access | Supplementary Materials


"Venture Capital's Role in Financing Innovation: What We Know and How Much We Still Need to Learn," by Josh Lerner and Ramana Nanda
Venture capital is associated with some of the most high-growth and influential firms in the world. Academics and practitioners have effectively articulated the strengths of the venture model. At the same time, venture capital financing also has real limitations in its ability to advance substantial technological change. Three issues are particularly concerning to us: 1) the very narrow band of technological innovations that fit the requirements of institutional venture capital investors; 2) the relatively small number of venture capital investors who hold and shape the direction of a substantial fraction of capital that is deployed into financing radical technological change; and 3) the relaxation in recent years of the intense emphasis on corporate governance by venture capital firms. While our ability to assess the social welfare impact of venture capital remains nascent, we hope that this article will stimulate discussion of and research into these questions.
Full-Text Access | Supplementary Materials