The World Economy Through a PPP Lens

When comparing the size of economies, you need to use an exchange rate to convert the GDP of one country, measured in its own currency, to compare with the GDP of the other country. But what exchange rate to use?
An obvious choice is the market exchange rate. An equally obvious problem is that the exchange rates fluctuate.  If the exchange rate of a country strengthens by 10% in a certain month, that of course doesn't mean that the standard of living for people in that country rose by 10% during that month. When you compare economies using a market exchange rate, it's a little like measuring with a ruler which without warning grows and shrinks.
There's also a more subtle problem with using market exchange rates to compare economies. Say that in one country, housing or health care or higher education is much cheaper than in some other country. As a concrete example, one often reads about moving or retiring to some other country with a much lower cost of living--where you can buy that lovely home for so much less than in the United States. If you just look at total size of GDP for that country with lower prices, converted at a market exchange rate, you would not be able to tell that because of the lower price level, the GDP actually represents a higher quantity of goods being consumed than you might expect.
A common alternative is "purchasing power parity" exchange rates. Like the name implies, these exchange rates are calculated to reflect the purchasing power of a currency within the country. This is not a new idea: the first academic research using a PPP exchange rate was published in 1940. But in recent decades, the standard source for calculating PPP exchange rates is the International Comparison Project at the World Bank, which has published its report "Purchasing Power Parities and the Size of World Economies: Results from the 2017 International Comparison Program" (May 2020)
It is typically true that lower-income countries have cheaper goods and services. Thus,  when you look at the purchasing power of their currency in their own country, it tends to be greater than the market exchange rate would imply. Here's a figure showing price levels across countries. The horizontal axis shows per capita GDP, so higher-income countries are on the right. The vertical axis shows the price level across countries. The figure helps explain why places like Mexico and Thailand are such popular tourist and even retirement destinations for people from high-income countries: your income buys more in those countries. 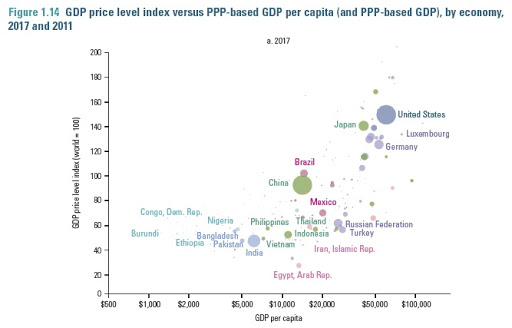 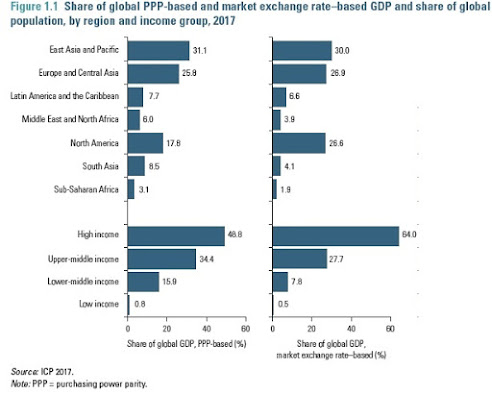 If the comparison is done using a PPP exchange rate, the economy of China was bigger than that of the United States in 2017.
Here's an overview of the global economy measured in per capita GDP. The vertical axis measures the share of global population--and population is shown by the height of each bar. Thus, the bars for China, India, and the United States are especially tall. The horizontal width of the bar measures per capita GDP, using a PPP comparison. The light-blue lines on the left show 2011; the darker-blue bars on the right show 2017. You can see a number of modest changes in this six-year period: the rise of China and India, Turkey moving ahead of the Russian Federation in per capita GDP, and others. 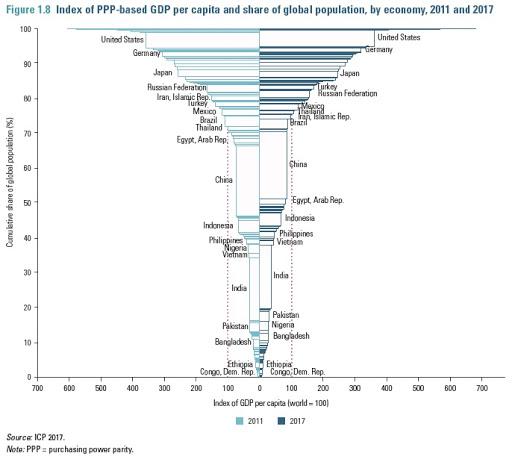 Two additional thoughts are worth passing along. First, the PPP exchange rates are explicitly intended to compare GDP, per capita GDP, and similar measures across countries, to make that useful adjustment for different price levels across countries. For other uses, they may not be appropriate. The report notes: "ICP PPPs are designed specifically for international comparisons of GDP. They are not designed
for comparisons of monetary flows or trade flows. International comparisons of flows—such
as development aid, foreign direct investment, migrants’ remittances, or imports and exports of
goods and services—should be made with market exchange rates, not with PPPs."
Second, it may have occurred to you that measuring price levels in a comparable way across all the countries of the world, in a way that adjusts for differences in quality and availability of various goods and services, is a Herculean task. There's a reason why the estimated PPP exchange rates for 2017 are being published in 2020--it takes time to put all this together. The report describes the methodology in some detail, but there is room for skepticism. Indeed, back in in 2010 Angus Deaton devoted his Presidential Address to the American Economic Association (freely available on-line here) to detailing the "weak theoretical and empirical foundations" of such measurements. But for anyone who ha read this far, it will come as no surprise that imperfect economic statistics can still be useful, when applied with context and caution.
Posted by Timothy Taylor at 4:18 PM