How the US Start-Up Industry is Faltering

One of the long-term strengths of the US economy has been that it fostered the growth of new businesses. Some provided employment for only a few, while others grew into giants. But that dynamic process of new businesses ultimately benefited not just those who worked in them, but also innovation, productivity, and consumers. But as I have pointed out in the past, there are a variety of signs that this business dynamism has been declining. Here are some additional pieces of evidence:
Thomas Astebro, Serguey Braguinsky, and Yuheng Ding discuss "Declining Business Dynamism Among Our Best Opportunities: The Role of the Burden of Knowledge" (September 2020, NBER Wroking paper 27787). They write:

We employ the nationally representative Survey of Doctorate Recipients to show a decline over the past 20 years in both the rate of startups founded and the share of employment at startups by the highest-educated science and engineering portion of the U.S. workforce. The declines are wide-ranging and not driven by any particular founder demographic category or geographic region or scientific discipline. 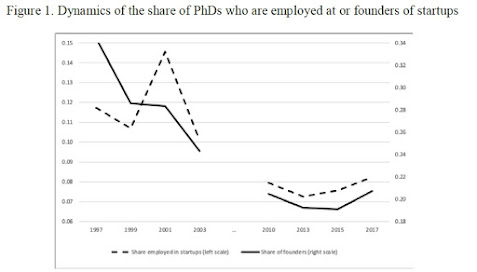 They argue that when dealing with new technology, the benefits of working established firm may be rising. They point out that PhDs in science and engineering who are starting firms now do tend to hae more business experience, suggesting that the task of running a new technology-based business might be becoming more complex, even as the potential rewards for doing so may be diminishing.
Rasmus Koss Hartmann, Anders Dahl Krabbe, and André Spicer offer one possible explanation in "Towards an Untrepreneurial Economy? The Entrepreneurship Industry and the Rise of the Veblenian Entrepreneur" (available at SSRN, version of July 9, 2020):  They write (many citations omitted):

The suggest that a possible answer is the rise of the "Entrepreneurship Industry," which has the goal of selling to people who want to see themselves as entrepreneurs. They write:

Josh Lerner and Ramana Nanda offer a different set of concerns in "Venture Capital's Role in Financing Innovation: What We Know and How Much We Still Need to Learn" (Journal of Economic Perspectives, Summer 2020, pp. 237-61). They argue that while the venture capital industry has had some great successes in the past, "venture capital financing also has real limitations in its ability to advance substantial technological change." In particular,

Three issues are particularly concerning to us: 1) the very narrow band of technological innovations that fit the requirements of institutional venture capital investors; 2) the relatively small number of venture capital investors who hold and shape the direction of a substantial fraction of capital that is deployed into financing radical technological change; and 3) the relaxation in recent years of the intense emphasis on corporate governance by venture capital firms. We believe these phenomena, rather than being short-run anomalies associated with the ebullient equities market from the decade or so up through early 2020, may have ongoing and detrimental effects on the rate and direction of innovation in the broader economy.

They argue that venture capital firms have become narrower in their focus, looking for firms where the uncertainty about whether the business will succeed is likely to be resolved fairly quickly, and thus less willing to take on a wider variety of start-up ideas where the uncertainty will remain for a substantial time--and where the direct involvement of the venture capital firm in corporate governance over an extended time might make the difference between success and failure. As one example, here's how the focus of Charles River Associates has evolved over time:

Charles River Ventures was founded by three seasoned executives from the operating and investment worlds in 1970. Within its first four years, it had almost completely invested its nearly $6 million first fund into 18 firms. These included classes of technologies that would be comfortably at home in a typical venture capitalist’s portfolio today: a startup designing computer systems for hospitals (Health Data Corporation), a software company developing automated credit scoring systems (American Management Systems), and a firm seeking to develop an electric car (Electromotion, which, alas, proved to be a few decades before its time). Other companies, however, were much more unusual by today’s venture standards: for instance, startups seeking to provide birth control for dogs (Agrophysics), highstrength fabrics for balloons and other demanding applications (N.F. Doweave), and turnkey systems for pig farming (International Farm Systems). Only eight of the 18 initial portfolio companies—less than half—were related to communications, information technology, or human health care.

The portfolio of Charles River Ventures looks very different in December 2019. Of the firms listed as investments, about 90 percent are classified as being related to information technology comprising social networks, applications for consumers, and software and services related to enhancing business productivity. Approximately 5 percent of investments are classified as being related to health care, materials, and energy. This shift in Charles River’s portfolio reflects the patterns of the industry at large ...

I don't feel as if I have a good handle on all the reasons for the decline in US startup firms. But it does seem to me that a lot of the private sector has become highly focused on start-up firms that involve web-based networking in one way or another. Fortunes can be made in such firms with a relatively small number of employees. In contrast, as Lerner and Nanda point out, start-ups in areas like clean energy or new materials may not have as clear a path to follow, and those thinking about starting such firms may not find it easy to get support from venture capital or with other parts of the finance system for start-ups.