By now, it's old news to anyone paying attention that the federal debt, based on current law, is on a trajectory to rise in an unsustainable way over the next few decades. What is less well-known, I think, is the extent to which these forecasts for rising federal debt rely on interest payments soaring out of control. The message comes through clearly in the Congressional Budget Office report "The 2020 Long-Term Budget Outlook" (September 2020).

Here's the CBO projection for where federal debt is headed, based on current law. The federal debt/GDP ratio is now on the verge of surpassing its previous high, which was the debt incurred to fight World War II. These debt projections are typically viewed as conservative, because Congress often passes laws that suggest taxes will be raised or spending will be cut several years off in the future; for example, that the tax cuts in the 2017 Tax and Jobs Act will end in 2025. The CBO projections faithfully assume that these future tax increases and spending cuts will be enacted, but often when the date gets near, they are postponed until further into the future. 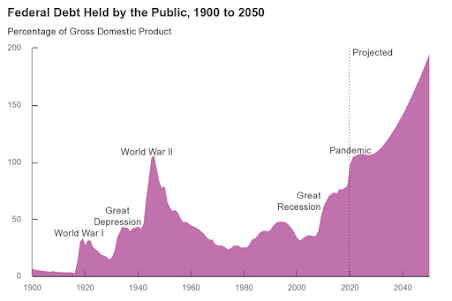 This "baseline" prediction, as it is called, suggests that higher spending will be a main driver of the future deficits. This figure shows projections for future spending and tax revenues. The burst of pandemic-related spending is clearly visible. Looking at 2025, you can see a bump upward in tax revenues when certain tax cuts from the 2107 legislation are projected to expire. But outlays just keep rising. Why? 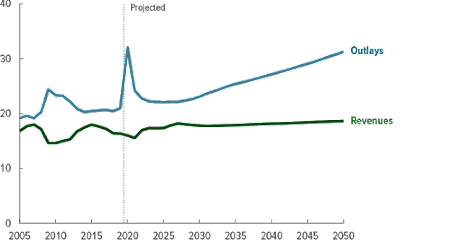 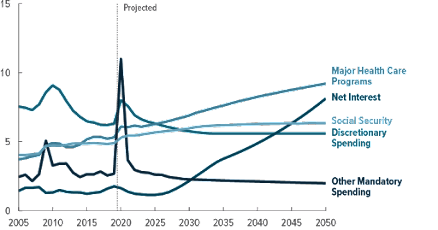 The obvious lesson here, as anyone with a credit card has learned, is that it's important to stay away from that treadmill where debt and interest payments on the debt keep driving each other to new heights. How might that be done?

Part of the issue here is that we have been making a slow-motion decision over time to shift the role of the federal government away from investment and away from national defense, and toward social insurance. It has been obvious for decades now since that surge of birthrates after World War II that we call the "baby boom generation" that spending programs for the elderly like Social Security and Medicare would be expanding in the 2020s. We seem to have a fairly broad social consensus in support of the spending for these programs, but we haven't been able to agree on taxes to finance them. This figures shows the projected rise in these programs over time, how much of it can be attributed to the aging of the population, and for health care programs, how much can be attribute to what seems to be an inexorable rise in health care costs. 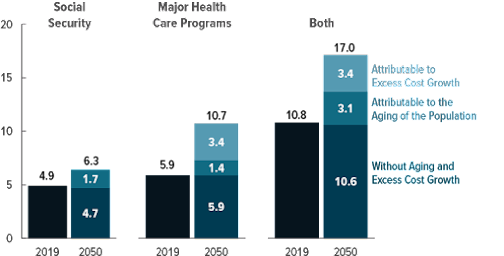 There are a number of possible ways to stay off that interest payments treadmill via higher taxes or lower spending in other areas of the budget. But it's now 10 years since the passage of the Patient Protection and Affordable Care Act of 2010, and based on current campaign advertising by Democrats, it seems clear that it did not succeed either in holding down costs or providing an assurance of health insurance coverage. If a way could be found to hold down that excess growth in health care costs, it would be a big step in reducing the growth of federal debt and staying off the interest rate treademill.
Posted by Timothy Taylor at 3:49 PM