Shifts in How the Fed Perceives the US Economy

For the first time since 2012, the Federal Reserve  has updated its "Statement on Longer-Run Goals and Monetary Policy Strategy," and has produced a useful "Track Changes" version of the alterations. A set of 12 notes and background papers for these changes is available, too. Perhaps the main substantive change is that the specifies that if inflation has run below its 2% annual target rate for a time, it will then expect inflation to run above that 2% rate for a time. Thus, the Fed's 2% annual rate of inflation should not be viewed as an upper bound on the inflation it will allow, but rather as a long-run average. I have nothing against this change, but I strongly suspect that it is not a fix for ails the US economy.
Here, I want to focus instead on a different set of changes that have been happening since 2012: specifically, changes in how the Fed sees the long-run future of the US economy. To put it another way, when short-run fluctuations work themselves out, where is the US economy headed? In his speech describing the Fed's new policy statement, Fed chair Jerome Powell ("New Economic Challenges and the Fed's Monetary Policy Review, August 27, 2020) described how the Fed's view have been shifting toward an expectation of slower long-run growth.
From Powell's speech, Here are some estimates of long-run economic growth from the Federal Open Market Committee (the committee within the Fed that sets monetary policy), as well as the private forecast summarized by the Blue Chip indicators and the Congressional Budget Office. Eight years ago, it was common to think that long-run growth in real US GDP would be about 2.5%; now, the long-run growth rates is more commonly estimated at 1.75%. 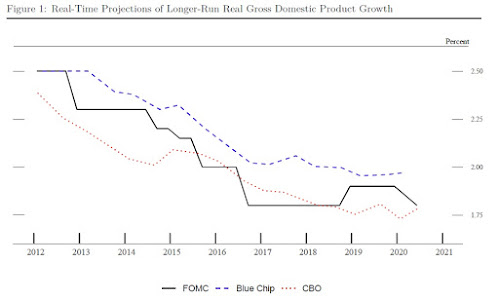 It's worth remembering that these growth rates are annual, and accumulate over time. Thus, a seemingly small difference in growth rates of 0.75%, accumulated over a decade, will mean a GDP that is about 7.5% smaller at that time. In very round numbers, the US GDP would be $2 trillion smaller in a decade as a result of this slower growth rate--which in turn means lower average incomes and less tax revenue for the government.
Another big shift is an expectation of a lower unemployment rate. Back in 2012, the common belief was that the unemployment rate wouldn't fall much lower than 6%; now, the sense is that it will eventually fall to about 4%. 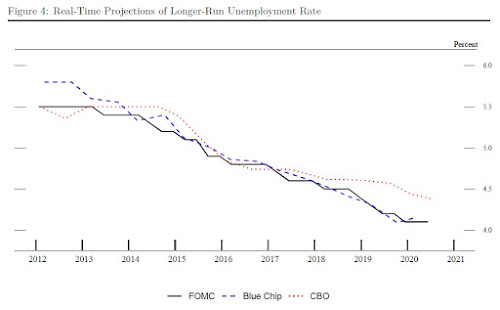 Powell also points out that the Fed believes interest rates have fallen around the world. The Fed calculates a "neutral" interest rate--that is, the interest rate which emerges from supply and demand and isn't either a stimulant or a drag on the economy in the long run. Powell says (footnotes and references to figures omitted):

[T]he general level of interest rates has fallen both here in the United States and around the world. Estimates of the neutral federal funds rate, which is the rate consistent with the economy operating at full strength and with stable inflation, have fallen substantially ... This rate is not affected by monetary policy but instead is driven by fundamental factors in the economy, including demographics and productivity growth—the same factors that drive potential economic growth. The median estimate from FOMC participants of the neutral federal funds rate has fallen by nearly half since early 2012, from 4.25 percent to 2.5 percent.

As Powell points out, the lower interest rate means that the Fed has less power to stimulate the economy by reducing interest rates--because the interest rate is already closer to zero percent. Powell writes: "This decline in assessments of the neutral federal funds rate has profound implications for monetary policy. With interest rates generally running closer to their effective lower bound even in good times, the Fed has less scope to support the economy during an economic downturn by simply cutting the federal funds rate."

In my own view, these changes in beliefs about the long-run direction of the US economy have at least two main implications. One is that a serious economic agenda for the future needs to focus on how to improve productivity and long-run economic growth. Another is that when (not if) the economy goes bad the next time, the Federal Reserve will be in a weakened position to provide assistance, so thinking in advance about what policies could kick in very quickly seems worth consideration.

Posted by Timothy Taylor at 3:34 PM