When Government Debt Explodes in Size, What Options Do Countries Have?

US government debt is exploding in size. The Congressional Budget Office lays out the patterns in "An Update to the Budget Outlook: 2020 to 2030" (September 2020). As usual, the baseline CBO estimates are based on currently existing law--for example, they do not take into account additional debt that would be incurred if one more fiscal stimulus bill was to pass before the election. Thus, the CBO estimates are focused on the large short-term spike in spending has already been legislated. Here's the pattern of total revenues and spending. 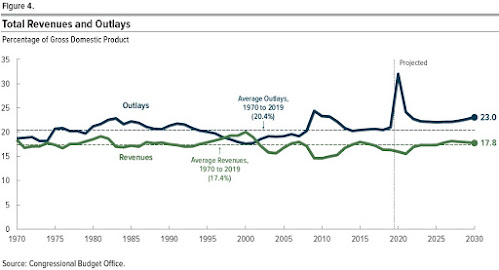 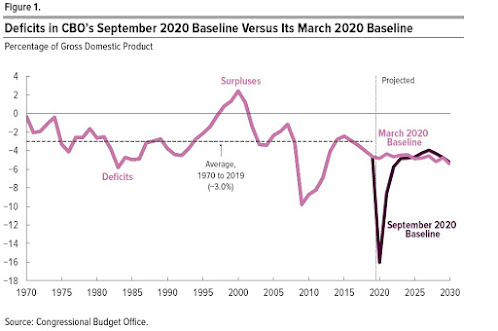 Overall US government borrowing, using the standard metric of total federal debt held by the public, was already on a path to rise sharply in the next decade or so, but the 2020 rise in spending has accelerated that timetable. The highest debt/GDP ratio in US history was previously in 1946, with the spike from the borrowed money used to finance the military efforts of World War II. The US economy is now on track to break through that level in 2023, and then to remain at that higher level of debt. 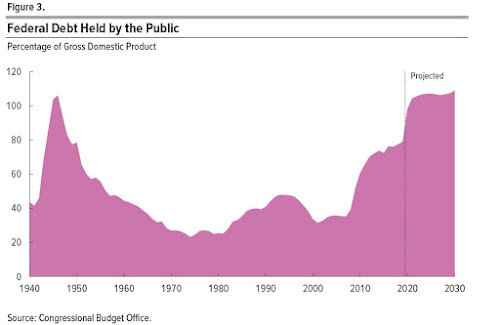 As always, one can question whether the standard measurements given here capture the present moment. For example, the CBO notes that although federal debt held by the public is the standard measure of debt, one can make a case for subtracting out the portion of federal debt that is used to finance student loans: after all, one might think of this as money that is "really" borrowed by students, who are the ones who need to repay it, just using the federal government as a conduit. One might also make a case for not counting federal debt that is purchased and held by the Federal Reserve system, on the grounds that this federal borrowing does not have the same effect on credit markets as if the money was borrowed directly from the public.  For example, from 2019 to 2020 the standard debt/GDP ratio rises from 79.2% to 98.2%. However, if one subtracts out student debt and takes into account that about three-quarters of the federal debt issued in 2020 has been purchased by the Fed, the ratio rises 60.6% of GDP in 2019 to 65% of GDP in 2020. But by any of these measures, there is still a sharp rise in federal deb in the next decade.
What are the risks of this fiscal path and what have other countries done when confronted with historically high and rising debt levels? In a report earlier this year, the CBO listed the main concerns:

If federal debt as a percentage of GDP continues to rise at the pace of CBO’s current-law projections, the economy would be affected in two significant ways: Growth in the nation’s debt would dampen economic output over time, and higher interest costs would increase payments to foreign debt holders and thus reduce the income of U.S. households by rising amounts. ... High and rising federal debt increases the likelihood of a fiscal crisis because it erodes investors’ confidence in the government’s fiscal position and could result in a sharp reduction in their valuation of Treasury securities, which would drive up interest rates on federal debt because investors would demand higher yields to purchase Treasury securities. ... Although no one can predict whether or when a fiscal crisis might occur or how it would unfold, the risk is almost certainly increased by high and rising federal debt. .... In addition, high debt might cause policymakers to feel constrained from implementing deficit-financed fiscal policy to respond to unforeseen events ..."

We are two decades into the twenty-first century, and we have now had two once-in-a-century economic events: the Great Recession of 2007-9 and now the pandemic recession that started in March. Right now, addressing federal debt is far from the main public policy concern. But when that time comes (and it's starting to look more like "when" than "if"), how do countries bring down their debt burden?
Carmen M. Reinhart and M. Belen Sbrancia look at the historical patterns in "The Liquidation of Government Debt" (January 2015, IMF Working Paper WP/15/7). They summarize:

Throughout history, debt/GDP ratios have been reduced by (i) economic growth; (ii) substantive fiscal adjustment/austerity plans; (iii) explicit default or restructuring of private and/or public debt; (iv) a surprise burst in inflation; and (v) a steady dosage of financial repression accompanied by an equally steady dosage of inflation.

This post is not the place to discuss these choices in any detail. But just to state the obvious, the US economy has not been more prone to slow productivity than to periods of rapid economic growth in recent decades; the US political system has been unwilling to restructure big spending programs like Medicare and Social Security; a large-scale restructuring or default on US debt seems like a highly unlikely last resort; and US inflation has been stuck at low levels for 25 years now, for reasons not fully understood. Thus, I suspect the US economy may be headed, by fits and starts, to a period of what Reinhart and Sbrancia call "financial repression." By this term, they mean a set of policies that invole much greater government management of the financial sector, including policies that  focus on keeping interest rates very low and also limit other options available to investors--so that the government will find it easier to keep borrowing at low interest rates.
Posted by Timothy Taylor at 1:54 PM