Federal Debt in a Time of Pandemic

In the midst of 1,001 ways that the government could increase spending or reduce taxes to blunt the immediate economic effect of the coronavirus pandemic, spare a moment for the existing level and trend of federal debt. The Congressional Budget Office has issued "Federal Debt:A Primer" (March 2020). 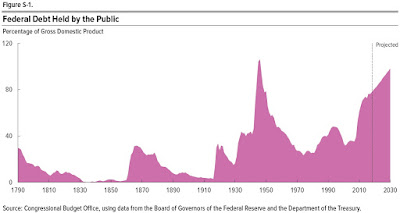 The historical spikes in the debt/GDP ratio are named easily enough. You can point out the rising levels of debt for the Revolutionary War, the Civil War, World War I, the Great Depression, World War II, the tax cuts and defense build-up of the 1980s, and the Great Recession. The current debt/GDP ratio is second-highest in US history, and trending toward highest.

Much of the report focuses on the specific financial instruments that the Treasury uses to borrow:  short-term Treasury "bills" that are repaid in periods from one month up to one year; Treasury "notes" that are repaid over periods from two to 10 years; long-term Treasury "bond" repaid over 30 years; Treasury Inflation-Protected Securities (TIPS) where the principal value of the borrowing is adjusted for inflation twice a year; and Floating Rate Notes (FRNs) where the interest rate adjusts up and down based on the interest rate for 13-week Treasury bills. The report notes:

Offerings that best meet investors’ needs typically will lower the Treasury’s overall cost of borrowing. Short-term instruments generally have lower interest costs, but they expose the government to the risk of paying higher interest rates when it refinances the issues. Conversely, long-term securities typically involve higher rates but provide more certainty about the future costs of interest payments because they require less frequent financing.

Putting all of these together, the average time to maturity for federal borrowing hasn't changed much in the last two decades: as the figure shows, it got a little shorter during the Great Recession, but now it's back to roughly the same level as 2001. 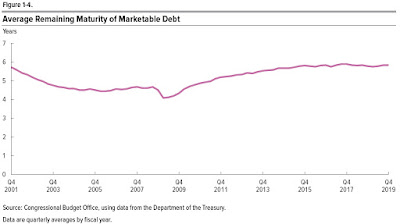 How much of the Treasury borrowing has come from domestic sources and how much from foreign sources? About half comes from abroad, much of that from China and Japan.

One interesting point I had not considered before is the how higher student debt has played a role in raising federal debt. The CBO explains:

The CBO report is focused on laying out trends and patterns, not on ringing the gong about possible dangers. However, there's a brief discussion of risks and effects at the end of the report.

1) "If federal debt as a percentage of GDP continues to rise at the pace of CBO’s current-law projections, the economy would be affected in two significant ways: Growth in the nation’s debt would dampen economic output over time, and higher interest costs would increase payments to foreign debt holders and thus reduce the income of U.S. households by rising amounts."

2) "The increases in debt that CBO projects would also pose significant risks to the fiscal and economic outlook, although those risks are not currently apparent in financial markets. ... High and rising federal debt increases the likelihood of a fiscal crisis because it erodes investors’ confidence in the government’s fiscal position and could result in a sharp reduction in their valuation of Treasury
securities, which would drive up interest rates on federal debt because investors would demand higher yields to purchase Treasury securities. However, the debt-to-GDP ratio has no identifiable tipping point because the risk of a crisis is influenced by other factors, including the long-term budget outlook, near-term borrowing needs, and the health of the economy. Moreover, because the United States currently benefits from the dollar’s position as the world’s reserve currency and because the federal government borrows in dollars, a financial crisis—similar to those that befell Argentina, Greece, or Ireland—is less likely in the United States. Although no one can predict whether or when a fiscal crisis might occur or how it would unfold, the risk is almost certainly increased by high and rising federal debt."

3) "Not all effects of the projected path of debt are negative, however. In addition to allowing policymakers to maintain current-law spending and revenue policies, that path would cause underlying interest rates to be higher than they otherwise would be, giving the Federal Reserve more flexibility in implementing monetary policy."

4) At the current moment, I'd emphasize one other reason mentioned briefly: "In addition, high debt might cause policymakers to feel constrained from implementing deficit-financed fiscal policy to respond to unforeseen events ..."  The enormous and fundamentally healthy US economy can take on more debt in response to the coronavirus. But it's just a fact that if you have already loaded up on borrowing, and your future tax and spending plans already have you locked into pattern of additional borrowing, then your flexibility is lower. The idea of taking steps to hold down the rise in federal borrowing is never going to be  popular. It feels as if it's all discipline and no benefit--right up to when a situation arises when you would like to be able to borrow with confidence in an unconstrained way to meet the challenge of a pandemic.
Posted by Timothy Taylor at 12:48 PM