Winning the "War on Poverty"--And Now What?

President Lyndon Johnson declared "war on poverty" during his State of the Union address on January 8, 1964. But the official poverty rate has remained disturbingly high. Here are figures showing the total number of people below the US poverty line and the poverty rate from the US Census Bureau: 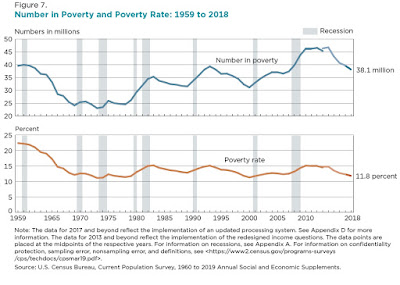 It's mildly amusing to watch responses to these patterns from across the political spectrum. For example, liberals often are quick to embrace the basic interpretation of these figures--that poverty remains an enormous and unsolved social problem--but don't much like the implication that US programs to reduce poverty have been pretty ineffective over the decades. On the other side, conservatives are quicker to embrace the implication that US anti-poverty programs haven't worked well, but are less comfortable with accepting the idea that poverty remains as big a social problem as it was 50 years ago.

Of course, one can also argue that the official measure of poverty is misleading for various well-known reasons. For example, the official poverty measure is based on before-tax income received, and thus does not take into account how the poor might benefit from non-cash programs like Medicaid or food stamps, or from poverty benefits that involve reducing taxes or providing refundable tax credits. Another issues is that the official poverty lines (which vary according to number of people in a household) are increased each year according to the level of inflation as measured by the Consumer Price Index--but is that the most appropriate adjustment? Another more subtle issue is whether poverty should be measured across a "family," which refers to people who are related by marriage or parent-child status, or or whether it should be measured across a "household," which includes all of those living together at a certain address.

Richard V. Burkhauser, Kevin Corinth, James Elwell, and Jeff Larrimore recalculate what the official poverty rates would look like with an alternative set of adjustments for these factors in "Evaluating the Success of President Johnson’s War on Poverty: Revisiting the Historical Record Using a Full-Income Poverty Measure"  (December 2019, IZA DP No. 12855). Here's how the patterns change: 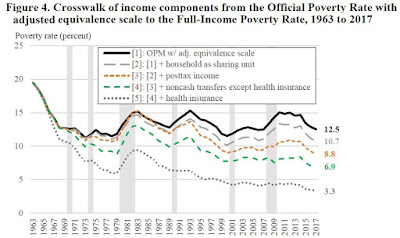 An additional step is to think about the appropriate level of inflation to use over time. The official poverty rate uses the Consumer Price Index. But one interesting fact about the CPI is that after it is calculated, it is never revised--not even when the US Bureau of Labor Statistics later makes changes in the technical formulas used to adjust the CPI. Because various contracts and laws depend on the CPI, this lack of adjustment makes some sense. But if you want to know how the poverty rate should have been adjusted over time, it makes sense to use the most current methods for calculating inflation. One prominent measure of buying power that is adjusted over time is called the Personal Consumption Expenditures price index. There is also a Consumer Price Index "Research Series" that uses modern methods to calculate what the CPI would have been in the past. The authors write:


Compared to 1963 thresholds, in 2017 the CPI-U used by the Official Poverty Measure generates a threshold that is 8.0 times as high in nominal dollars to hold the real value of the thresholds constant. To the degree that this is an overstatement of inflation, it will effectively raise the real level of these poverty thresholds and exaggerate the share of people in poverty in 2017 relative to 1963. In contrast, all of the other measures of inflation shown result in smaller changes in nominal thresholds. In particular, the PCE—which we use for the Full-income Poverty Measure—generates nominal thresholds in 2017 that are 22 percent below the thresholds using the Official Poverty Measure’s CPI-U, whereas using the Meyer-Sullivan adjusted CPI-U-RS would generate thresholds that are 46 percent below that using the CPI-U.

Adding this different measure of inflation, the preferred "full-income poverty rate" for these authors looks like this: 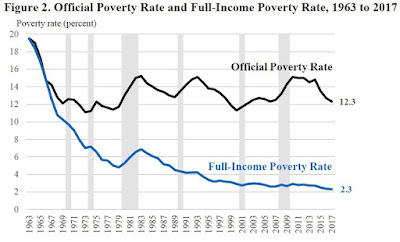 Clearly, one's beliefs about whether the "War on Poverty" was a success depends the extent to which these kinds of changes seem reasonable to you.  It's also worth remembering that attempts to measure the number of people in poverty using consumption data, rather than income data, also show a dramatic fall in the poverty rate.

Of course, while it might seem that evidence suggesting that that US poverty level is actually far below the official rate is good news (to the extent that it is true), nothing is simple in a politically polarized world. Conservatives would have to accept that a number of government programs have had a dramatic effect in successfully reducing poverty rates. Liberals would have to accept that poverty is now a much smaller problem than several decades ago.

A deeper problem here is that "poverty" is a judgement that always applies in the context of a specific place and time. US poverty isn't the same as what it means to be in poverty in Brazil or Nigeria or India. US poverty in 2020 isn't the same as what meant to be in "poverty" in the US in 1964 or in 1920 or in 1820. Burkhauser, Corinth, Elwell, and Larrimore suggest this conclusion (citations and footnotes omitted):


President Johnson’s War on Poverty—based on economic standards when he declared that war—is largely over and a success. ... Nonetheless, societal views on poverty evolve over time. In 1971, Robert Lampman observed that “by present-day American standards most of the several billion people who have ever lived, and most of the three billion people alive today, were or are poor”. He also suggested that the goal of eliminating poverty based on these initial standards “should be achieved before 1980, at which time the next generation will have to set new economic and societal goals, perhaps including a new distributional goal for themselves”... Nevertheless, the dramatic reduction in poverty by 2017 based on President Johnson’s standards suggests that policymakers might consider setting new poverty thresholds that reflect modern-day expectations for what it means to be impoverished.

For a sense of what poverty meant back practical terms in the late 1950 and early 1960s--in terms of malnutrition, poor health, and lack of education--a readable starting is Michael Harrington's 1962 book: The Other America: Poverty in the United States. My own sense is that what one might call "consumption poverty" has dramatically decreased in the last 50-60 years, both because of government programs like Medicaid and food stamps and also because of how technologies from the microwave to the smartphone have become widespread even among those with lower incomes.  However, what one might call "opportunity poverty"--those who reach their late teens and early 20s with considerably less preparation to take participate in what 21st century America has to offer--remains a severe and ongoing issue.
Posted by Timothy Taylor at 10:35 AM