Women in Economics: The Early-Stage Problem

The share of women has risen substantially in many academic areas, but less so in economics. Shelly Lundberg has edited a VoxEU.org e-book on Women in Economics (March 2020, free registration required). It includes an introduction and 18 short and readable essays, many of which summarize and refer to research presented in more detail elsewhere. Thus, it's a good way to get up to speed on thinking in this area. Here, I'll point to what seems to me an underemphasized topic in this research, which comes out of what is sometimes called a "pipeline" approach.

The basic idea here is that there is a pipeline to becoming a tenured professor of economics. It commonly starts with taking economics in college, doing an undergraduate major in economics, entering an economics PhD program, completing a PhD, getting a job as an assistant professor, and then being promoted to full professor. One can look at the share of women at each stage of the process and get a sense of where the representation of women is falling behind.

Here's a figure from "Women in Economics: Stalled Progress," by Shelly Lundberg and Jenna Stearns. The line that is highest in the top right corner shows the share of women among senior economics majors: it's been in the range of 30-35% for the last 20 years. 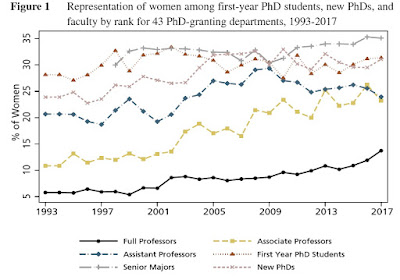 Much of this book focuses on analysis and proposals for addressing the later steps in the career pipeline to becoming an economics professor Here are a few examples, as Lundberg summarizes them in her overview essay:

There are also some findings that may run against common intuitions. For example, a common proposal is to make allowances for having children, so that the economists who are parents of children get an extra year or two to publish papers before a decision is made on tenure. However, the evidence on these policies is that they help male economists and disadvantage women. Lundberg explains:

"In American universities, the fixed-length tenure clock period has been a notable hurdle for assistant professor parents trying to build a tenurable research record, despite a temporary decline in productivity after childbirth. Some universities have introduced policies that stop the tenure clock for mothers, but more have adopted gender-neutral policies that give all new parents an extra year before their tenure decision. Heather Antecol, Kelly Bedard, and Jenna Stearns examine the impact of the rollout of these policies at top-50 US economics departments between 1980 and 2005, and find that men are 17 percentage points more likely to get tenure at their first job after this policy is adopted, while women are 19 percentage points less likely to do so. Men who gain more pre-tenure time as a result of this policy are more likely to publish an additional article in a top journal but women, who appear to bear more of the costs of a new child, do not."

However, the alert reader will notice that the studies I have mentioned all focus on what happens after people have already become professors--not earlier in the pipeline. In addition, the share of women among senior economics majors and among PhD students of economics has been pretty much flat for for the last decade or so. If there isn't a major adjustment at the front end of the pipeline, the share of women who become full professors of economics will necessarily be limited.

The evidence on how to boost the number of women who become undergraduate economics majors is thin, at least so far. As Lundberg writes:

Tatyana Avilova and Claudia Goldin tell the story of the Undergraduate Women in Economics (UWE) Challenge, which they have led since 2015. Economics departments were recruited into the programme, randomised into treatment and control groups, and treatment institutions received funding and guidance to initiate interventions to increase the number of female economics majors. These interventions fell into one or more of three groups: (1) providing students with better information about what economists do, (2) providing mentoring and role models and creating networks among students, and (3) improving the content and relevance of introductory economics courses.

Final data on results from UWE projects are not yet available, but one successful intervention that was administered as a field experiment is described in the next chapter by Catherine Porter and Danila Serra. Lack of female role models is often noted as a barrier to women choosing economics as an undergraduate major. The authors implemented a relatively inexpensive intervention in randomly-chosen Principles of Economics classes. Successful and ‘charismatic’ alumnae of the programme were chosen with the help of current undergraduates to visit classes briefly and discuss their educational experiences and career paths. The results were dramatic: role model visits increased the probability that treated female students would major in economics by eight percentage points (from a base of 9%) with no impact on male majors. This provides strong evidence of the salience of role models for women’s choice of major.

In addition, many students even before arriving at college have a sense some majors where they are potentially interested and some majors they want to avoid. When I looked at at who takes AP microeconomics and macroeconomics exams a couple of years ago, I found that the number of males who get a 4 or 5 on these examples was much higher than the number of females, which probably leads more men to think about taking economics courses in college. Here's a comment from Kasey Buckles in an article in the Winter 2019 issue of the Journal of Economic Perspectives:


However, a serious discussion of strategies for closing the gender gap in economics must also include a look at the pipeline’s source—the K-12 level. Large gender gaps in college major intentions among incoming students suggest that many women are being discouraged from studying economics before they ever enter a Principles classroom (Goldin 2015). Avilova and Goldin (2018) offer an explanation: “Students often think that economics is only for those who want to work in the financial and corporate sectors and do not realize that economics is also for those with intellectual, policy and career interests in a wide range of fields” (p. 1). If women are less interested in finance and business (putting aside how those preferences are formed), then we could be losing many potential economists right out of the gate as a result of this misperception. ... [I]t is unlikely that economists will make substantial and lasting progress toward gender balance if we ignore the K-12 experience. More innovation and research is needed on this front ..."

My own nagging sense, based on a stream of anecdotes and personal experiences rather than hard evidence, is that the fundamental presentation of what the subject of economics is all about is, on average, less attractive to young women than to young men. I also think the way in which economics is first presented often doesn't give much sense of the breadth and richness of the topics that economists actually study.


It seems reasonable to say that this book uses the "Symposium on Women in Economics" in the Winter 2019 issue of the Journal of Economic Perspectives as a launching pad. The three papers in that symposium, which are also all represented in this book, include:

Some other writing potentially of interest on this subject includes:

Posted by Timothy Taylor at 1:31 PM