Unemployment: Transition Patterns In and Out

The monthly US unemployment rate has been 4.0% or lower since March 2018. The idea that the US could sustain a level of unemployment this low was unexpected by mainstream economic forecasters. 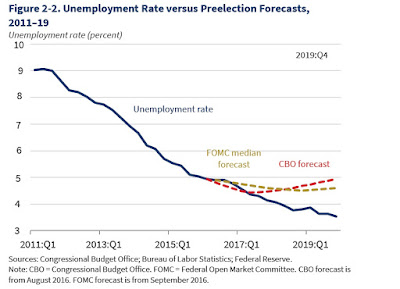 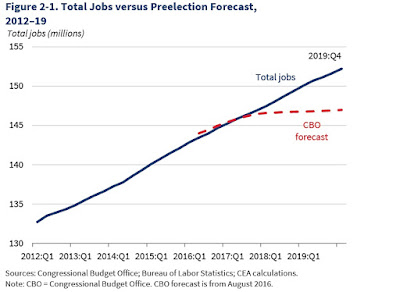 Of course, Trumpophiles will credit this change to Trump administration policies, while the Trumpophobic will emphasize that the momentum toward lower unemployment rates and more jobs seems to have continued more-or-less uninterrupted from the pre-Trump years. Here, I want to sidestep the question of credit, and focus more tightly on what is actually going on behind these numbers.

An unemployed person can leave unemployment in two ways: either by getting a job, or by leavint the labor force so that they are no longer looking for a job. Similarly, person can enter unemployment in two way: either by losing a job and looking for a new one, or by re-entering the labor force and deciding to start looking for a job but not finding one right away. So, is the unemployment rate low because lower numbers of people are transitioning in, or because higher number are transitioning out, or some of both?  Marianna Kudlyak and Mitchell G. Ochse look at how the patterns of these transitions have evolved over time in "Why Is Unemployment Currently So Low?" (Economic Letter, Federal Reserve Bank of San Francisco, March 2, 2020).

What are the underlying reasons why transitions into unemployment may be lower now than in the past? Kudlyak and Ochse don't analyze this issue explicitly, but they highlight two possibilities: an aging workforce and better job matches. The intuition is that an aging workforce (along with a lower rate of start-up firms) means that people are more likely to remain in a current job, and only to move if they have the new job already lined up. The argument for better job matches is that employers have developed better tools for evaluating whether employees are a good fit--in terms of skills, personality, cognitive ability, and more--and so those who get hired into a job will on average stay longer. In other words, when the Fed and the CBO were incorrect in their forecasts of where the unemployment rate was headed, these factors were the ones they had not not taken into account.