The number of Americans who move in a given year has been declining. Here's an illustrative figure from the Economic Report of the President (February 2020, White House Council of Economic Advisers): 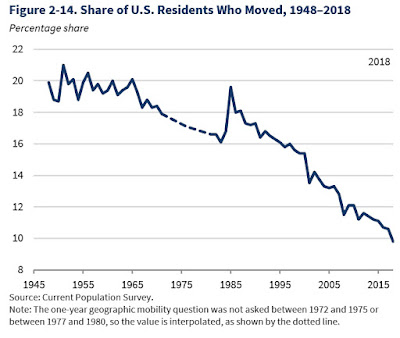 The reasons for this decline, and what (if anything) should be done about it have been murky. Kyle Mangum offers an historical interpretation of the change in "No More Californias: As American mobility declines, some wonder if we've lost our pioneer spirit. A closer look at the data suggests that the situation is less dire—and more complicated—than it at first appears" (Economic Insights, Federal Reserve Bank of Philadelphia, Winter 2020, pp. 8-13). He describes the potential economic problems resulting from lower mobility in this way:


Economists widely view labor mobility as the principal mechanism by which regions adjust to local economic shocks. If local industries fall on hard times, workers can leave; in places where labor demand is high, new residents flow in. The decline has therefore generated concern that the economy is less adaptable to local shocks, ultimately resulting in labor misallocation, unrealized output, and lower productivity.


Some of the seemingly plausible explanations for the lower decline don't hold up under closer examination. For example, one might hypothesize that the decline in movlity is caused because older people are less likely to move long distances and the US population is aging. But as Mangum points out (footnotes omitted):


Researchers have shown that typical aging differences are not quantitatively big enough to generate the observed national decline. Perhaps more importantly, the decline is present within age groups, so that young people today, for instance, are also moving less than their parents did at the same age. Moreover, aging has occurred at similar rates across cities, so there is no scope for aging to explain the spatial differences in the decline.

Instead, Mangum offers an interpretation of declining geographic mobility in the last few decades based in long-term US history. Here's a map from the US Census Bureau showing the movement of the location of the average center of US population from 1790-2010:

Mangum offers a table showing  how much the center of population moved during each decade. 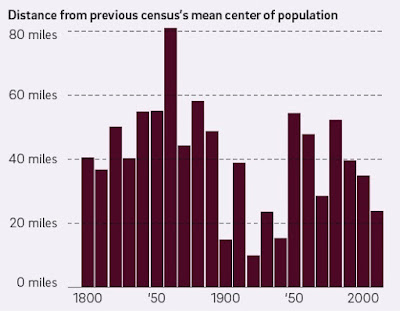 The basic patterns here  will make sense to those with even a basic familiarity of US history. The US has had a general movement of population to the west and south. For an illustration of the process, the US Census Bureau has a map which shows the movement of the American "frontier" from 1790 to 1890. In 1890, the Census Bureau famously announced what has been known as the "closing of the western frontier": " In 1890, the Superintendent of the Census described the western part of the country as having so many pockets of settled area that a frontier line could no longer be said to exist."

Mangum suggests that the motivations to move have diminished in modern America.

[T]here is reason to expect that massive population changes across regions—of the degree seen from colonization to westward expansion—will no longer be business as usual. The major differences in regional habitability have diminished. Transportation has crisscrossed the continent, water delivery- and-control infrastructure has been put in place, and air conditioning is ubiquitous. Technologies today focus on speed and efficiency within cities, not on developing new cities. And in the digital age, new technologies are less spatial. Population growth today is more balanced across locations compared to the skewness of the early and middle 20th century. ... And this population growth is occurring more within regions than across regions. To the extent that imbalances exist, growing places are established cities rising in the urban hierarchy, leaving the rest of their home region behind and largely drawing people from within their region. ...

So perhaps the U.S. is finally in a “long-run spatial equilibrium,” as some have suggested. The term suggests that households  incentives to relocate have diminished, either because places are more similar than they used to be, or structural changes in the economy have caused real estate and labor prices to rationalize spatial differences, so that, in either case, relative population adjustments across space are no longer necessary.

Mangum also refers to the extent of "home attachment," in which "[p]eople living near their birthplace show a strong proclivity to remain in their location compared with people born out of state. A transplanted population, by contrast, is more transient and more subject to various idiosyncratic changes in circumstance. For example, if someone moved to a new place for a job, and the job dissolves for whatever reason, they are likely to move away. Someone with strong local ties whose job dissolves is more inclined to search locally."

Thus, when Americans were first moving in substantial numbers to the south and west, the recent arrivals were still somewhat transient. If for some reasons their first move didn't work out, they would move again. But over time, more and more people identify as being from places in the south and west, and with this added "home attachment" become less likely to move again.

The historical shift that Mangum describes seems plausible to me (although I'd be interested in seeing a parameterized model showing that a connection from greater home attachment to less moving can explain the overall observed patterns). But (as Mangum points out), there are two ways to interpret the fact that many of those who live in struggling labor markets in higher-unemployment cities have been unlikely to move. One interpretation is that they have strong "home attachment." The alternative interpretation is that moving from slower-growth to higher-growth urban areas has become  more difficult and risky than it used to be, in substantial part because housing costs have become so high in high-growth urban areas. A chicken-and-egg problem emerges for someone thinking about such a move: they can't afford the high housing costs in the new city unless they already have a job lined up, and they can't line up a job unless they first move to the new city. There are a variety of other possible barriers to moving, as well, including rules for occupational licensing that differ across states, a lack of investment in the public transit systems that are more heavily used by those with lower incomes, and so on.

In this interpretation,  some of the decline in US geographic mobility may be that we have "no more Californias." But part of the mobility decline may also be that state and local policies that affect housing, jobs, and transportation are discouraging a number of potentially willing movers.

Here are some previous posts and writings on the decline of US geographic mobility.