Some Ruminations from Mars on Organizations and Informal Jobs

In high-income developed economies like the United States, we tend to take for granted that a large share of economic activity is organized within companies, and that these companies will hire workers and then organize and direct their efforts. However, in lower-income countries the notion of employment through firms cannot be taken for granted--as shown by a lack of "formal" jobs in those economies. .

For an extremely high-level view of the importance of business organizations--indeed, a view from Mars--a passage from Herbert A. Simon (Nobel '78) about two decades ago in an article he wrote for the Journal of Economic Perspectives ("Organizations and Markets, Spring 1991, pp. 25-44). Simon wrote:


A large part of the behavior of the system now takes place inside the skins of firms, and does not consist just of market exchanges. Counted by the head, most of the actors in a modern economy are employees, who either do not spend their days in trading, or if they do (for example, if they are salesmen or purchasing agents) are assumed to trade as agents of the firm rather than in their own interest, which might be quite different. ...

A mythical visitor from Mars, not having been apprised of the centrality of markets and contracts, might find the new institutional economics rather astonishing. Suppose that it (the visitor—I'll avoid the question of its sex) approaches the Earth from space, equipped with a telescope that reveals social structures. The firms reveal themselves, say, as solid green areas with faint interior contours marking out divisions and departments. Market transactions show as red lines connecting firms, forming a network in the spaces between them. Within firms (and perhaps even between them) the approaching visitor also sees pale blue lines, the lines of authority connecting bosses with various levels of workers. As our visitor looked more carefully at the scene beneath, it might see one of the green masses divide, as a firm divested itself of one of its divisions. Or it might see one green object gobble up another. At this distance, the departing golden parachutes would probably not be visible.

No matter whether our visitor approached the United States or the Soviet Union, urban China or the European Community, the greater part of the space below it would be within the green areas, for almost all of the inhabitants would be employees, hence inside the firm boundaries. Organizations would be the dominant feature of the landscape. A message sent back home, describing the scene, would speak of "large green areas interconnected by red lines." It would not likely speak of "a network of red lines connecting green spots."

Of course, if the vehicle hovered over central Africa, or the more rural portions of China or India, the green areas would be much smaller, and there would be large spaces inhabited by the little black dots we know as families and villages. But the red lines would be fainter and sparser in this case, too, because the black dots would be close to self-sufficiency, and only partially immersed in markets. But let us, for the present, restrict our attention to the landscape of the developed economies.

When our visitor came to know that the green masses were organizations and the red lines connecting them were market transactions, it might be surprised to hear the structure called a market economy. "Wouldn't 'organizational economy' be the more appropriate term?" it might ask. The choice of name may matter a great deal. The name can affect the order in which we describe its institutions, and the order of description can affect the theory.

In low-income countries, as Simon pointed out, the "green areas" of business organizations are far less prominent. As a result, jobs are more likely to be "informal," in the sense that they are people working on their own or as part of their own family, without regular wages. Here's are some columns from a table from the World Employmentand Social Outlook: Trends 2020 published by the International Labour Organization in January 2020. As the report points out, around the world about 60% of workers have informal jobs; in low-income countries, it's more like 90% (first column) Conversely, it's not a coincidence that in low income countries less than 20% of workers have jobs with wages and salaries (second column). 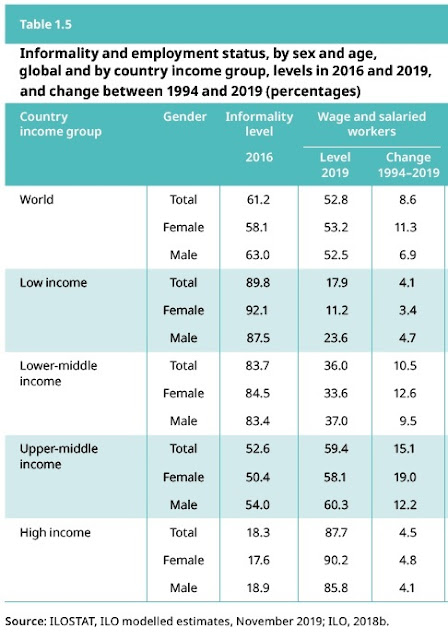 The ILO discusses these patterns in a section on "Paid work and the problem of decent work." Indeed, a main distinction in lower-income countries between the poor and the middle class in those countries is that the middle class are far more likely to have a formal job that pays a regular wage or salary.

When thinking about Simon's "green areas," there's no need to to the rhetorical extreme of extremes of Nicholas Murray Butler, president of Columbia University, who said in a 1911 speech: "The limited liability corporation is the greatest single discovery of modern times." But it's worth pointing out that a lot of public commentary is a more than a little schizophrenic about the social value of the "green areas." There is often strong criticism that the green areas are following their own logic and goals, which in a number of contexts (pollution is a leading example, direct assistance to the poor is another), may not line up with broader social goals.

Amidst the criticism, one can lose track of the reality that the green areas are the way that advanced economies around the world provide desired and secure jobs for their populations. The green areas are also a major social mechanism for organizing production and pursuing innovation. Indeed, many of the concerns about workers in the "gig economy" in high-income countries are about how workers may suffer if they don't have a well-defined and ongoing connection to a green area.

In lower-income countries, one of the major social challenges is how to generate decent jobs for growing populations (for discussion, see here , here, here). For these countries, providing the legal, social, and financial conditions where Simon's green areas can develop and sustain themselves--thus providing a foundation for secure jobs and future growth--is an important policy goal. Indeed, it seems to me that in many settings the arguments that favor free markets or express concern about free markets are not actually about "markets" per se: instead, they are about decisions being made inside the green areas and how to define the rules and responsibilities that should govern those decisions.
Posted by Timothy Taylor at 9:33 AM