When a timetable for putting the euro in place was annouced by the Delors Commission back in 1988, I didn't believe it would ever happen. Germany was going to give up the deutsche mark? Really? Europe was already reaping gains from a more-free flow of goods, services, labor, and capital across borders, as well as from economic cooperation in other areas. Would a single currency increase those economic gains by much? Of course, the euro somehow managed to disregard my personal doubts and proceed to be implemented on schedule. But as the euro-zone has done a zombie stagger for the last few years, I've been feeling more vindicated in my earlier doubts. The most recent Summer 2013 issue of the Journal of Economic Perspectives contains four articles putting what has happened in the euro-zone in perspective. (Courtesy of the American Economic Association, all articles in the JEP are freely available on-line going back to the first issue in 1987. Full disclosure: I am predisposed to think that JEP articles are worth reading because I've been the managing editor since 1987.) Here's my own narrative of what has happened with the euro, drawing on those articles.

To set the stage for what needs explaining here, consider some patterns of unemployment. When the euro went into full effect early in 2002, unemployment dropped across the euro zone, but since early in 2008 it has been on the rise, now at about 12%. Notice that unemployment in the euro-zone, shown by the light line, has been higher and has risen faster than unemployment for the euro area as a whole. 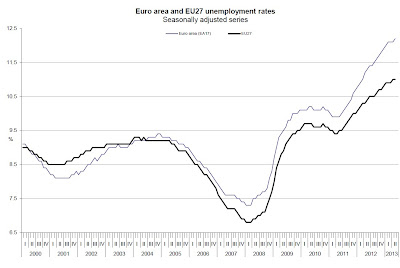 Moreover, if one goes beyond the overall euro-average and looks at specific countries, the unemployment rates become even more disturbing. Unemployment in Greece and Spain, the two countries to the far right of the graph, are agonizingly high at above 26%. 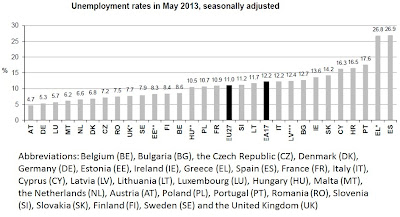 So what explains the pattern of unemployment first falling when the euro came into effect in 200s, and then 2002, and then rising?  In their JEP paper, Jesús Fernández-Villaverde,  Luis Garicano, and Tano Santos offer a couple of striking graphs looking at borrowing patterns. Before the euro, countries in the periphery of Europe like Greece, Spain, Ireland, and Portugal had to pay higher interest rates than Germany. But with the advent of the euro, international capital lender  apparently decided that all countries borrowing in euros posed the same risk, and interest rates across these countries converged. 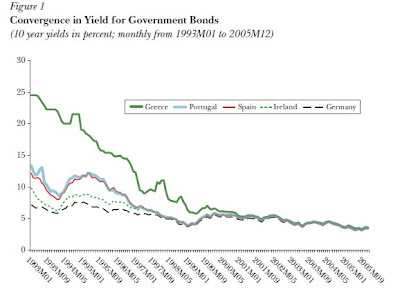 As the countries of the periphery experienced this sharp drop in interest rates, they went on something of a borrowing binge. In Greece and Portugal, the binge involved large government deficits. In Ireland and Spain, it involved large borrowing to finance an unsustainable housing bubble. But in all of these countries, their indebtedness to foreign investment rose dramatically. Meanwhile, much of this inflow of foriegn investment was coming from Germany, where foreign assets were piling up. 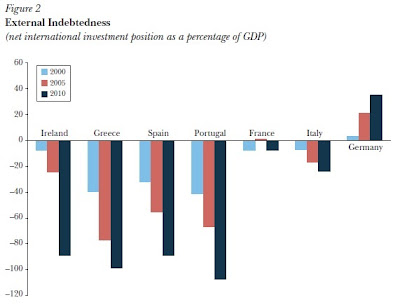 The rise in borrowing in the periphery countries was unsustainable, and the rubber hit the road when the recession hit in 2008. These economies had been living high on inflows of international capital. Average wages had risen substantially for workers. Governments had made lots of promises about spending for pensions and other areas. One hope of the euro had been that it would force countries on the periphery of Europe to run more sensible macroeconomic policies: after all, the plan was that they would hand over their central banking to the professionals at the European Central Bank, and various euro-wide rules would limit government borrowing. But instead, countries on the periphery of Europe were deluged with easy money in the form of unsustainable inflows of foreign capital. Now, those explicit and implicit promises of prosperity have fallen apart.

The current hope is that it may be possible to cobble together some set of arrangements that can sustain the euro. For example, there is talk of a unified banking system across Europe, with common deposit insurance, bank regulation, and rules for closing down insolvent banks. There is talk of swapping some of the debt of countries for debt that would be repaid by the euro area as a whole, to avoid the "sovereign-debt doom loop"  that arises when banks in a country mainly own the government debt of that country. In that situation, problems of bank bailouts turn into large increases in government debt (as in Ireland) and problems of government debt turn into sick banks--which in turn makes the economy worse. In their JEP article, Stephanie Schmitt-Grohé and Martin Uribe discuss how price inflation of perhaps 20%, spread over 4-5 years, could serve to reduce real wages in the countries with high unemployment and thus make them economically more competitive. There are even whispers of a hint of a shadow of a possibility of steps like a shared unemployment insurance fund across Europe.

But while I'm sure it's possible to cobble together a series of bailouts and steps like these to keep the euro going awhile longer, the economic case that the euro may not be able to function very well remains.  The economic case against the euro is based on the "optimal currency area" literature associated with the work of Robert Mundell back in the 1960s.  (Mundell won the Nobel prize in 1999, and their website has a nice overview of his main contributions here.)

To understand the guts of the argument, consider a situation where one region of the U.S. economy performs well with rapid productivity and output growth, while another region does not. What happens? Well, substantial numbers of people migrate from the area with fewer jobs to the area with more jobs. Prices of nontraded goods like land and housing adjust, so that they are cheaper in the area that is performing less well and more expensive in the area that is performing better. Eventually, firms will see potential profits in these lower-cost areas and expand there. The U.S. tax code and spending programs reallocate some resources, too, because a progressive tax code will collect a greater share of the rising income in the area that is relatively better off, while a range of safety net programs and other spending will tend to favor the area that is relatively worse off. In short, when the modern U.S. economy has a situation where growth differs across regions, those differences are ameliorated to some extent by other economic shifts and policy choices. With these preconditions in place, a single currency works fairly well across the U.S. economy.

But what would happen if the two areas of the U.S. were not connected in these ways? What if one area performed well, another performed poorly, but there was very little movement of people, relatively little adjustment of wages and prices, no central government cushioning the differences of regional performance, and no eventual movement of business to the lower-cost region. In this case, the low-performance economic region could remain a depressed regional economy with high unemployment for a long, long time. In this situation, without the other offsetting economic changes, it would be useful for the two areas to have different currencies. Then the currency of the low-performance area could depreciate, which would make its workers and goods more attractive, and help the region to climb out of its slump.

When you look at Germany and Greece, you don't see tens of thousands of Greek workers heading to Germany for jobs. You don't see German firms setting up shop in Greece to take advantage of lower-priced land and labor. The European Union government has quite a small budget relative to national economies, and does very little to offset cross-country economic differences. Back before the euro, when areas of Europe differed in their economic performance, adjustments in the exchange rate--which in effect change the prices of all labor and goods from that economy on world markets--could ease the adjustment process. But for countries in the euro-zone, adjusting the exchange rate is no longer possible, and the other possible economic adjustments are not very strong.

In this situation, the economic outcome is sometimes called an "internal devaluation." When countries like Greece, Spain, Portugal, and Ireland on the periphery of Europe can't cut their exchange rate and can't adjust in other ways, all that's left is the prospect of a long, miserable period where unemployment stays high and wages remain stagnant. In reviewing these kinds of economic dynamics, Kevin H. O'Rourke and Alan M. Taylor write in their JEP article:

"So where the eurozone needs to go in the long run, we argue, is towards a genuine banking union; a eurozone-wide safe bond to break the sovereign-bank doom loop; a central bank that is more flfl exible and willing to act as a true lender of last resort against such bonds and other assets as necessary; and a fiscal union at least sufficient to support the above. But the short-run problems facing countries in the periphery of Europe are now so great that politicians may never get a chance to solve these long-run problems because the eurozone may well have collapsed in the
meantime."

The ultimate question here, perhaps, involves the desired destination of the euro-zone. In his article in the JEP symposium, Enrico Spolaore looks at the arguments of the "intergovernmentalists," who see European integration as a process in which national governments look to cooperate for mutual benefit, while remaining ultimately in charge, and the "functionalists," who see European integration as a long march toward a United States of Europe. Many Europeans seem to ambiguous on this choice, sometimes leaning one way, sometimes the other. As Spolaore writes: "This same ambiguity is present in the conflicting views about the euro among its supporters: is it a currency without a state yet, or is it a currency without a state ever?"