A Future of Low Returns?

Through the dismal stock market performance and low interest rates of the last few years, many savers and investors have held on to the hope that, when the economy eventually recovered, their financial investments would start earning the sorts of returns that they did through most of the second half of the twentieth century. However, in the Credit Suisse Global Investment Returns Yearbook 2013, Elroy Dimson, Paul Marsh, and Mike Staunton poor a few buckets of cold water on these hopes in their essay,"The low-return world." (Thanks to Larry Willmore and his "Thought du Jour" blog for the pointer to this report.)

Here are a few of their figures showing the investment world as many of us summarize it in our minds--based of course on evidence from recent decades, and with something of a U.S. focus. Thus, here's a figure showing returns on equity and on debt for a number of markets around the world. equity. The bars on the right show a time-frame since 1950; the ones on the right show a time frame since 1980. Bonds have done comparatively better since 1980, because declining interest rates have meant that bonds purchased in the past--at the higher rates then prevailing--were worth more. 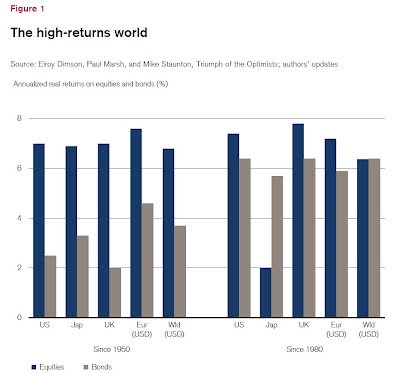 Here's a figure showing U.S. experience in the long run. The bars on the far right show how annual returns on equity have outstripped those for bonds and for bills from 1900-2012. The middle bars show a similar pattern, a bit less extreme, for the last half-century from 1963-2012. The bars on the far right show the 21st century experience from 2000-2012. Stocks have offered almost no return at all; neither have bills. Bonds have done fairly well, given the steady fall in interest rates, but as interest rates have headed toward zero, the gains from bonds seem sure to diminish, too. 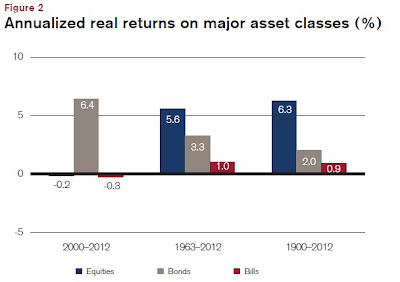 Dimson, Marsh, and Staunton have some grim news for those waiting for a bounceback to 20th century levels of returns: "[M]any investors seem to be in denial, hoping markets will soon revert to “normal.” Target returns are too high, and many asset managers still state that their long-run performance objective is to beat inflation by 6%, 7%, or even 8%. Such aims are unrealistic in today’s low-return world. ... The high equity returns of the second half of the 20th century were not normal; nor were the high bond returns of the last 30 years; and nor was the high real interest rate since 1980. While these periods may have conditioned our expectations, they were exceptional."

In thinking about bond prices in the future, they point out that central banks around the world are pledging to keep interest rates low for at least the next few years. There is little reason to think that real interest rates on bonds are rising any time soon.

In terms of equities, they restate the well-accepted insight that over time, equities will be priced in a way that will provide a higher return than bonds, to make up for the higher volatility and risk of buying equities. But how much more will stocks pay than bonds? How high will this "equity premium" be? They write:


"Until a decade ago, it was widely believed that the annualized equity premium relative to bills was over 6%. This was strongly influenced by the Ibbotson Associates Yearbook. In early 2000, this showed a historical US equity premium of 6¼% for the period 1926–99. Ibbotson’s US statistics appeared in numerous textbooks and were applied worldwide to the future as well as the past. It is now clear that this figure is too high as an estimate of the prospective equity premium. First,it overstates the long-run premium for the USA. From 1900–2012, the premium was a percentage point lower at 5.3%, as the early years of both the 20th and 21st centuries were relatively disappointing for US equities. Second, by focusing on the USA – the world’s most successful economy during the 20th century – even the 5.3% figure is likely to be an upwardly biased estimate of the experience of equity investors worldwide. .. To assume that savers can confidently expect large wealth increases from investing over the long term in the stock market – in essence, that the investment conditions of the 1990s will return – is delusional." 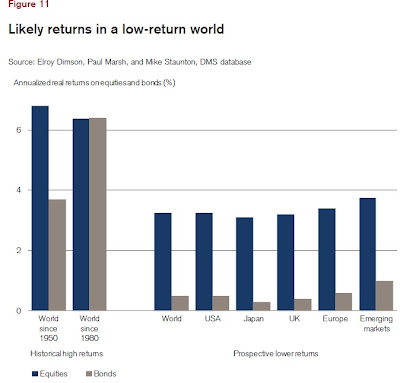 If their predictions of a low-return world over the next few decades hold up, it will impose heavy difficulties on those saving for the future--not just those doing individual saving, but also pension plans. Moreover, it can be hazardous to a solid economic recovery. They write: "Today’s low-return world is imposing stresses on investors. ... For how long are low returns bearable? For investors, we fear that the answer is “as long as it takes.” While a low-return world imposes stresses on investors and savers in an over-leveraged world recovering from a deep financial crisis, it provides essential relief for borrowers. The danger here is that if this continues too long, it creates “zombies” – businesses kept alive by low interest rates and a reluctance to write off bad loans. This can suppress creative destruction and rebuilding, and can prolong the downturn."

For those who are already retired, or on the verge, prudence suggests that you base your spending plans during retirement on these kinds of low returns. For those still saving for retirement, prudence suggests trying to save more. For those trying to figure out pension plan funding, the fund may well be worse off than you think. If rates of return on equities and bonds do rebound well above these projections, it will be a happy surprise for today's savers and investors. But the prudent don't base their plans on the hope of happy surprises.