Why are U.S, Firms Holding $5 Trillion in Cash?

One of the puzzles and frustrations of the sluggish economy since the official end of the Great Recession in June 2009 is that U.S. firms are holding enormous amounts of cash--about $5 trillion in 2011. A considerable number of pixels have been spent wondering why corporations seem so reluctant to spend, and how we might entice them to do so. But I had not know that the trend toward corporations holding more in cash very much predates the Great Recession; indeed, it was already apparent back in the 1990s. Thus, along with thinking about why events of the last few years have led corporations to hold more cash, we should be thinking about influences over the last couple of decades.

Juan M. Sánchez and Emircan Yurdagul lay out the issues in "Why Are Corporations Holding So Much Cash?" written for the Regional Economist magazine published by the Federal Reserve Bank of St. Louis.  The first graph shows "cash and short-term investments," which include all securities transferable to cash, going back to The second graph focuses just on nonfinancial, nonutility firms--thus leaving out banks, insurance companies, regulated power companies, and the like.There are some differences in timing, but the overall upward pattern is clear. 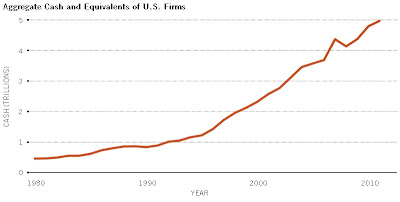 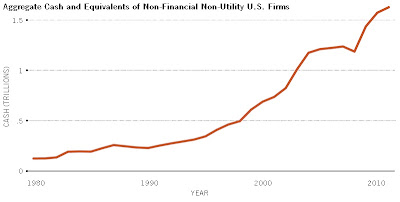 Of course, one reason for the rise in cash assets could just be overall growth of the economy. Thus, an alternative measure is to look at the ratio of cash to net assets of the firm. By this measure, which is probably more revealing, the growth of cash starts off around 1995, accelerates in the early 2000s, takes a step back in the Great Recession, and now has rebounded. 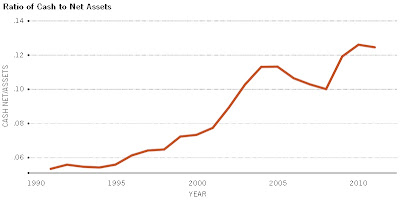 Broadly speaking, there are two reasons for firms to hold more cash: precautionary motives and repatriation taxes. Precautionary motives refer to the notion that firms operate in a situation of uncertainty, including uncertainty about what stresses or opportunities might arise, and whether they will be able to get a loan on favorable terms when they want it. Cash offers flexibility. The authors explain repatriation taxes this way: "[T]axes due to the U.S. government from corporations operating abroad are determined by the difference between the taxes already paid abroad and the taxes that U.S. tax rates would imply. Importantly, such taxation only takes place when earnings are repatriated. Therefore, firms may have incentives to keep foreign earnings abroad." To put it a little differently, if firms are thinking that they may wish to reinvest foreign profits in foreign operations, then the tax code gives them an incentive not to repatriate those profits.

Both of these factors surely make some difference, but Sánchez and Yurdagul also seek some insight into the question by looking at which industries, and which size firms, are more likely to be increasing their cash holdings. For example, information technology firms and firms focused on tech and hardware equipment are holding noticeably more in cash, although since the end of the housing bubble, building product companies have been sitting on a lot more cash, too. 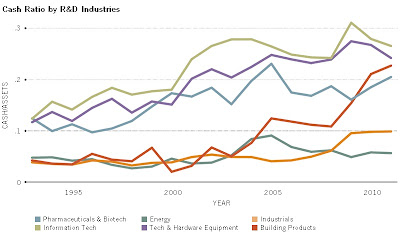 When looking by size of firm, it's smaller firms that hold more cash. In part, this surely reflects that smaller firms are more vulnerable to ups and downs, and less likely to be confident that they have access to a loan when they want it. But interestingly, it's the second-smallest quintile of firms, not the smallest, that has seen the biggest rise in cash/asset ratios. 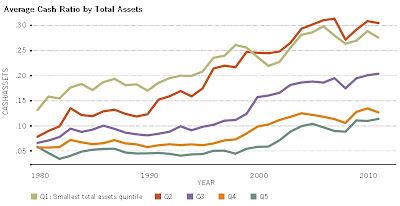 Ultimately, these arguments made me less confident that any particular policy was going to shake loose a big share of the $5 trillion cash hoard of U.S. firms. It's not quite clear to me why smallish-sized tech firms feel the need to hold so much cash, but they clearly have felt that way for a couple of decades now. In an globalizing economy, more U.S. firms are going to have foreign operations and to be focused on expanding those operations, so it's not clear to me that a much larger share of those foreign profits will be repatriated. The cash hoard of U.S. firms isn't just, or even mainly, a post-recession phenomenon.