There's a fundamental conflict between helping those in need and encouraging self-support. I sometimes say that if you give a person a fish, every day, then you remove that person's incentive to learn to fish. But if you vow not give them a fish, they may starve to death while learning to fish.

C. Eugene Steuerle explores the current state of this conflict in "Labor Force Participation, Taxes, and the Nation’s Social Welfare System," which is testimony given to the Committee on Oversight and Government Reform of the U.S. House of Representatives on February 14, 2013. As a starting point, focus first on the support that we give to those in need. Steuerle writes:

"Figures 1 and 2 display the benefits available to a single mother with two children in 2011 under these two cases. The first case, what I call the “universal” case, shows the benefits available to anyone whose income was low enough to qualify for them, namely nutrition assistance and tax benefits. The second case adds to those benefits narrower assistance—TANF and housing subsidies and supplements to nutrition assistance—that is available to some households but not to others based on availability, time limits, and other criteria. Because health reform will soon alter the delivery of health benefits in an important way, in both cases I assume that the provisions of the Affordable Care Act are in effect."

It's useful to remember that these graphs do not refer to cash benefits, and they represent averages that will vary across families. For example, the amount that families receive in Medicaid benefits is not received in cash, but in the form of access to health care services, and the amount will vary from year to year, depending on health. I find the details of these figures interesting for what they reveal about the size of spending and support from different programs and the income range over which programs operate. For example, the figures highlight that SNAP, more commonly known as "food stamps," is a substantially larger program than TANF, more commonly known as "welfare." The figures also show the relatively large size of health care benefits like Medicaid, CHIP, and the "exchange subsidy" compared with other forms of benefits, following a pattern that as a society we are willing to pay large health care bills for those with low incomes, or to give them food stamps, but we are less willing to give them cash benefits.

But the main point that Steuerle emphasizes is in the overall hump shape of the curves: that is more support for those at lower incomes, and then declining support as income rises. This pattern makes perfect sense: more fish for those with very low incomes, less fish as people learn to fish and bring in their own income. But it also means that those with low incomes face what economists call a "negative income tax."

A "positive" income tax is the usual tax in which, as you earn additional income, the government taxes a percentage. A "negative" income tax arises when, as you earn additional income, the government phases out benefits it would otherwise have provided. Both kinds of taxes have the same  result on incentives: when you earn an additional marginal dollar of income, you take home less than a dollar after taxes. When social programs phase out quickly as income rises, then a situation can arise where earning an additional dollar of income means losing 50 cents or more in benefits--thus greatly reducing the incentives to work.

Here are the effective marginal tax rates as Steuerle calculates them. That is, adding together both the "positive" tax rates of federal income taxes, state taxes, and payroll taxes for Social Security and Medicare, together with the implicit "negative" tax rates of the phase-out of social programs, what is the effective tax rate on a marginal dollar of income as income rises. Notice how the phase-out of social programs--that is, how their support declines as earned income rises--leads to a spike in the overall "effective" marginal tax rates that people experience at around $10,000-$15,000 in earned income. 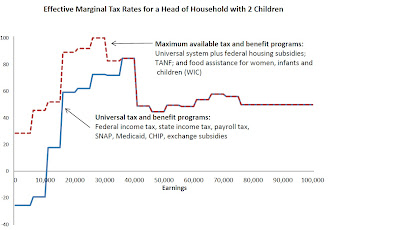 Of course, if you're someone who doesn't believe that marginal tax rates affect work effort, then this sort of chart won't bother you. Personally, I'm concerned about the effects of marginal tax rates on incentives not just at the top of the income scale, and not just at the bottom of the income scale, but at all income levels.


Those interested in this subject might also see my post of November 16, 2012, based on a report from the Congressional Budget Office, about  "Marginal Tax Rates on the Poor and Lower Middle Class."