The rise in American rates of obesity can be traced back to what seems like a fairly small rise in daily calories consumed, I learned this lesson from an article on the causes of obesity about 10 years back in my own Journal of Economic Perspectives. In "Why Have Americans Become More Obese?" David M. Cutler, Edward L. Glaeser and Jesse M. Shapiro wrote that the "10- to 12-pound increase in median weight we observe in the past two decades requires a net caloric imbalance of about 100 to 150 calories per day. These calorie numbers are strikingly small. One hundred and fifty calories per day is three Oreo cookies or one can of Pepsi. It is about a mile and a half of walking."

Elizabeth Frazao, Hayden Stewart, Jeffrey Hyman, and Andrea Carlson apply a similar logic in "Gobbling Up Snacks: Cause or Potential Cure for Childhood Obesity?" which appears in the n the December 2012 issue of Amber Waves, published by the Economic Research Service at the U.S. Department of Agriculture.

When I was a child, my mother had a clear-cut policy on before-dinner snacks: I was allowed to eat all the raw carrots I wanted. The parental philosophy appears to have gone out of date. The USDA economists explain: "Consumption of snacks among children has increased markedly over the last 35 years. In the late 1970s, American children consumed an average of only one snack a day. Today, they are consuming nearly three snacks per day. As a result, daily calories from children's snacks have increased by almost 200 calories over the period." They propose that a shift to healthier snacks could play a useful role in cutting childhood obesity.

As a starting point, here's a table showing the calorie count for some fruit and vegetable stacks, compared with some commonly consumed snack foods. As a parent of three, I confess that I can't see my children snacking on broccoli florets. But grapes, strawberries, cantaloupe, or apples are all possibilities, and even among the snack foods, some choices like popsicles or fruit rolls are at least better than the alternatives. 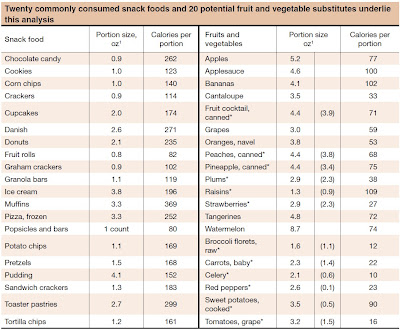 One common reaction to this sort of list is that the healthy snacks cost too much. It is true that cookies, crackers, and chips make a relatively cheap snack, and some of the healthier choices, like tangerines, grape tomatoes, and strawberries are a costlier snack. But some of the unhealthy choices like muffins and Danish are also on the costly side, while bananas, oranges, and those good old carrot sticks are not especially pricey. Here are their calculations of cost-per-snack. 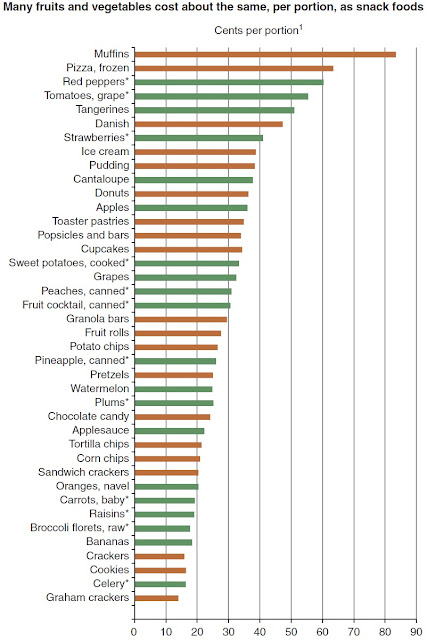 Generalizing wildly from personal experience, as social scientists are wont to do, it feels to me as if a cultural shift has occurred about a "suitable" snack. Two of my children were, at different times, in soccer leagues where the parents organized themselves to make sure that each child got a "treat" of a cookie or chips and a large sugared drink after each game. When I coached a different youth soccer team, I brought bags of orange and apple slices for the players. As far as I could tell, the kids were equally happy with the oranges--at least once it was clear that cookies and chips would not be forthcoming.

Consuming healthier (and fewer) snacks could make a real difference to child obesity--and it makes sense for adults, too.