How Well Do U.S. Students Read?

In the Fall 2012 issue of Future of Children, Sean F. Reardon, Rachel A. Valentino, and Kenneth A. Shores consider "Patterns of Literacy among U.S. Students."

Of course, "literacy" is a somewhat elastic term, ranging from the most basic functional literacy that lets a person handle day-to-day tasks like reading a map or a drive-through menu, up to the ability to read more complex and specialized texts with comprehension of strengths and weaknesses. Here's a figure showing various dimensions of literacy and how U.S. children are performing. Nearly all children manage the basics like letter recognition, and beginning and ending sounds, by second grade. But even by 8th grade, a large share of students have real problems with being able to real well enough to evaluate text, especially when faced with nonfiction or with complex syntax. 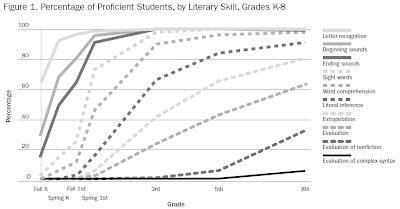 What are the trends in literacy over time? Performance hasn't changed much. Here's a figure showing reading and math test scores on the National Assessment of Educational Progress (NAEP) tests, from 1971 to 2008. There appears to be a bit of rise for 9 year-old readers in recent years, but at least so far, that hasn't translated to higher reading scores for 13 or 17 year-olds. 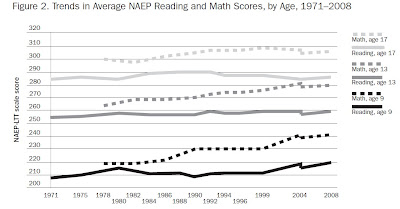 Of course, these figures are averages, and it's always important to remember the tails of the distribution. "At any given age, students vary considerably in their literacy abilities. For example, at age nine, students scoring at the 10th percentile can carry out simple discrete reading tasks
(such as following brief written directions), while students scoring at the 90th percentile
are already able to make generalizations and interrelate ideas. ... Roughly 10 percent of seventeen-year-olds have knowledge-based competencies lower than those of the median nine-year-old
student."


How does the literacy of U.S. students stack up against those in other high-income countries?

"On international comparisons, American students perform modestly above average compared with those in other OECD countries, and well above average among the larger set of countries for which the PIRLS [Progress in International Reading Literacy Study] and PISA [Programme for International Student Assessment] studies provide comparative data. Moreover, there is no evidence that U.S. students lose ground relative to those in other countries during the middle-school years.
Between ages ten and fifteen, when most students are learning crucial comprehension and evaluation literacy skills, students in the United States appear to learn at a rate that places them at the average among OECD countries. This evidence of average to above-average performance of U.S. students on
literacy assessments is in stark contrast to the poor relative performance of U.S. students on internationally administered math and science assessments."

And with that comment the authors touch on a point that nags at me from time to time. Literacy sounds like a  doesn't always get the attention of STEM education: that is, science, technology, engineering, and mathematics. Literacy lacks a cute acronym. It's a softer subject in some ways: teaching about deeper levels of comprehension can't be as black-and-white as balancing a chemical formula or solving a geometry problem.  As the authors suggest at various points, the curriculum pathway to teaching literacy and spoken skills after the most basic level is less clear-cut.

But as I often try to emphasize with students, a national economy is not like an Olympic team, where a few performers can win medals while the rest of us couch potatoes sit at home and watch. In the economy, the vast majority of adults participate, and the economy performs better when workers at all levels have more human capital. For many workers, literacy is much more at the core of their job responsibilities than are specific technical or statistical capabilities. Reardon, Valentino, and Shores offer a useful reminder on the core importance  of literacy:

"Literacy—the ability to access, evaluate, and integrate information from a wide range of textual sources—is a prerequisite not only for individual educational success but for upward mobility both socially and economically. In addition, because much of the growth in the economy in recent decades has been in areas requiring moderate- to high-level literacy skills, economic growth in the United
States relies increasingly on the literacy skills of the labor force. Finally, in an information-rich age, thoughtful participation in democratic processes requires citizens who can read, interpret, and evaluate a multitude of often-conflicting information and opinions regarding social and political choices."