I am congenitally suspicious of surveys in which people are asked about whether they have acted in charitable ways. But nonetheless, the World Giving Index 2013, which is published by the Charities Aid Foundation based on survey data collected around the world by Gallup, offers all sorts of room for rumination. The survey asks whether a person has participated in three kinds of charitable behavior in the previous month: helping a stranger, donating money, or volunteering. It doesn't ask about the quantities of these behaviors: how much help, how much money, or how many hours of volunteering. But as a sort of Rorshach test to stimulate speculation and story-telling, here are some main findings.

First, here are the top-ranked countries, where the overall ranking is determined as the average of the percentages of those who say that they participated in one of the three behaviors. The U.S. ranks first, thanks in large part to the very high score on "helping a stranger." 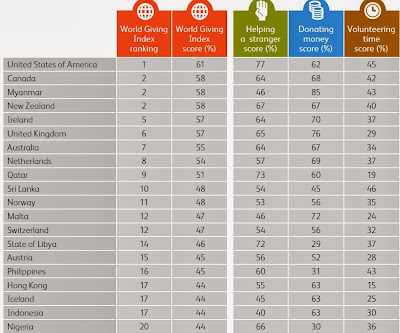 And here are the bottom 10 countries for these giving behaviors. One might expect that countries which have experienced different kinds of civil strife might rank lower on giving, which holds true in different ways for a number of these countries. But I find it remarkable that in China, only 33% of people report helping a stranger, 10% report giving money, and 4% report volunteering. And in Greece, these percentages are as low or lower. Perhaps this is a sign that in China, people don't want to answer questions from surveys? Perhaps in Greece, it's a sign that the social divisions following from the economic turmoil of the last few years are leaving a scar? As I said, these kinds of tables are an inkblot where you can tell your own story.

Here are the top ten and bottom 10 countries for each of the behaviors separately. In helping a stranger, the US ranks first, followed by the highly heterogenous list of Qatar, Libya, Colombia, and Senegal. 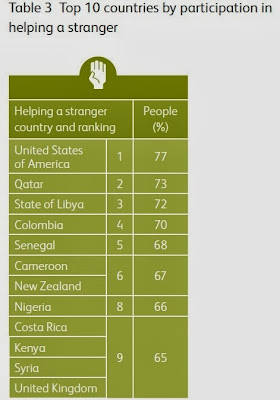 Here are the bottom 10 countries for helping a stranger. Remember that these are survey data. In these countries, less than 30% of people report to the survey that they have helped a stranger in the previous month. 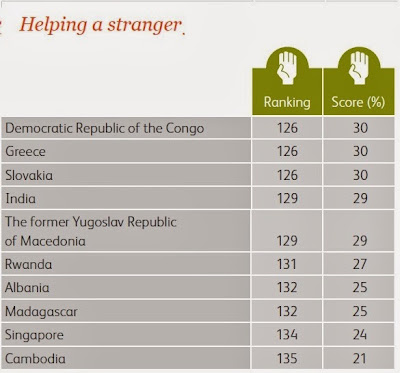 In the percentage of those having given money, Myanmar (!?!) ranks at the top, followed by the United Kingdom, Malta, Ireland, and Thailand. 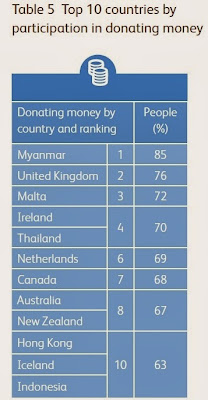 In the bottom 10 countries of those who report giving money, 8% or fewer of all respondents say that they have given money in the previous month. A few of these countries have low levels of per capita income, like Niger and Mali. But a number of others--Russia, Ukraine, Georgia, Greece, Armenia--are not especially low-income by world standards. 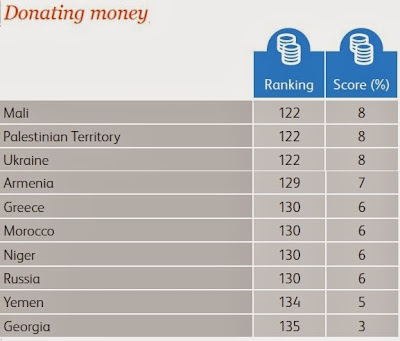 In the percentage of those volunteering time, Turkmenistan leads the way, with Tajikistan and Uzbekistan also in the top 10, with Sri Lanka, the US, Myanmar, and the Phillipines, also ranked near the top. 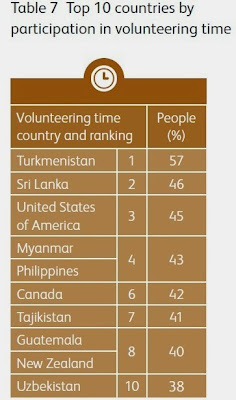 And here are the bottom 10 countries, in which 7% or fewer of respondents say that they have given time in the last month. 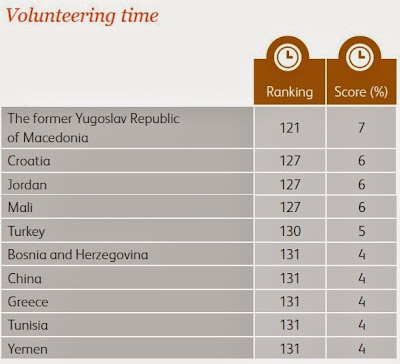 These survey responses are distinctive enough that it feels to me as if they mean something. But I don't know if the appropriate stories need to be told on a country-by-country basis, or if one can make useful arguments about patterns across certain areas or regions. Let the hypothesizing begin.