Claudia Goldin delivered the Presidential Address at the American Economic Association meetings last week entitled ""A Grand Gender Convergence: Its Last Chapter."  The talk is traditionally published in a few months in the American Economic Review. But a pre-copy-edited final draft version is available at Goldin's website here.

Goldin points out that the ratio of the median woman's wage to the median man's wage has been closing over time: "The mantra of the women’s movement in the 1970s was `59 cents on the dollar' and a more recent crusade for pay equality has adopted `77 cents on the dollar.'" (For a post from last September on this change, see here.) A substantial part of this change is that what economists call the "human capital" characteristics of women--often measured by educational attainment and years of  workforce experience--now look quite similar to those of men. So why does a gender wage gap remain? Goldin argues: "As women have increased their productivity enhancing characteristics and as they `look'
more like men, the human capital part of the wage difference has been squeezed out. What remains is largely how firms reward individuals who differ in their desire for various amenities. These amenities are various aspects of workplace flexibility. Workplace flexibility is a complicated, multidimensional concept. The term includes the number of hours to be worked  and also the need to work particular hours, to be “on call,” give “face time,” be around for clients, be present for group meetings and so forth."

The typical pattern here is that women have a fairly small gender wage gap when they first start their careers. However, as women reach their child-bearing and child-raising years, the gender wage gap opens up. Women who don't have children experience a much smaller gender wage gap. In addition, Goldin shows that this pattern commonly exists within many different occupations, although the size of the wage gap does vary across occupations.  She writes: "The main takeaway is that what is going on within occupations—even when there are 469 of them as in the case of the Census and ACS [data]—is far more important to the gender gap in earnings than is the distribution of men and women by occupations. ... If earnings gaps within occupations are more important  than the distribution of individuals by occupations then looking at specific occupations should  provide further evidence on how to equalize earnings by gender. Furthermore, it means that changing the gender mix of occupations will not do the trick."

Here's a figure showing the overall pattern. Each of the lines is a birth year for women. The horizontal axis shows the age of the woman. The vertical axis shows the gender wage gap at that age. The vertical axis is measured on a logarithmic scale, and for those who aren't familiar with that scale, Goldin inserts the percentage wage gap in brackets. You can see that the lines for women born more recently are higher on the graph, which shows that the gender wage gap is diminishing over time. You can also see that from about age 25 up to about age 40, the gender wage gap expands, whereas after about age 45, it contracts. 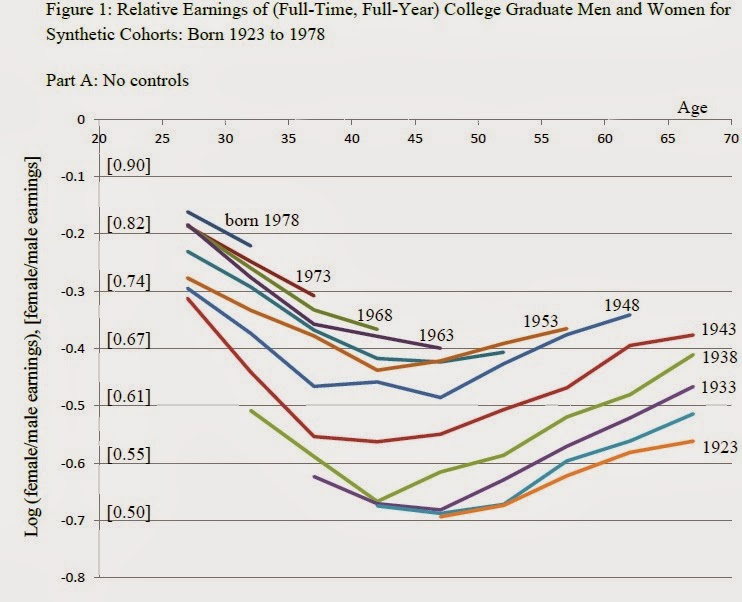 As an example of a linear career, Goldin points to pharmacists. (For a detailed analysis of pharmacists, see "The Most Egalitarian of All Professions: Pharmacy and the Evolution of a Family-Friendly
Occupation," by Claudia Goldin and Lawrence F. Katz, National Bureau of Economic Research Working Paper #18410, September 2012). Women were less than 10% of all pharmacists back in the 1960s, and are now more than half. But the nature of the job has also changed. Back in the 1960s, about two-thirds of all pharmacists were independent; now, only about 15% are independent, and the rest work for big organizations like hospitals or drugstore chains. Pharmacists who work part-time earn about the same hourly wage as those who work full-time, or more than full-time. Goldin explains what is behind this pattern:

"Pharmacists have become better substitutes for each other with the increased standardization of procedures and drugs. The extensive use of computer systems that track clients across pharmacies, insurance companies and physicians mean that any licensed pharmacist knows a client’s needs as well as any other. If a pharmacist is assisting a customer and takes a break, another can seamlessly step in. In consequence, there is little change in productivity for short-hour workers and for those with labor force breaks. ... [T]here is less need for interdependent teams in pharmacy and for extensive contact with other employees. Female pharmacists have fairly high labor force participation rates and only a small fraction have substantial interruptions from employment. Rather than taking off time, female pharmacists with children go on part-time schedules. In fact, more than 40 percent of female pharmacists with children work part-time from the time they are in their early thirties to about 50 years old. Male pharmacists work around 45 hours a week, about nine hours more than the average female pharmacist. The position of pharmacist became among the most egalitarian of all professions today."

Goldin points out that a variety of occupations are moving in the "linear" direction, where there is little or no smaller career penalty for working part-time, or even taking some extended leave. So what will the last chapter of gender workplace convergence look like? Goldin explains:

"The last chapter must be concerned with how worker time is allocated, used and remunerated and it must involve a reduction in the dependence of remuneration on particular segments of time. It must involve greater independence and autonomy for workers and the ability of workers to substitute seamlessly for each other. Flexibility at work has become a code word to mean shorter hours. It also means temporal flexibility such that total hours worked are the same. Flexibility is of little value, however, if it comes as a high price. There are many occupations that have moved in the direction of less costly flexibility. ... Some changes have occurred organically often due to economies of scale (as in the cases of physicians, pharmacists and veterinarians), some changes have been prompted by pressure on the part of employees (as in the case of various physician specialties such as pediatricians), and yet other changes have occurred because of a desire to reduce costs. What the last chapter must contain for gender equality is not a zero sum game in which women gain and men lose. Many workers will benefit from greater flexibility, although those who do not value the amenity will likely lose from its lower price. The rapidly growing sectors of the economy and newer industries and occupations, such as those in health and information technologies, appear to be moving in the direction of more flexibility and greater linearity of earnings with respect to time worked. The last chapter needs much more of that."