To its credit, the U.S. Office of Management and Budget keeps a list of "High-Error Programs," which is roughly defined programs that pay out $750 million or more improperly. Here's the list for 2012.
In thinking about where the problem is most severe, the last two columns are where to focus. The last column on the right shows what proportion of payments are made in error; the second column on the right shows the amount of the improper payments. Again, these numbers are official estimates from the U.S. government, not wild-eyed claims by opponents of these programs. 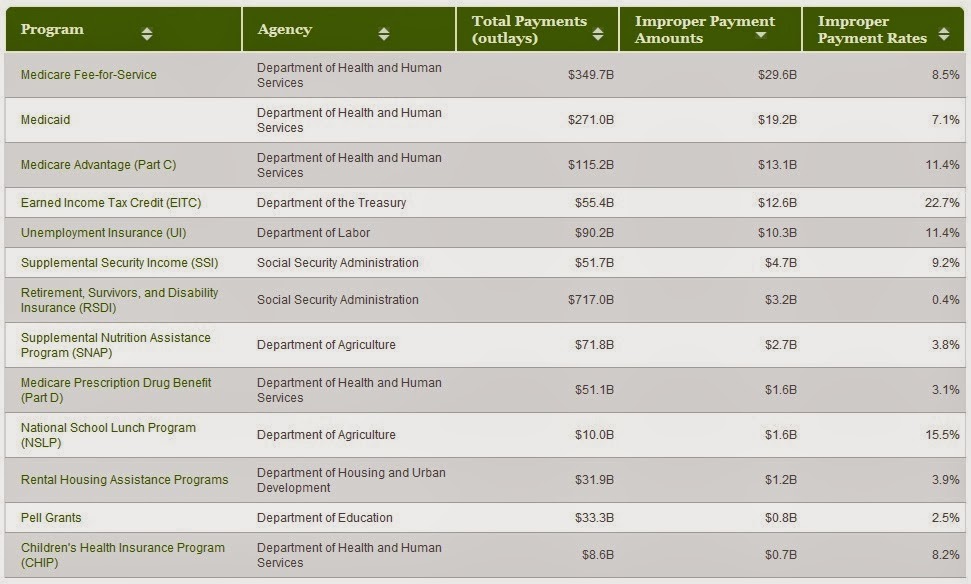 Even for a flinty-hearted economist like myself, some of these examples bother me more than others. For example, the school lunch program has a fairly high 15.5% rate of improper payments, but it seems to me unlikely that anyone in school cafeterias across the country is getting rich off these payments. My guess is that many of these improper payments are to children whose families are only borderline ineligible for the programs. And providing food in schools that serve low-income populations is a reasonable policy goal.

Or the Social Security programs that handle Retirement, Survivor's and Disability Insurance make the list because there is a low error rate (0.4%) on a very large amount of total spending ($717 billion).

But some of the other categories are more troubling. It's troubling that the top three programs on the list all involve health care spending through Medicare and Medicaid, and total $61.9 billion in improper payments. As the US is struggling to implement a new system of health insurance under the Affordable Care Act, with heavy and occasionally capricious government oversight, the table suggest that the federal government is not well-situated to oversee day-to-day medical interactions and decisions.

While I'm a fan of the Earned Income Tax Credit, the 22.4% rate of improper payments is nonetheless striking and disheartening. As I discussed here, the problem seems to be a mixture of people whose economic and family lives are often in flux and who often have no particular facility for filling out detailed paperwork and records, combined with a complex set of government rules. Throw some opportunistic fraud into the mixture as well, and the overpayment rate gets high.