The Status of Microfinance

The United Nations declared 2005 the Year of Microcredit. In 2006, the Nobel Peace Prize was awarded to Mohammad Yunus and the Grameen Bank in Bangladesh. But more recently, the Bangladeshi government pressured Yunus out of the Grameen Bank, has tried to prosecute  him for tax fraud on what looks like frail evidence, and has proposed dismantling Grameen into 19 separate banks. A scandal erupted in India, where a microfinance lender based in Andhra Pradesh was accused of driving over 50 borrowers to commit suicide by shaming and threatening when they could not repay their small loans on schedule. David Roodman sorts out the evidence on the current state of microfinance in  "Armageddon or Adolescence? Making Sense of Microfinance’s Recent Travails,"  written as Center for Global Development Policy Paper 35 (January 2014).

The first fact to recognize is that microfinance has expanded a great deal, reaching nearly $80 billion and with a considerable presence all around the world. The number of microloans outstanding topped 90 million in 2010, before declining in 2011 as a result of broad economic turmoil in the world economy and the fact that microfinance dried up in several regions and countries. 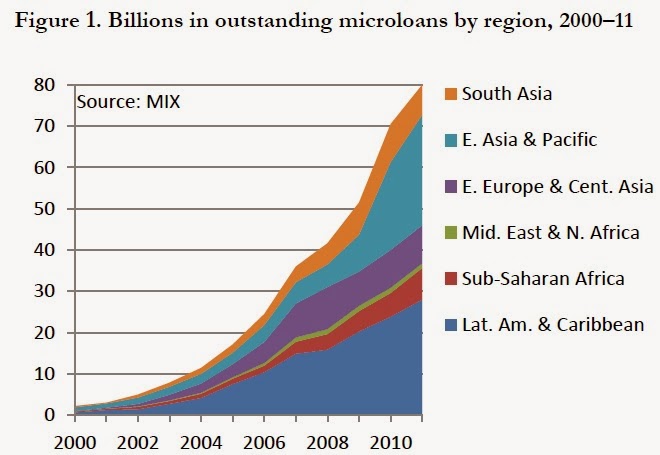 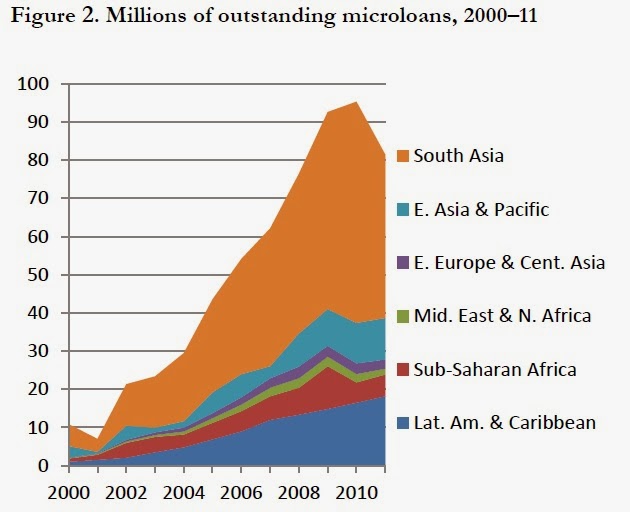 Roodman goes into some detail about the financial condition of microfinance institutions. Short story: they often benefit from being able to raise capital very cheaply, through donors or loans to them made at below-market interest rates.  However, with a few notable exceptions like the microfinance institutions in Andhra Pradesh, they are then able to operate in a reasonably self-sufficient way, with repayments of previous loans funding new loans. Moreover, a number of microfinance institutions are migrating away from just giving loans, and are starting to provide a fuller range of financial services to those with low and unstable incomes, including setting up bank deposits and facilitating domestic and international money transfers.

Roodman also reviews the evidence that the benefits of microfinance have been misunderstood and misstated. The common belief is that microfinance helps low-income people start businesses, which can then lift them out of poverty. But the best and most recent economic studies find that while microfinance does help start some businesses, the effect on poverty for those receiving the small loans is negligible. Of course, future studies may come up with different results. But for now, the strongest benefits from microfinance seem to be that it enables those with very low incomes to have greater control over their lives. They can borrow to buy a durable good. They can have a place where their savings are secure, or where they can transfer money. Moreover, from a social point of view, microfinance organizations are developing the organizational and managerial capabilities to operate like standard banks.

The microfinance industry has gotten large enough that it also attracting private-sector capital. In one sense, being able to tap into private-sector financial markets is a sign of the demonstrated strength and viability of the microfinance industry. But it inevitably brings controversy when some people or organizations do well by providing goods and services to the poor. And in some cases, the institutions expanding into microfinance may take advantage of the lack of regulation and consumer protection in these economies, and the lack of sophistication from a number of their borrowers, to act in an predatory and unscrupulous manner. Roodman summarizes some key lessons for the current state of microfinance in this way:

"In the sweep of history, countries that are wealthy today have had the most time to learn
hard lessons (and sometimes forget them). In these nations, the lending system includes such actors as retail lenders; investors therein; credit information bureaus; and regulatory bodies that limit and monitor aspects of credit products such as term, term disclosure, even pricing. For institutions that take deposits, additional regulators come knocking—to insure those deposits or ensure that under ordinary circumstances capital is on hand to absorb losses and meet withdrawal demands. A truth often overlooked in excitement about microfinance as a retail service model is that it is no exception to this need for companion institutions. If anything, the need is greater when targeting the poor. ...

"Microfinance has been growing for 35 years and now reaches upwards of 100 million people, who cannot all be wrong in their judgments about the utility of microfinance. Moreover, most of them are served by institutions that are nearly or completely self-sufficient in financial terms; these MFIs [microfinance institutions] do not depend greatly on outside subsidies ... Because of the vicissitudes of poverty, poor people need financial services more than the rich. Their financial options will always be inferior—that’s part of being poor—and microfinance offers additional options with distinctive strengths and weaknesses.

"The microfinance industry has demonstrated an ability to build enduring institutions to
deliver a variety of inherently useful services on a large scale. Nevertheless, the recent travails are signs that something is wrong in the industry. What is wrong is, ironically, what was once so right about the industry: it largely bypassed governments in favor of an experimental, bottom-up approach to institution building. The industry got so good at building institutions and injecting funds into them that it often forgot that a durable financial system consists of more than retail institutions and their investors. The narrow focus became a widening problem as microfinance grew. ... To mature, the industry and its supporters should recognize the imbalance it has created. Where possible, they should work to strengthen institutions of moderation such as credit bureaus and regulators. Accepting that such institutions will often be weak, they should err on the side of investing less. In microfinance funding, less is sometimes more."