Why the Uninsured Don't Have More Emergency Room Visits

Here's a hypothesis: If people who don't have health insurance were covered, then they could get preventive care before they became sick and go to primary care doctors when they were a little sick, instead of going to emergency rooms after the symptoms get even worse. Thus, giving them health insurance would cut costs by reducing the number of more costly emergency room visits and also improve health outcomes.

What's the best way to get evidence on how whether hypothesis holds true? Or how large the cost savings or health effects might be? Well, imagine a situation in which a state looks at a group of 90,000 people who lack health insurance, and randomly selects 10,000 of them to receive government-provided health insurance. As long as the observable characteristics of the group that get health insurance look the same as those who didn't (and this can be checked by a researcher), then one can reasonably compare the outcomes for those who got health insurance with those that didn't.

But where to find such an experiment. The answer is "Oregon." Back in 2008, Oregon wanted to expand health insurance coverage, but it only had enough money to cover 10,000 people. So it held a lottery, which attracted 90,000 applicants, and then selected the 10,000 people at random. Since then, a group of economists and public health researchers have been collecting evidence. Their latest publication is "Medicaid Increases Emergency-Department Use: Evidence from Oregon's Health Insurance Experiment," by Sarah L. Taubman, Heidi L. Allen, Bill J. Wright, Katherine Baicker, and Amy N. Finkelstein. It was published on-line by Science magazine on January 2, and if you don't have access through a personal or library subscription, it is available with free if clunky registration.

They find that health insurance leads to more emergency room visits, not fewer. From the abstract of their paper: "We find that Medicaid coverage significantly increases overall emergency use by 0.41 visits per person, or 40 percent relative to an average of 1.02 visits per person in the control group. We find increases in emergency-department visits across a broad range of types of visits, conditions, and subgroups, including increases in visits for conditions that may be most readily treatable in primary care settings." 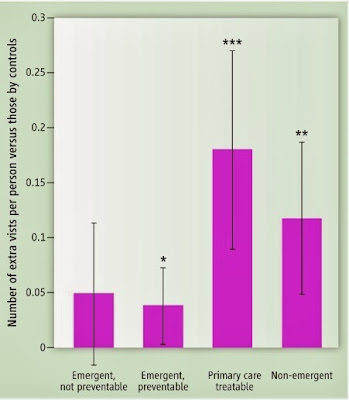 But whatever the justifications for higher emergency room use, the pattern itself seems clear. If health insurance is expanded, there are likely to be more patients in emergency rooms, not fewer. Fisman writes:

If all goes as planned, many more Americans will soon be covered by some type of health insurance. Although much of the United States looks very different from white, liberal, urban Portland, and the OHIE [Oregon Health Insurance Experiment] involved a small, rather than universal, expansion in coverage, there is no obvious reason to expect that insurance will have drastically different effects elsewhere. That is, based on this paper’s findings, we have good reason to anticipate a large increase—and almost surely not a decrease—in traffic to already overburdened emergency departments across the country. Whether or not you think universal coverage is a good idea, we had better start planning for it.  Clearly, the answer is unlikely to be just increasing ER budgets to accommodate more patients: There are surely better ways to manage health delivery to low-income populations, particularly with an eye to long-term preventive care rather than short-term treatment.

This paper is the third published study of the Oregon Health Insurance Experiment, as it is coming to be called. The first paper, published in the Quarterly Journal of Economics in August 2012, noted that those who received health insurance utilized more health care and reported less financial stress over paying for health care. The second paper, published in the New England Journal of Medicine, May 2, 2013. It found that "Medicaid coverage had no significant effect on the prevalence or diagnosis of hypertension or high cholesterol levels or on the use of medication for these conditions. It increased the probability of a diagnosis of diabetes and the use of medication for diabetes, but it had no significant effect on the prevalence of measured glycated hemoglobin levels of 6.5% or higher. Medicaid coverage led to a substantial reduction in the risk of a positive screening result for depression. This pattern of findings with respect to clinically measured health — an improvement in mental health but not in physical health ..."

In short, the evidence so far from the Oregon health insurance experiment shows that those who receive health insurance consume more health care, including emergency room care, and also that measures of their mental health seem to improve (less financial stress from health care costs, reduced diagnoses of depression). However, the evidence so far does not suggest that actual physical health status is improved by having health insurance. This is perhaps not a huge surprise, given that the accumulated evidence covers only a couple of years. We know that actual health outcomes are more a function of diet, exercise, smoking, drinking, violence and so on, rather than access to health care.
Posted by Timothy Taylor at 6:00 AM